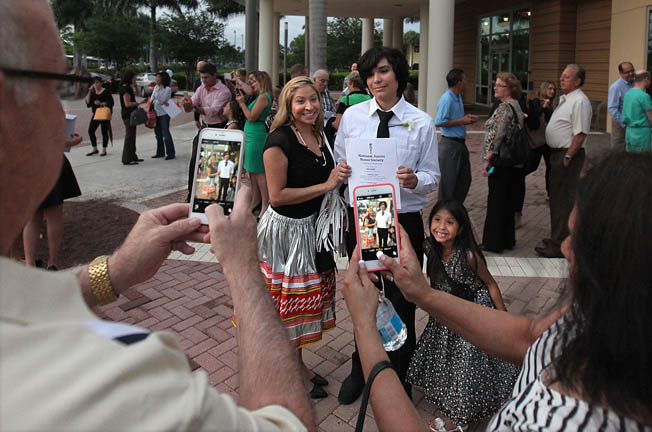 But the eighth-grader, who attends University School at Nova Southeastern University in Davie, knows that fun is also learning something new every day, earning high grades and being part of an elite group of academic achievers called the National Junior Honor Society (NJHS).

“It’s a good thing to be part of something with other kids like me who are also in the honor society and it’s something that will help me later in high school and college,” he said.

Sitting among hundreds of his peers and an audience filled with parents and family members, Kian was one of 98 students inducted into the 86-year-old organization May 5 at the school’s Epstein Center for the Arts. Additionally, 25 students were inducted into the National Junior Art Honor Society.

Kian, the son of Larissa Tucker, a single mother and full-time aide in the Tribal Secretary’s Office in Hollywood, said her son is simply “a good person.” He mentors younger children daily at the Boys & Girls Club, performs plenty of chores around the house and keeps a watchful eye out for his little sister, Kiori, 6.

Tucker said her son’s education is the most important thing in his life and the scholarship that comes from the Tribe to pay for the private school is a blessing and a gift.

“A student has to be smart to go to University School,” Tucker said. “It’s hard, but he’s doing it fine. He turned down tutoring and told me he’d prove that he doesn’t need it – which he does over and over.”

She worried though that rumored cuts in the Tribe’s education budget could threaten the future of education for successful students like Kian. Two other Seminole Tribe teenagers, Jaden Bankston and Xiora Osceola, are also current members of the University School chapter’s NJHS.

“For kids like this, who do so well, the threat of losing their scholarships is very scary,” Tucker said. “We have to get the word out that the program is working.”

Kian’s grandmother Laura Billie-Shannon and Billie’s husband, Richard Shannon, who Kian calls his grandfather, also attended the NJHS induction. Both gushed with happiness after the ceremony while posing for family photographs.

“This is what grandparents live for,” Shannon said.

Billie gave credit to her daughter – and she thanked God.

“It’s a chaotic world we live in. To raise kids in this day and age is hard work … but let the glory go to God,” Billie said.

Kian said he likes attending University School. He daydreams about someday being a medical student at NSU’s College of Osteopathic Medicine and then becoming a surgeon.

Meanwhile, the overachiever is fine with keeping his grades up, assisting at the Boys & Girls Club and helping his mother with chores – which lately have included creating a front yard garden complete with flowers, bird feeders and decorative rocks.

Tucker said her son insisted on complementing the white garden rocks and the black soil with red mulch and yellow accents to symbolize the Seminole medicine colors.

“It makes sense to me, living on the reservation where the Seminole flag waves. It’s patriotic,” Kian said.