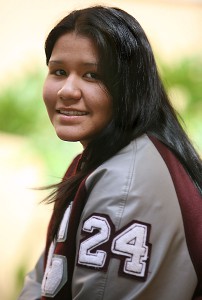 CHOCTAW, Miss. — Some girls just wanna have fun, as the song says. Maleah Isaac, 18, finds the most fun playing basketball.

“I have to play basketball. I get to know people, I make friends and I love the competition,” Isaac said.

The senior, in her first year at Choctaw Central High School in Choctaw, Miss., will graduate this spring having put her love of the game to the test. She moved to Choctaw to play with a more competitive, seasoned team, and the strapping forward helped bring the Choctaw Lady Warriors to a district championship win in February and then to the state regional semifinals. Originally from Brighton, she moved to Hollywood and played for Hollywood Christian School for three years.

Isaac has always been athletic, said her mother, Gwen Spiva. She started playing sports at the Tribe’s Recreation Department in Hollywood before first grade.

“Even at age 5 she was out there playing softball,” Spiva said. “When all the other kids would stand there in the field being cute, Maleah was in the outfield running after every ball, grabbing the ball up and throwing it in.”

Isaac got hooked on basketball at age 8. At Hollywood Christian, she added volleyball to her list of favorite sports. This year, Isaac diversified further when she joined Choctaw’s track team.

“I don’t really worry about where I will go to college. I just want to play basketball there,” she said.

But while basketball is a must-do, the A-B honor student knows that college hoop dreams won’t come true without shooting for a good education. Inspired by her mother’s past career as a teacher at the Tribe’s Preschool in Hollywood, Isaac plans to double major in business and early childhood development.

Recent weeks have been spent trying out for junior college teams in Mississippi. Spiva said Isaac will be a walk-on, as Spiva was decades ago when she played basketball for Meridian Community College, also in Mississippi.

After graduation, Isaac hopes to build and manage a Tribal preschool in Mississippi.

“I love to be around kids,” she said. “It’s what everyone says I am good at – I’m about making children smile.”

She was a frequent volunteer for the Hollywood Boys & Girls Club, and Spiva said children gravitate to her daughter.

“She’d always have kids gathered around her. She wants to help out and make everyone happy,” Spiva said.

But Isaac did not realize the importance of her gift until after she endured middle school – then turned the bullies into her friends simply by being herself. In Isaac’s world, whether volunteering in the community or entertaining her many cousins, no child is mistreated or left out and everyone gets a chance to shine, whether they are first-time athletes or stars of the team.

Giving herself to others is important.

She once envisioned becoming a Seminole Police Officer, so she spent a summer volunteering with the department. Last year, as a junior at Hollywood Christian, Isaac was one of 60 students picked from hundreds nationwide to travel with the faith-based People to People Ambassador Program to Australia where she helped minister to aboriginal Tribes – and went scuba diving in the Great Barrier Reef.

“I love being active. I won’t sit still,” she said. “Basically, my love for sports and children is where my life will take me.”