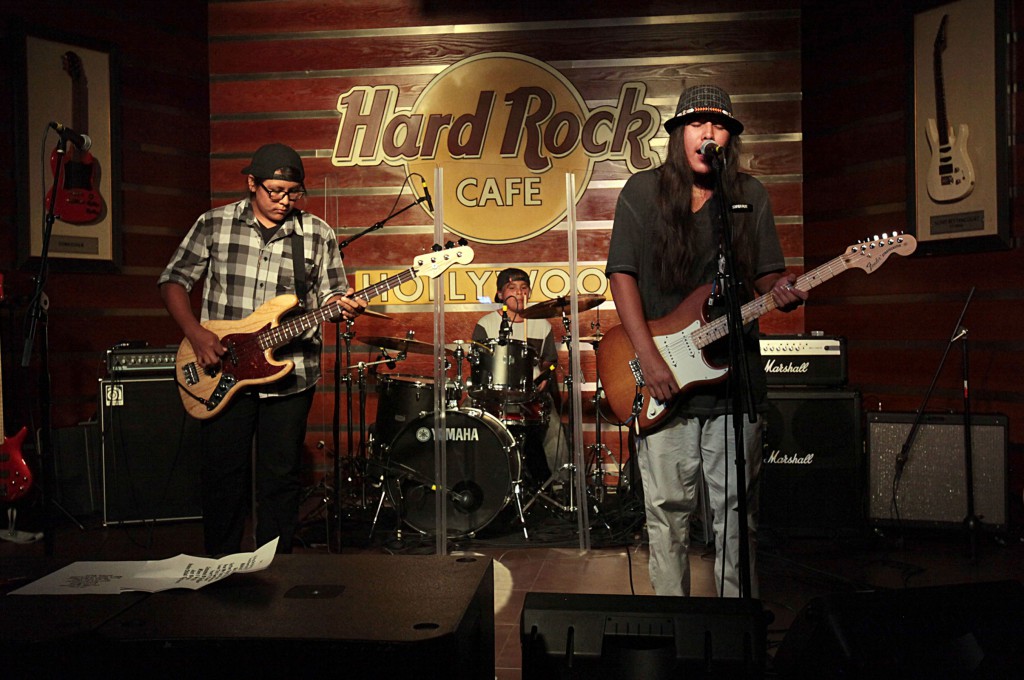 HOLLYWOOD — Between school, Police Explorers, baseball and lacrosse, it’s a wonder the Osceola brothers can find time to play music together. But, they do manage to find plenty of time to perform for their fans. The Osceola Brothers Band, comprised of Cameron on guitar, Tyson on bass and Sheldon on drums, has played for crowds for two years and recently performed for the first time at the Hard Rock Cafe in Hollywood.

“Over the years our style has changed,” said Cameron, 16, an 11th-grader at University School. “We are maturing from a kid band to a professional band.”

With the easy camaraderie of brothers, one starts a thought and another finishes it.

“No one’s serious in a kid’s band,” said Sheldon, 12, a seventh-grader at University School. “They are just messing around.”

The Hollywood brothers used to practice frequently, but now they know each other well enough to read each other’s signals onstage. They use cues to create a strong set for their rock ‘n’ roll blues band. In concert, they don’t use a pre-determined list of songs; Cameron assesses the audience and decides what songs to perform, with input from Sheldon and Tyson.

The sound of the band is old school rock ‘n’ roll with a strong smattering of blues thrown in for good measure. The boys started playing their style of music after their parents, Tammy Osceola and Terry Tartsah Sr., suggested it. They also write and perform original songs in the same style.

“The best part of being in the band is showing everyone our talent,” Sheldon said.

Each boy was influenced by different musicians, and they admire players of their own instruments.

During their gig at the Hard Rock Cafe on Aug. 16, the boys played to a packed house, which included family, friends and regular cafe patrons.

As soon as the strains of Cameron’s lead guitar were heard outside the restaurant, a line formed at the door.

“The manager of the cafe saw them play at the Burgers & Beer Fest and asked them to play at the cafe,” said Tartsah, the band’s father, manager and roadie.

The band plays often on the rez, but the Osceola brothers have also performed at events locally and around the country. They have opened for the band Candlebox at Hard Rock Live and played at the Burgie Awards & Food Festival in Fort Lauderdale, Virginia Key Grassroots Festival, Florida Day of the Dead Celebration in Fort Lauderdale, conferences at the Hard Rock Hotel & Casino Hollywood and a Native American conference in San Antonio, Texas.

They hope to play at the Gathering of Nations PowWow in New Mexico and the Choctaw Indian Fair in Mississippi next year.

“Sharing music and connecting with others through music is spiritual to me,” Cameron said. “No matter what language you speak, it’s one way people connect. Music is a language of its own.”