Skip to content
You are here
Home > Sports > From playpen to cattle pen: Youth compete in rodeo 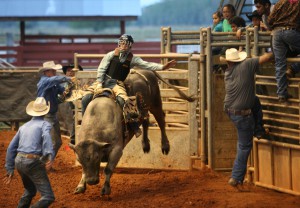 BIG CYPRESS — Dyami Nelson, 13, began rodeo sports only two years ago but competes like he was born in the saddle.

During the March 22 Eastern Indian Rodeo Association (EIRA) kids’ non-sanctioned rodeo at the 17th annual Junior Cypress Cattle Drive & Rodeo, Nelson, of Hollywood, held tight to the bull rope on the back of a massive bucking steer and took first place in two steer riding events.

Like an old hand, he then helped strap younger riders into safety gear, settled rough stock in chutes and assisted adult organizers with any need.

Blevins Jumper took first place in steer undecorating, and Andre Jumper won first place for breakaway roping. Barrel race first-place winners were: Diamond Osceola in the 4-to-8 age group; Budah Jumper for ages 9-to-12; and Kalgary Johns for ages 13-to-17.

“It’s an adrenalin rush,” Nelson said while wiping sweat and clay from his face.

It’s also in the blood for most of the 100 Tribal youth registered in the EIRA non-sanctioned events program, said the program director Moses Jumper Jr.

“Rodeo is a top traditional sport for the Seminole. We were about horses and cattle for hundreds of years, long before the Indians of the plains and back when the Spaniards were here,” said Jumper, a fourth-generation cattleman and cowboy who passed the culture to his sons, grandchildren and countless Tribal children.

Most people are surprised to learn that rodeo was the first money-making business for the Tribe, not pow-wows, Tribal fairs or alligator wrestling shows, Jumper said. He likes to see kids as young as 2 begin to get comfortable on the back of a horse.

“They can start at 3 years old with sheep events and move up from there,” he said. “They can barrel race at 4 and by the time they are 17, they can be in roping events and bull riding.”

Loosely organized training is available on Brighton and Big Cypress Reservations, Jumper said, provided by parents and grandparents willing to pass down the lifestyle and sport. His grandchildren, nieces, nephews and their friends are welcome to practice on his Big Cypress ranch any day, any time.

Most Hollywood Reservation youth train during scheduled times up to five days a week at Linda Sluder’s Spun Gold Equestrian Center in Davie.

“They have to practice like any team sport but they also learn horsemanship, how to care for the animal, how to compete and how to win,” Sluder said.

Jo “Boogie” Jumper, a rodeo pro who serves as secretary for the EIRA, said training is a must and competing at the non-sanctioned events is “huge” – especially this year.

“We use the kids’ events as feeders to the adult rodeo,” she said. “We’ve already witnessed how that happens with people like (rodeo pros) Jacoby Johns and Justin Gopher. Both came up from the Seminole programs.”

Adam Turtle, a former director whose children are now in the youth program, said he made it as an adult competitor to the Indian National Finals Rodeo (INFR) finals 10 times.

“But this is where it starts,” Turtle said, watching the barrel races at the Junior Cypress Rodeo Arena. “Kids need to come out and have fun. It builds pride for who they are and heart for what they can achieve.”

For the first time, Seminole children will have a chance to participate at the INFR championship in Las Vegas in November 2013.

But first, youth competitors must compete for spots on INFR tours. The top 10 from the tours will then go on to the INFR championship.