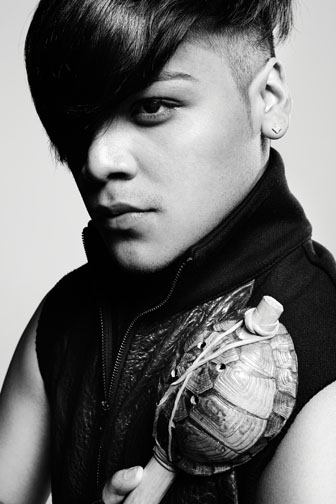 Pop and R&B singer-songwriter Spencer Battiest recently made history as the first Native American artist signed to Hard Rock Records, a label owned by Hard Rock International. His new single, “Love of My Life,” debuted May 9 and is available on iTunes and Amazon.com.

“This is a very emotional song and it means so much to me as an artist. It’s the first one I wrote on my own,” said Battiest, who grew up on Hollywood Reservation and lives in Los Angeles. “[Signing with Hard Rock Records] is like going home; it’s a perfect fit for me.”

Hard Rock Records launched in 2012 to find, develop and promote new artists. The label produces records, prints copies, makes them available on iTunes and Amazon.com, and connects artists with management companies and booking agents. At the end of the one-year contract, artists retain ownership of their recordings and gain tools to move forward in their careers.

“Spencer has been on the radar – he’s part of the Hard Rock family,” said James Buell, co-head of artists and repertoire at Hard Rock Records. “Hard Rock is about every genre of music; working with someone like Spencer cements that. He is talented, and his drive and determination will set him apart.”

Other accolades for Battiest include writing and producing “The Storm” with brother Zac “Doc” Battiest. The single won Best Music Video at the American Indian Film Festival in 2011. As a teenager he opened for Aerosmith, Sting, the Police and his favorite artist, Stevie Wonder, in front of an audience of more than 100,000 at Hard Rock Calling in London.

Battiest’s own life experiences, as well as those around him, inspired his latest single.

“I grew up listening to elders; my favorite thing to do is listen to other people’s stories,” he said. “I listened and created this song. If people can relate to it, then I feel like I did my job.”

Battiest also created a video for “Love of My Life” using a largely Native American crew and cast. Steven Paul Judd, of the Kiawa and Choctaw Tribes who also directed “The Storm,” was on board for this video. They filmed on the Hollywood Walk of Fame and other Los Angeles locations.

Shayna Jackson, Dakota/Cree, was the lead actress, Bulgarian dancer Valentino Vladimirov was the lead actor and Pamela Peters, Navajo, produced the video. The music was recorded and produced in Zac’s studio on the Hollywood Reservation by Los Angeles music producer B. Howard.

“Whether or not I become a huge success, my goal is to elevate Native Americans and encourage my people to go after their dreams in whatever field they choose, to do it to the best of their ability and at the highest level they can,” Battiest said. “It gives me great joy and pride to say it was an all-Native American production.”

Battiest always carries his journal, in which he writes random sentences, paragraphs and ideas that ultimately wind up as lyrics put to music. He finds inspiration from his ancestors and displays Tribal colors during performances.

“I never forget about how they sacrificed for us so we can be where we are today,” he said. “That’s what led us to write “The Storm;” I can’t help but feel the presence of my people who came before me. It reminds me to be humble and never forget where I came from.”

“A lot of people my age don’t know about them,” said Battiest, 23. “I love the great American songbook and country music because that’s where the stories are told that grab at your heart. People are hungry for a real story when they listen to a record.”

Battiest said his family keeps him grounded and serves as his biggest supporters and critics.

“It all comes from a place of love,” he said. “You can’t buy that. They let me make my own decisions, which help me to grow as a man and as an artist. My career could be over tomorrow and I can come home to my family and they will just love me. That brings me the ultimate joy.”

Battiest hopes to inspire other Native Americans. He is also grateful for the support and encouragement from the Tribe, the Council and the Board.

“Music is a tough business and the leaders have been behind me my whole life,” he said. “That really drives me and pushes me to make them proud. The Tribe is my family, and I always try to make my family proud.”