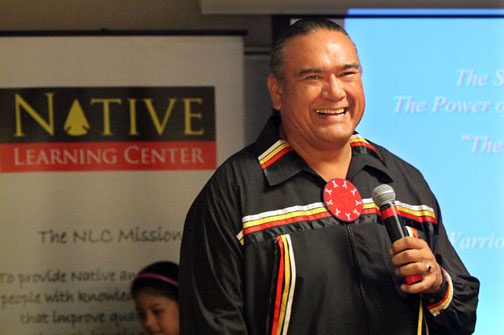 Actor and former NFL player Jim Warne made careers of playing in front of cameras, but when the Oglala Lakota member stood in the Seminole spotlight recently, he revealed another passion.

“It’s about enlightenment. Most people have no clue about Native American history or what is happening today,” said Warne, founder and president of Warrior Society Development. “They are ignorant by design.”

Historically, from the European invasion in 1492 up to today’s Indian gaming, facts have been twisted or ignored to suit the non-Native agenda, he said.

From April 29 to May 1 in Hollywood, Big Cypress and Brighton, Warne exposed forgotten, misrepresented or hidden truths to help ignite Native American progress throughout Indian Country.

“Our youth tend to get lost in where we come from. If it’s not being taught in school or at home, it needs to be taught here. We must let them know why and how they should move us to the future,” said NLC executive director Georgette Palmer Smith, of the Kiowa Tribe in Oklahoma.

The movement is rooted in a prophesy made by Lakota Medicine Man Black Elk after the 1890 massacre at Wounded Knee, S.D. that left 300 Lakota men, women and children at the hands of the U.S. Army. Black Elk said it would take seven generations to heal the broken circle of life caused by constant Indian oppression that reached a devastating climax with the massacre.

Smith said youth at Warne’s presentation in Hollywood paid close attention when Native decimation was compared to the genocide of the Holocaust.

“The grandchildren (of Seminole Tribe founders) perked up when they heard about our genocide. Now, when they visit Washington, D.C. and see the (United States Holocaust Memorial Museum) they will know that it happened to our people, too,” Smith said.

Historians disagree about how many Natives lived in North America before Christopher Columbus arrived, but estimates – from 1.5 million to 112 million – average about 37 million. In any case, only 237,000 American Indians were counted in the 1900 U.S. Census.

Under the heading “Ethnic Cleansing,” Warne showed a Sept. 24, 1863 newspaper clipping from The Daily Republican in Minnesota that advertised “$200 for every red-skin sent to Purgatory. This sum is more than the dead bodies of all the Indians east of the Red River are worth.”

“It is shocking to some people. Some wonder, ‘How could we not know this?’” Warne said. “It’s my responsibility to never forget and to teach everyone.”

In Big Cypress, about 25 people attended the presentation. Many were stunned when Warne said that Native Americans are the only population in the United States guaranteed federal health care but the last on the list when it comes to distribution – which falls below convicted criminals in prisons.

“How is it that lawbreakers – who include pedophiles, thieves and drug dealers – get more health care allowance than we do? We’re the only people with the legal right to health care but what we get is health care that ensures the highest diabetes rates and the lowest life expectancy,” Warne said.

In fact, a 2013 Bureau of Prisons report blamed skyrocketing health care costs for catapulting annual prisoner medical allocations to nearly $6,000 per inmate in 2012. Meanwhile, in a 2012 Indian Health Service National Tribal Budget Formulation report, only $2,896 was provided for Native Americans per capita during the same year.

“We need to have more teaching. I’ve been to school, but I never heard about most of this before,” said Tigertail, who attended public schools in Clewiston.

Warne, a nationally recognized motivational speaker armed with college degrees that include a master’s in post-secondary education, takes every chance to educate. The most frequent lesson he doles out is Indian 101 – often unexpectedly.

He obliterates myths when non-Natives spout common misconceptions, explaining to them that Indians do pay federal taxes; Tribal profits are not distributed to every Native in Indian Country; all Natives do not speak the same language; and none of the languages are called “Indian” or spoken in broken diction, like Tonto in The Lone Ranger.

In 2011, while in Washington, D.C. to speak before a Senate committee about the use of Indians as sports mascots, Warne met a congressman in the hallway who commented that all Native Americans are getting rich off casinos. Warne asked the congressman if he received money from Donald Trump lately, since Trump is white.

“The majority of casinos (in Indian Country) are so tiny that when you know what Tribes are doing well, you know the answer is hardly any. People are kept ignorant by design,” said Warne, who believes 30 percent of Congress has no care for Native interests because federally recognized Tribes exist in only 35 states.

Warne said much of the ignorance is perpetuated in American schools where the history, culture and philosophies of the country’s first nation of diverse peoples are ignored.

For decades following the mass relocations, the same disregard occurred in reservation schools.  Native children ripped from families were forced into boarding schools and told to forget who they were. Thousands were punished brutally, even to death, for uttering their language. Their hair was shorn and their clothing was replaced with English school uniforms.

“We need history written by our people, and we, all elders in training, have to teach it. Only through education can we counter the ignorance,” Warne said.

“Hopefully, what people learn today will carry through to stronger, safer and sustainable communities tomorrow,” she said.