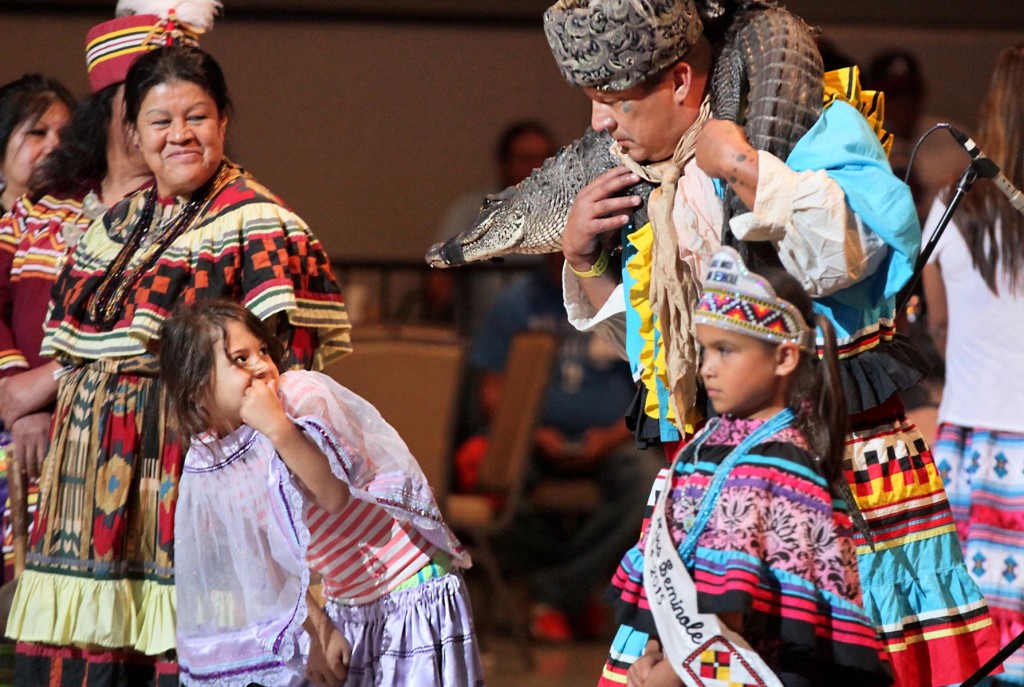 HOLLYWOOD — Elders, veterans, school children and an alligator slung around Billy Walker’s shoulders opened festivities May 9 with a grand entry that marked more than a century of Seminole perseverance and a decade of serious prosperity.

“It was beyond my expectations that we would be as successful as we are today,” said Chairman James E. Billie at the start of the fourth annual Seminole Okalee Indian Village Pow-Wow. “Now we are on the map all around the world.”

After the grand entry but before pow-wow competitions began, five local charities were awarded $10,000 annually for the next 10 years. The half-million dollar donation was made to the JDRF – South Florida Chapter diabetes research organization, Ann Storck Center, Big Brothers Big Sisters of Broward County, Make-A-Wish Southern Florida and Habitat for Humanity of Broward.

“We’re seeing the Native spirit of generosity and love. They live it above and beyond,” said Roz Perlmutter, second vice president of Ann Storck Center, a residential facility in Fort Lauderdale for children and adults with severe and multiple disabilities.

Ann Storck’s CEO Charlotte Mather-Taylor said the Tribe has always been kind to the center. In April, Tribal members erected a chickee that serves as an outdoor classroom and meeting place. Annually, the Hard Rock sponsors the center’s Celebrity Chefs fundraiser.

Hard Rock International Chairman Jim Allen was honored to award the donations but said he deserves no credit.

“Because I came from a challenged background, it’s always rewarding to have an opportunity to help. But it’s never about me. It’s always about the Tribe and Tribal members,” Allen said.

Chairman Billie gave the “hero” nod to Mitchell Cypress who was the Chairman in 2002 when the deal to build the Hard Rock was struck.

“People thought he was crazy to trust a bunch of white folk. It sure wasn’t so crazy now that we are all happy and fat,” Chairman Billie said.

Allen has led Seminole gaming operations since 2001. He was at the helm in May 2004 when the hotel and casino opened, and he was there in 2006 when the Tribe struck a deal to purchase Hard Rock International.

The numbers in a nutshell: In the past 10 years, Seminole Hard Rock Hotel & Casino Hollywood has contributed nearly $16 million in sponsorships and donations locally; regionally, the company has a direct annual economic impact of $276 million including $138 million for payments to employees and another $138 million for in-state purchases of goods and services. Roughly 3,750 employees work for the hotel and casino complex.

Naysayers noted the inner city location a distance from the beach; the economy of the time which dashed plans for 750 rooms down to 500 rooms; record rains that consistently delayed construction; nonexistent street infrastructure; and no slot machines.

Annually, the hotel operates at 98 percent capacity. About 15,000 people come through on weekdays and about 40,000 show up on weekends to enjoy the hotel, casino, big-name concerts, fine restaurants, upscale shopping and Seminole cultural events.

Most important: The money stays at home through a compact deal with the state and dividends sharing with Tribal members.

According to a recent press release, the total annual economic impact to the community at large is $516 million and 6,600 jobs.

The pow-wow event offered visitors a glimpse of Seminole culture with alligator wrestling and snake shows at the Okalee amphitheater, patchwork and bead jewelry in a vendor midway, and authentic foods cooked to order at a cluster of outdoor chickees.

People from many Tribes including the Kiowa, Comanche, Lakota, Oneida and Cherokee participated in dance and drum contests.

Celebrities who have appeared at Hard Rock Live also popped in via a video broadcast before the event. International stars including Gloria Estefan, Jerry Seinfeld, Jason Taylor and Lady Antebellum offered good wishes for future anniversaries.

Allen said plans are in the works for improvements and expansions that will likely include a new hotel entrance, a lobby bar and the creation of several super suites.

“Now I know what they mean when they say, ‘Time flies when you’re having fun,’” Councilman Osceola said.