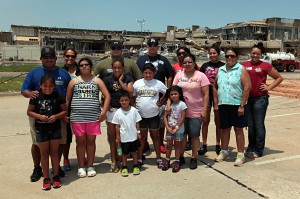 MOORE, Okla. — The Jim Thorpe games went off without a hitch for most competitors; except for a few living close to the games, the hardest part was getting there. On May 20 an EF5 tornado, with winds of 210 mph, devastated the city of Moore just south of Oklahoma City and with it, the dreams of a few athletes who were scheduled to compete.

“Three of our players lost everything,” said Annetta Abbott, director of the Jim Thorpe Games. “We allowed teams to replace kids who couldn’t get here. The Sac and Fox team let those kids play on their teams so they could still compete. The Seminoles have helped out, others too. There has been a great show of support.”

Before the tornado, the population of Moore was about 55,000. It destroyed entire neighborhoods, leaving many people with no home or possessions. Seminole Police Department Officer Jarret Romanello, an Iraq war veteran, wanted to help the victims and give Seminole kids a chance to volunteer after they completed in their games. Romanello contacted the Church of the Nazarene in Moore to offer the services of Tribal members and employees. Officer Venesia Elliott and Brighton Fire Rescue Capt. Juaquin Silvas helped organize the effort with Brian Dodd, Hollywood Recreation site manager.

“We wanted our kids to see firsthand and up close how lucky we are and how devastated these people are,” Dodd said. “It was a real eye opener.”

Josh Jumper’s 14U softball team finished their competition in second place and used their free time to help out.

“I thought it would be great for the kids to give a helping hand,” said Jumper, who coaches the team. “Anything we can do to help, we’ll do it.”

The team, along with siblings and parents, descended on the church eager to get busy. Some kids packed up boxes of food and supplies; others helped serve free meals to hungry people.

For the few hours spent at the church, the kids worked hard.

People from all over the country were drawn to Moore to give assistance; one group from a Nazarene church in Maine spent a week working at the church. The Mainers took the Seminole kids under their wings and gave them plenty to do, as there was a huge amount of donations to organize and prepare for distribution. The church turned every room except the sanctuary into storage space for food, toiletries, clothing, baby items and more. In these rooms, boxes were filled with enough food and supplies to last people about a week.

“It feels good to know we can help someone out with the things they need,” said Chastity Harmon, 14, of Brighton. “Me and my mom talked about it; it looks not real, like in a movie. But knowing it’s real makes you think of who was there and how it happened. I can’t imagine it happening in Brighton.”

A few girls manned the food line with other volunteers.

“It makes me feel good to help out,” said Canaan Jumper, 9, of Big Cypress. “A lot of people lost their homes.”

“It makes me feel sad,” added Ava Nunez, 9, of Immokalee.

After a day of volunteering, the team and their entourage toured the devastation in a neighborhood adjacent to the severely damaged Moore Medical Center. Before the tornado, these were typical suburban streets with tidy homes, all in a row. Now, those homes were gone, replaced by piles of debris and an occasional intact fireplace and chimney jutting up out of the rubble.

“This wasn’t our primary mission, but after the kids were done competing we wanted to find something positive for them to do,” Romanello said. “These kids didn’t have to be here; it shows their true character.”