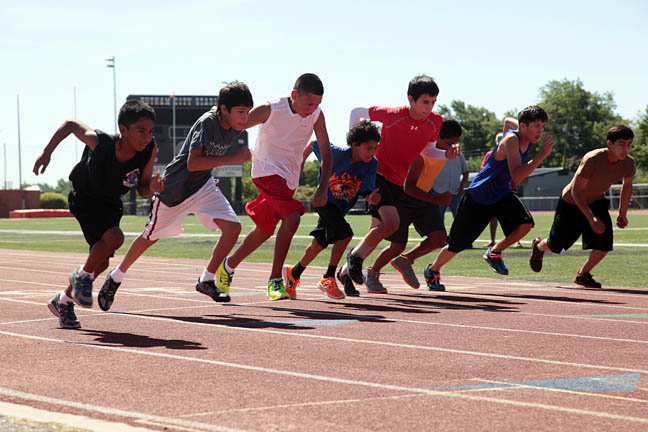 OKLAHOMA CITY — Jim Thorpe was many things: a gold-medal Olympic athlete; professional basketball, baseball and football player; a boxer and a golfer; “Athlete of the Century,” according to ABC’s “Wide World of Sports;” and “the greatest athlete in the world,” according to Sweden’s King Gustav V, who made the declaration at the 1912 Olympics in Stockholm. To the 1,400 athletes who competed in the second consecutive Jim Thorpe Games, he was an inspiration.

Members of nearly 70 Tribes nationwide competed in the games, held in Oklahoma City from June 9-15. The Seminole Tribe sent 100 athletes to compete in basketball, softball, golf, track and field and wrestling.

“Jim Thorpe raised the bar so high we have something to aspire to,” said Gary “Litefoot” Davis, emcee of the opening ceremony. “Make sure what you do is to aspire to be better than you were yesterday. Jim Thorpe embodies the possibilities out there for Native American athletes; it’s possible to achieve that same kind of success.”

Annetta Abbott and Kim Snell came up with the idea for the games to celebrate the 100th anniversary of the Sweden Olympic Games, where Thorpe won the decathlon and pentathlon in 1912. To this day, he is the only man to win both events.

“Thorpe did it all in shoes that didn’t fit,” said Abbott, executive director of the Jim Thorpe Games. “His shoes were stolen at the Olympics, so he got one from the garbage can and one was given to him by another athlete. During pre-workouts before the Olympics, he ran with a group he would compete against. They saw what they were up against.”

The mission of the games is to provide a sports competition so athletes can meet and compete with peers from other Tribes. Athletes participating in the games ranged in age from 4 years old in martial arts to 78 years old in golf. Most ranged between the ages of 12 and 18; the games were designed primarily for youth.

“We want to foster a healthy lifestyle and build kids’ self-esteem,” Abbott said.

Thorpe’s son, Bill Thorpe, grew up participating in sports and loves athletics still. The active 85-year-old spent the week watching the competition and reveling in his father’s legacy.

“It’s wonderful to come watch these young Native American kids; they are enjoying themselves and that’s what the games are about,” said Thorpe, of the Sac and Fox Tribe.

“Dad wanted a junior Olympics for Native Americans; he would love this. He loved sports, period. You name it, he enjoyed it. He excelled like no other man; it all came easy to him.”

Thorpe remembers his father as happy-go-lucky, someone who enjoyed life. They hunted and fished together, but the memories of sitting under a big tree listening to the coon dogs run is one of his favorites.

During the softball competition, Thorpe was bombarded by kids and parents who recognized him and wanted to take a photo together. A jovial man, he happily complied and relished meeting each athlete.

Athletes from the Pine Ridge School in S.D. – whose mascot name is the Thorpes – are inspired by his legend every day. They raised money to attend the games and drove 14 hours to Oklahoma City.

“Jim Thorpe is a legend to us,” said Yvonne DeCory, youth development specialist with the school. “The school was renamed 60 years ago because his values – honor, fortitude, bravery, never give up – are ours. The kids all hold him in high esteem.”

The Seminole Tribe was well represented in the basketball competitions with teams in the boys’ 14U, 16U, 19U and the girls’ 16U and 19U. Some kids played on intertribal teams, others on all Seminole teams. The 19U boys’ intertribal team J.U.S. Nation (Just Us Seminoles) has been playing together for five years. They met while competing in tournaments in Indian Country; neither Just Us nor the Seminoles had enough members to have a deep bench so the teams merged.

“They’ve developed friendships over the years,” said Andrew Jordan Bowers, J.U.S. Nation coach. “We have younger kids who are getting ready to join the team.”

Although the team won the NAYO tournament in Seneca, N.Y. in March, they came in third place in these games. Bowers said two starters couldn’t make it to Oklahoma.

The 14U basketball team N3 placed second in the games.

“I can relate to Jim Thorpe,” said Darla Cypress, 16, of Big Cypress, who played on Ball Hawgs. “I’m chasing the dream and trying to get off the rez. If I didn’t have sports, I’d probably be into other things I shouldn’t do. It gives me motivation to be better. It’s nice to see what other Tribes can do; everyone’s chasing something. We have more in common than most races.”

Twenty-six boys in elementary through high school, weighing 60 to 285 pounds, competed in wrestling. Although Drayton Billie has been wrestling for a few years, he was never in a competition before the games. He didn’t win his match.

“It was my first taste of competition,” said Billie, who will be a ninth-grader at Okeechobee High School in the fall. “It makes me want to try harder.”

Girls’ 18U and 14U softball teams took to the fields in 100-degree heat but played enthusiastically. The 14U team won second place.

“It’s exciting,” said Erena Billie, 18, of Brighton. “I like to play softball and travel to play other Indians from all over.”

Rhett Tiger and Arek Jumper competed in track and field events. Tiger ran in the 800 and 1,600 meter race; Jumper competed in the 800. Tiger, who is on the University School’s team, has been training in Hollywood with Recreation coordinator Lavel Walker since February. Ever the coach, Walker hollered encouragement to Tiger as he ran around the track. He won the 800 and placed second in the 1,600.

“It’s different here; you are facing different people and you don’t know how they run,” said Tiger, 14. “It’s not Florida weather and I could have gone harder if I ate breakfast. But it feels good to represent my Tribe in running.”

Seven Tribal kids and one adult competed in golf. Although the course was beautiful, it had a feature Florida golf courses don’t usually have – hills. Golfers had to drive the balls not only down the fairway but also up and down hills. That, plus the dry heat, made for challenging days on the links.