Skip to content
You are here
Home > Community > So far, so good in battle against mycotoxins

As one of Florida’s top cow/calf operations, the Seminole cattle program relies on consistently high pregnancy and birth rates to thrive. So when those rates fell in 2014, Natural Resource Director Alex Johns decided to investigate.

2014 was a mild winter but the cows were in worse body condition than the previous year, when there was less grass. In theory, with all the grass available to eat, the cows should have looked much better. Body condition is the best indicator of a cow’s ability to be bred.

“I haven’t been alive long enough to see climate change in the past,” Johns said. “We had about five or six years of mild winters and had less frost and more grass so the cows should have been in better shape. I think this issue has always been around, but we finally put a finger on it.”

Aaron Stam, Florida cooperative extension agent and federally recognized tribal extension agent, worked with Johns to identify the problem and find a solution. They knew something was going on in the environment and were determined to find the problem.

“We saw some reproductive performance issues,” Stam said. “Typical pregnancy loss is about five to seven percent from bred cows. We found pastures with 14 percent loss, which was significant.”

Clearly, something was wrong so Stam started testing for mineral and other deficiencies; none were found. He did some research and started to look for mycotoxins, a type of fungus, which had never been documented in Florida pastures before. Five of the most common grasses in Tribal pastures were tested. The mycotoxin Zearalenone (ZEN) was found in the common Bermuda grass.

Stam took 157 samples from the pastures used for the field trial and 78.6 percent came back positive. He later increased the testing to all Tribal pastures and the findings were similar.

“Bermuda grass is a low, matt type grass,” Stam said. “Most of the other species grow tall. I thought if I were a fungus, this is where I would be.”

The grass was contaminated with the mycotoxin at a very high level. Making matters worse, mycotoxins are given off when the fungus is under stress. Cool, wet winters allow the fungus to thrive; but cows nibbling on the grass, walking on it, frost, heat and other factors stress the fungus.

ZEN causes an excess of estrogen in the cows and attaches to the animals’ estrogen receptors, which prevents them from getting pregnant or carrying a fetus to term. Virgin heifers even displayed signs of pregnancy.

Once the problem was identified, Johns and Stam met with representatives from Biomin, an animal nutrition and health company that develops and produces feed additives to combat mycotoxin risk. One of its products, Biofix Plus Pro, has been added to the molasses and mineral supplement the cows eat since 2015.

“We are on the cutting edge of implementing safeguards against mycotoxins,” Stam said. “We’ve seen dramatic results after two years of field trials.”

Biofix has been used in dairy cows, who are fed a specific amount of food and don’t go into a pasture to graze. Until the Tribe began using it, the product had not been used in beef cattle, which graze continuously and eat the molasses at will. 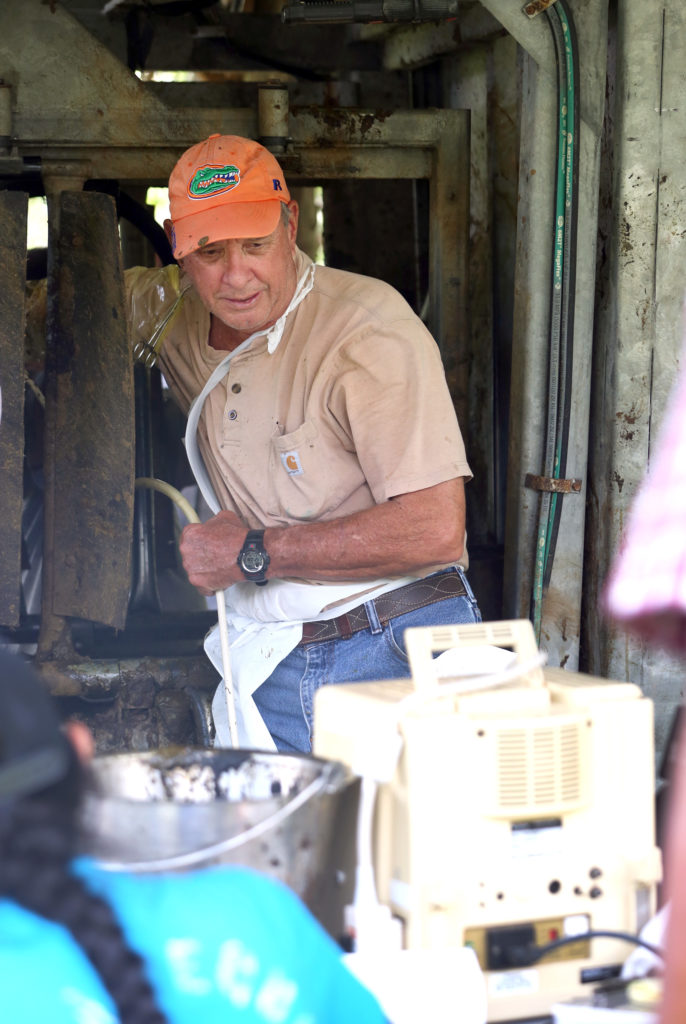 “Alex is a scientist of the game,” Stam said. “He asked if I ever thought about the social dynamic of feeding. He proved to me that his knowledge is second to none.”

The result of the research has not been well received by everyone in the cattle industry. When Stam started sampling the grass, he didn’t know what he would find. When the first sample came back positive with ZEN, he believed he found the problem.

“New science is tough for people, but I say pay attention,” Stam said. “There are a lot of really good cowmen who have never heard of it. There is resistance to new things, that’s just human nature. If someone tells me I’m doing my job wrong, I’m going to fight. So I’m not surprised at the resistance to it. As the data comes out, people should begin to open up to it.”

After two years on Biofix, the pregnancy rate in the test herd increased by 21 percent, animals were 28.7 pounds heavier, bred up at 10 percent better and had a half point better body condition score. Every Seminole rancher now has access to Biofix in their molasses supplement.

Johns and Stam attend cattle owner meetings to communicate their findings and data about the use of Biofix.

“Owners know we are trying to address the issue and are providing a solution to them,” Johns said. “If they use the product, they get the solution. Those on the program are seeing the benefit, the ones that aren’t are suffering.”

The majority of Tribal cattle owners are participating in the program. Stam knows there are some naysayers, but he looks at the use of Biofix as an insurance policy.

“You are mitigating the risk of mycotoxins,” he said. “Some years may be worse than others and we feel there is some seasonality to it. Ultimately, it is up to the cattle owners. My job is to keep the data coming in and interpret it for the owners.”

Stam estimates the cost to about $20 to $30 per head per year and he believes with heavier calves and 10 percent more of them, it is a worthwhile investment. The return on investment can be significant per herd.

The process of getting the results takes two years; the cows are fed, impregnated, give birth and the calves are counted and weighed.

“We are already seeing a higher conception rate for those in the program,” Johns said. “We expect to have more heavier weaned calves a year from now.”

Other ranchers in the state have reached out to Johns for information on how the Tribe is dealing with the issue. He gladly shares it with them.

“Any time you do research, you wind up with more questions than answers,” Johns said. “Every day we learn more about issues affecting cattle in Florida. You aren’t doing your job if you aren’t doing the research to find answers to the problems you may have.”
Stam shared the details and results of the field trial at the Academy of Veterinary Consultants conference in Denver in August.

“I feel like I’m a good source of information now,” Stam said. “But I gave them a Seminole history lesson before I spoke about the science. I told them about the Seminole people and where cattle in this country came from, the location and environmental challenges faced in the Big Cypress swamp, one of the hardest places to raise cattle in the world, and in hot, humid Brighton. The Tribe were the first cowboys in this country and I thought it was pretty important information to share.”

Johns has great expectations for the owners in the program.

“In general it will increase conception, have more live calves, more weight sold and more money in their pockets,” he said.