PLANTATION — After missing her junior season with an injury, Skyla Osceola made sure her senior year featured a deep run in the postseason.

In February, Osceola led Heritage to district and regional titles before the Patriots were ousted in a state semifinal.

In both championship games, Osceola, a point guard, led the Patriots in scoring. She netted 28 points against Archbishop McCarthy as American Heritage won the Class 6A-District 16 title. Two weeks later, she poured in 22 points in her final home game as the Patriots held off Leesburg to win the 6A-Region 4 championship.

The victory against Leesburg earned Heritage, whose squad features three Seminoles (Osceola, Tiana Stubbs and December Stubbs), a berth in the Final Four, something only one other Heritage team (2010) had accomplished.

“It was really important to me,” Osceola said after the Leesburg game. “I never got the opportunity to go. Ever since I’ve been at American Heritage, we’ve always got knocked out by Dillard.”

Playing in her final home game, Osceola helped seal the regional title by calmly making 5-of-6 free throws in the final minute. Osceola, who signed with nearby Nova Southeastern University, made three 3-pointers, but it was her hard-fought layup through defenders with 3:33 left in the game that regained the lead for the Patriots at 45-44 and they never trailed again.

The Patriots received 14 points from Taylor Smith and 10 points from Femi Funeus, including six in the final quarter which saw Leesburg battle back to take brief leads after trailing most of the game.

“I knew we could do it,” Osceola said. “We have the chemistry together. I believe in these girls and I know they believe in me and they all have faith in me. I trust them. I wouldn’t want any other team to do it with.”

After American Heritage picked up its fifth team foul before the first quarter was five minutes old, Tiana Stubbs entered the game and made an immediate impact. She followed on the heels of a 3-pointer from Osceola by sinking a shot from beyond the arc that gave the Patriots a 13-6 lead.

“I can’t play nervous, I can’t play scared because it’s not going to help us,” Stubbs said.

Stubbs said Osceola’s play this season has been inspirational.

“Last year she tore her ACL so she couldn’t even play at all,” Stubbs said. “This year, her coming back and us making it to states, it’s the best. She inspires every single one of us to get better every day.”

Tiana’s sister December, a guard, saw a few minutes of action off the bench in the second quarter. Osceola said the sisters were key additions to the team.

“I’m really proud of these two girls. They got moved up from JV. They’re dedicated; they’re committed. I couldn’t be any more proud of them,” Osceola said.

In the district championship, Osceola scored 12 points in the fourth quarter to help American Heritage pull away from Archbishop McCarthy, 63-54, Feb. 3 at Coconut Creek High School. Osceola’s 28 points included 17 in the second half after the teams were knotted 24-24 at halftime.
Nursing a 38-36 lead after three quarters, American Heritage surged to victory thanks in part to Osceola’s 8-of-9 performance from the foul line in the final quarter. American Heritage also received double-digit point production from Funeus and Smith.

American Heritage’s season concluded with a loss to powerhouse Jacksonville-Ribault in a state semifinal Feb. 23 at the Lakeland Center.  The Patriots finished with a 28-3 record and plenty of memories.

“This season was definitely one to remember,” Osceola said. 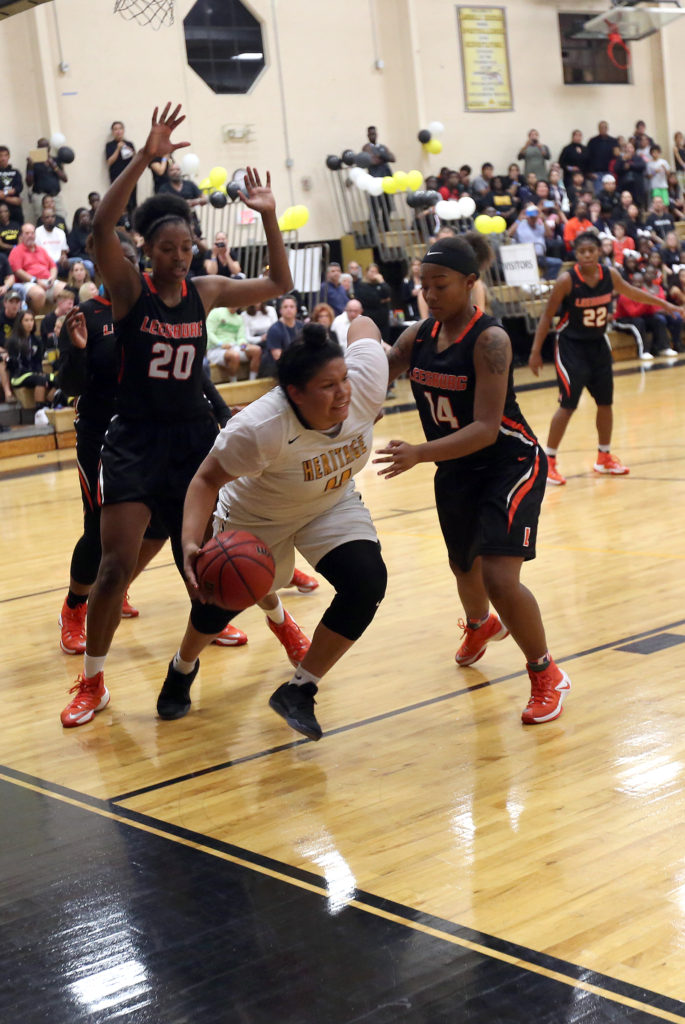