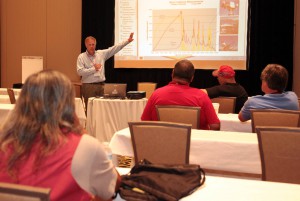 HOLLYWOOD — The theme of the Native Learning Center’s (NLC) fifth annual summer conference – “Strengthening Tribal Communities into the Future” – was compelling enough to attract 162 people from 65 Tribes around the country to the conference, held at the  Hard Rock Hotel & Casino Hollywood from June 4-6.

“Education has helped us survive as a people,” Big Cypress Board Rep. Joe Frank said. “Our Tribe pushes for it and believes in it. The NLC extends education to all Tribes; education is a cornerstone.”

Participants attended courses as varied as the Tribes they represented. Subjects included Financing Renewable Energy in Indian Country; The Influence of Tribal Language on Culture and Identity; Sustainable Gardens: Remembering and Honoring our Traditions; Strengthening Native Families through the Use of Traditional Concepts of the Medicine Wheel and Moccasin; Understanding the Federal Tribal Relationship; and Emergency Preparedness 2.0, Beyond Weather Disasters. And that was just the first day.

“We have hit a new high level of everything,” said Georgette Smith, NLC director. “We have well over 150 people here now; our first year we had about 25 to 50. The level of the subject matter taught by these experts amazes me because they are so well known in Indian Country, and the knowledge they bring here is phenomenal. The attendees are truly engaged in the courses.”

Founded in 2008 as a department of the Tribe, NLC is funded by the U.S. Department of Housing and Urban Development. The center’s mission is to provide knowledge, training and skills to all Native Americans which will improve their quality of life, at no cost to them. Areas of focus include housing strategies, celebrating culture and language, financial wellness, grants education and Tribal government.

To put together the curriculum for the conference, the NLC sent out requests for proposals to their sizable database of qualified instructors, who could submit up to six course options that follow the conference’s theme.

“We had a tough selection process,” said Nicole Harker, NLC administrative services program director. “Every component is well thought out by the NLC team. The classes are very interactive. I think this has been a success; people are networking and we have heard nothing but great things from them.”

Renewable energy is a hot topic in Indian Country, and Eugene Wilkie, director of project development at TAWA Power and a member of the Turtle Mountain Band of Chippewa Indians, is an expert in the field with more than 20 years of experience. He talked about solar, wind, hydroelectric and other renewable options and how to fund them.

The Department of Energy has money available for infrastructure and banks are eager to loan money because it is guaranteed by the federal government through the FDIC. The challenge is knowing how to properly apply for funding and what obstacles may arise.

“Tribes can form their own utility companies,” Wilkie said. “This is your nation; you can sell power to yourself first.”

The amount of jobs that can be created in the renewable sector depends on the type of energy. Solar energy has become very affordable, down from more than $5 to only 67 cents per watt, but once the system is in place, no jobs are created.

Manufacturing is the biggest opportunity for renewable energy jobs in Indian Country today, Wilkie said. China used to make the components for solar energy but ceased when high tariffs were enacted.

“This could give Tribes and youth an opportunity to rise up and work in the industry while learning it on the job,” he said. “Corporations are looking for Indian land but it isn’t easy to find a Tribe who is going to be the workforce. This is a serious issue because this industry could give youth a sense of purpose and intellectual pride. They can make a nice living; the corporations will bring the education in so college isn’t a necessity.”

Cultural awareness is an important consideration for any reservation-based business. A course given by Ron Sheffield, of Organizational Sciences and Culture Inc. and a member of the Quechan of Fort Yuma Tribe, delved into the meaning of culture. He asked the participants to define what culture meant to them.

“It’s the sum total of who we have been, who we are now and who we will become,” said a member of the group.

“It’s the way of real people,” added another.

Describing culture depends on the people.

“Culture can be defined as how people see you,” Sheffield said. “If I wear my Indian clothes, I’m perceived a different way than when I wear my white guy suit.”

Attendees were pleased with the conference overall.

“It’s a real learning experience,” said Alta Branham, of the Mescalero Apache Tribe in New Mexico. “It’s always good to learn traditional things from other Tribes that you can take home to your own reservation. We have strong traditional values, too. We’re all the same but a lot of people are losing their traditions. I hope to learn ways to strengthen our community.”

Many people collected names, telephone numbers and email addresses so they could keep in touch and keep learning from one another. Sharon Taazah, of the Mescalero in New Mexico, wanted to get information on successful ways to bring culture back to Tribal youth. Seminole members also attended the conference.

“It’s been very informative and it reinforced things you kind of knew about tolerance,” said Mary Jene Koenes, of Big Cypress and a language teacher at Ahfachkee School, who participated in the Revitalizing Work and Tribal Culture Through Team Awareness course. “You know you can’t change anyone else, only yourself. I also learned about sustainable gardens and got some ideas to improve our garden at the school. A lot of other Tribes are just getting started in language and culture; to see we are way ahead of them and be able to exchange information with them was really great.”