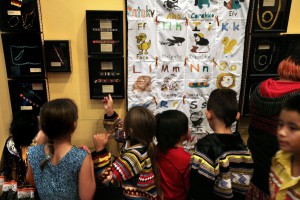 BIG CYPRESS — Rudy Juarez, 13, never imagined that a Seminole doll fashioned by his own hands would be considered museum quality.

But there it stood encased in glass at the Ah-Tah-Thi-Ki Museum and surrounded by 75 other Seminole-inspired crafts created by 35 fellow Pemayetv Emahakv Charter School students.

“I hope anyone who comes to the Museum sees the amount of hard work every piece took, and I hope they realize how lucky we (Seminoles) are to have our culture so alive today,” Juarez said.

Through summer, thousands of visitors and Tribal members who peruse the Museum located at the Big Cypress Reservation will get to view the students’ handiwork.

Janelle Robinson, the school’s cultural arts teacher, said the students toiled for seven months to create hundreds of pieces during daily art classes. The works chosen for exhibit are the cream of the crop.

“But traditional crafts are not just projects. They are symbols of how things were and how they have changed over the years,” Robinson said.

The kindergarten through eighth-grade children learned first how tradition requires the works to be constructed. The designs of the beadwork jewelry follow certain patterns; ric rac on patchwork is stitched in specific fashion; cypress wood is always used for authentic carving.

“But once they learn how to do it, they pick it up. Then we let them chose their colors and let them go at it,” Robinson said.

Friends Aubee Billie, who is in fourth grade, and third-grader Angelie Melton both have beaded works in the exhibit. Melton created a necklace and bracelet that was finely crafted in the tradition of her ancestors with red, yellow, white and black Seminole colors. Billie used beads to decorate a writing pen, though traditionally and correctly strung, in Miami Hurricanes football team colors.

Robinson said the show was the first for the 6-year-old school at the Ah-Tah-Thi-Ki  Museum. It also showcased the best works from some of the children who have been taking traditional arts classes all their school lives.

“Sometimes, like in any other classroom environment, it’s hard to get them going but they always appreciate it later,” Robinson said. “What makes it worthwhile is when they look up at me and say, ‘I get it.’”

In first grade, the children learn how to use a loom for beadwork. In second and third grade, they learn how to string basic chains and daisy chains. Fourth-graders learn peyote stitches, and fifth-graders graduate to creating intricate medallions.

Jade Braswell Osceola, the school’s history teacher, said the children are always doing two things at once: recreating the past with a modern twist.

“This art was created in the past to put food on the table . . . now, they are learning the techniques and moving it forward,” she said.

Museum curator John Moga praised the children’s designs during a reception held in their honor on May 20. He especially noted Juarez’s manifestation of an otherwise typical traditional doll.

“It’s visually dynamic. The expression on the face is joyful. The clothing flows outward. It’s a fluid piece – a static three-dimensional piece that moves. It is sculpture,” Moga said.

“When people from Germany, Europe and of all the world come here, they will see that the Tribe is alive and this is what the children are doing,” he said. “They are keeping the traditional art and the language strong.”

“We strive to have the community engaged in the Museum, and we always want the Tribal youth to know this place belongs to them,” Backhouse said. “With this exhibit, there is no doubt.”