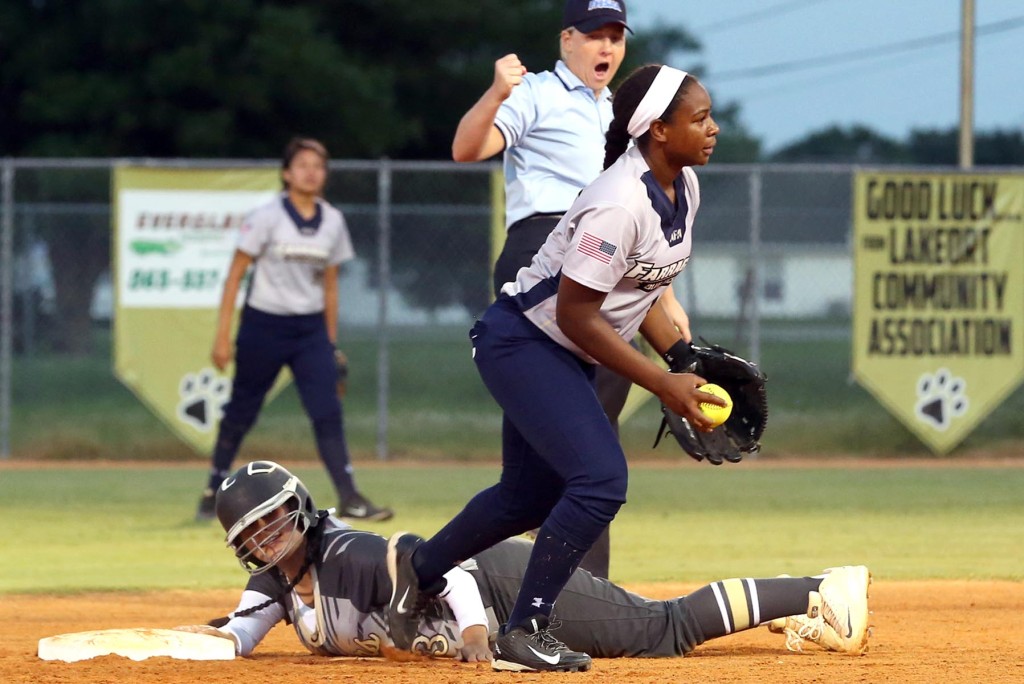 MOORE HAVEN — Regardless of the final score, Seminoles were guaranteed to be winners when Moore Haven hosted Admiral Farragut in the Class 3A softball regional final May 1.

With six Seminoles on Moore Haven and three on Admiral Farragut, the Tribe couldn’t lose.

“What a coincidence. They both play softball for different teams and then they meet up here at the end of the year in a do-or-die situation,” said Norman “Skeeter” Bowers, who was among dozens of Tribal members who watched Moore Haven edge Admiral Farragut, 1-0.

To a certain degree, Moore Haven coach Darryl Allen couldn’t lose either way. All nine Seminoles played for Allen when he was Pemayetv Emahakv Charter School’s softball coach. Seeing the kids he coached as middle schoolers compete against each other in a high school regional final was a proud moment for him.

“Watching players you’ve coached grow and develop and not be stagnant, and know that some of the things you taught them, they’re utilizing them on the field – whether it’s with you or against you – is an unbelievable feeling,” Allen said.

The families of the Admiral Farragut trio were able to watch their loved ones play 15 miles from the Brighton Reservation rather than making the two-hour trek to the school’s home field in St. Petersburg.

It was fitting that two Seminoles figured in the game’s decisive play. After four and a half scoreless innings, Delaney sparked Moore Haven with a one-out double into the right-center gap. It was the game’s only extra base hit. Kalgary followed by choosing the same route. She poked a single that brought home Delaney with the game’s lone run.

“I had faith in her that if I got it in play, she would score,” Kalgary said.

“Tonight, Delaney Osceola and Kalgary Johns, those are our heroes,” Allen said. “Delaney is a kid who spent three years in Okeechobee and never really got an opportunity to play, came here to Moore Haven and just said, ‘Coach, give me an opportunity to show you I can play,’ and tonight, walks in at the biggest moment and hits a double. Kalgary, who I’ve been working with unbelievably in the (batting) cage, tonight gets inside of a pitch and hits it to right field and one run wins the game.”

Moore Haven’s dugout was confident that Kalgary would come through in a clutch moment.

“She gets pretty solid hits when we need them most of the time,” Darlah said. “So it’s good she came through for us and brought ‘D’ around.”

Highlights for the Tribe on Admiral Farragut’s side included Deliah, Alicia and Martina with one hit each. Even though his former players reached base, Allen didn’t seem to mind too much. He enjoyed seeing how the fruits of his coaching days at PECS have ripened.

“It was neat,” he said. “It was heartwarming to watch how much they have grown since they left me, and the fact they were playing for a regional final and just three years ago we were all playing together in middle school and we were talking about development … I’m extremely proud of them.”

Martina would have had another hit but her line drive in the third inning was snagged by Darlah, who made a diving catch to her right in her final home game for the Terriers. The defensive gem brought a roar from the hometown fans as did Darlah’s performance two days earlier in a 2-0 regional semifinal win against St. John Neumann when she had two hits, scored one run and stole two bases.

Moore Haven finally breathed a sigh of relief in the regional final after its ace pitcher Olivia Everett retired the side in order in the seventh to finish a hard-fought battle. Seminoles from both teams correctly figured the game would be close.

Even though her team’s season ended, Deliah departed the field in an upbeat mood.

“It was a privilege to play against our own people that I’ve been growing up with since I was in middle school,” she said. “To be able to play them this far into regionals, it was a privilege. I liked it. I enjoyed it.”

Playing against her friends only became a reality for Deliah when Admiral Farragut and Moore Haven both won their first two games in regionals.

“I didn’t even know we’d play them until my mom told me if we win [a regional semifinal] then we play Moore Haven,” Deliah said. “I was like, ‘We’ve got to win this game. I want to play Moore Haven so bad.’”

Deliah said she enjoys attending Admiral Farragut, where she boards. She hopes to be on her way to a career as a military nurse.

“It’s a naval academy/preparatory school. They help you get ready for college. It’s just like college life. It’s really awesome. We wear uniforms,” she said.

Deliah was productive at the plate in regionals with five hits and two RBIs in three games.

“They’re just really good kids to have on the team,” she said. “Our team really gets along. It’s fun to see. We have one senior and all the rest are underclassmen. For us, we just keep getting better and better every year, but we have good kids that make that happen.”

Deliah and Martina, both sophomores, covered two-thirds of the team’s outfield all season.

“Deliah and Martina have been steady in the outfield the whole time,” Derk said.

Martina delivered two RBIs and a hit in a regional semifinal win against Northside Christian.

Alicia, an eighth-grader, made the most of her first season on the softball team. She joined after finishing her basketball season and promptly batted over .300, which included two hits and three runs scored in a regional quarterfinal win against Calvary Christian.

“Being in eighth grade and not getting a whole lot of practice, it took her a little more time to get her feet wet,” Derk said. “We put her on the left side (at the plate) and worked on her slapping, and she’s done a tremendous job as the No. 2 batter.”

After the final out was recorded and postgame handshakes concluded, Allen and the Seminole players from both sides met in the pitcher’s circle to share hugs and laughs, just like old times.

“Each one of them played a role tonight that was instrumental in their team having an opportunity to win,” Allen said.

Admiral Farragut headed back to St. Pete with a 15-7 record. Moore Haven advanced to Vero Beach for the state semifinals for the second straight year.

The Terriers fell to Miami-Westminster, 11-3, on May 5. It was the final game for Darlah and Delaney. Both seniors went out swinging. Darlah was 2-for-4, scored a run and stole two bases; Delaney had a single and a stolen base.

Moore Haven, which won its district championship in mid-April, finished 23-6 in Allen’s first season at the helm.