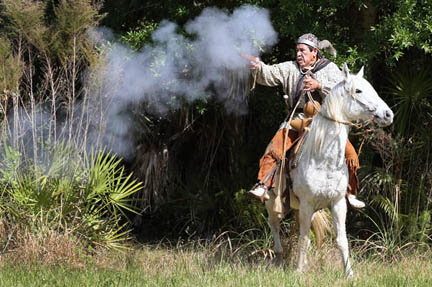 BIG CYPRESS — Battles from the Second Seminole War, the longest and most expensive U.S. war waged against Native Americans, were realistically reenacted March 13-15 for descendants of both sides.

Deadly skirmishes during the 1835-1842 war took place in the same general vicinity as the reenactments at Billie Swamp Safari in Big Cypress. Tribal members and other reenactors donned authentic uniforms and used period weapons to stage battles.

Daily crowds, more than 2,100 over the three-day event, watched the action from a hill overlooking the battlefield as U.S. soldiers were soundly defeated by guerilla tactics used by the Seminoles. Led by medicine man and warrior Abiaki, also known as Sam Jones, they fought valiantly and never surrendered.

“Today we run like dogs; our warriors diminished, our horses gone, we have no cattle or crops,” Moses Jumper Jr., acting as Abiaki, said to the crowd. “I don’t understand what it is they hate about us. They want Florida but there is plenty of land for all of us. We want to live in peace and yet you come and follow us and try to exterminate us from this earth. We have nowhere else to run, so today we must make a stand and fight. We have guns and we will fight until the last drop of Seminole blood is poured on this land.”

Spectators watched as U.S. soldiers marched into the open, lined up and took orders from their commander on horseback. Meanwhile, Seminoles hid in trees and emerged on foot or horseback only to fire weapons and scurry back to the cover of the underbrush. Only when most Army soldiers fell did the Seminoles appear in the open to finish them off with hand-to-hand combat.

“Every second I do this I’m honoring my ancestors who did their part so I could live here,” said Tylor Tigertail, 21, who has participated in the Shootout since he was 13. “It lets me do my part to educate the next generation. This year there were more soldiers than Indians, which made it more realistic.”

Tribal members of all ages played a part in the reenactment, along with non-Tribal reenactors who travel the state for other historical shows. Jumper’s grandsons Riley “Coyote” Jumper, 9, and Talen Jumper, 5, were part of a Seminole “family” chased out of their chickee by soldiers.

Pedro Zepeda, who has played the part of a Seminole warrior for 18 years, said the event accurately educates people about Seminole history.

“Changing people’s misconceptions is a challenge,” he said. “It’s easier to teach people who don’t know anything about Seminole culture than those who have erroneous information.”

Escaped or freed slaves fought side by side with Seminoles during the seven-year war and subsequently became black Seminoles. Gerald Wellington, who traveled from Chattanooga, Tennessee to participate in the Shootout, helped tell the story of black Seminoles.

“They had a lot to lose, so they fought along with the Tribe,” Wellington said. “They wouldn’t have shipped them to Oklahoma; they would have been sent back into slavery.”

The 18th annual event had plenty to offer in addition to the battles, which were complete with the sounds of canons and gunfire. Tribal members also demonstrated Seminole stomp dancing, and Zepeda shared the legend of how Seminoles learned to dance.

“A long time ago we didn’t know how to dance,” he said. “A hunter sat under an oak tree and took a nap. He woke up disoriented and couldn’t find his way out of the woods. He kept winding up at the same tree. A whooping crane flew down and told him he was walking in circles. ‘I can help you; I can fly up and see the way and lead you to your village,’ the crane said. ‘I’ve seen your village and you guys just can’t dance. I will teach you how to dance.’ From that point on, we knew how to dance. We always start with an opening dance that honors that crane.”

Other attractions included authentic Seminole and soldier camps, which were manned by the 54 reenactors. They welcomed visitors, posed for photos and answered questions. Interactive activities like tomahawk throwing and blacksmithing were all faithful to the era and drew long lines of those who wanted to give them a try. Chunkey Stone, a historic Native American game, gave attendees another taste of the past. One player threw a stone while his opponent threw a spear as close to the stone as possible.

Traditional Native American arts and crafts, jewelry and walking sticks were among the items available for sale. Seminole food, including frybread, Indian tacos and barbecue, was a hit with the crowd.

Boy Scouts, 499 of them, came from all over the state for the event and camped onsite not far from the battlefield. Troop 888 from St. Cloud was 63 boys strong as they attended the Shootout for the fifth time.

“This is their favorite event of the year,” Scoutmaster Robert Garza said. “They hold fundraisers all year to come here.” 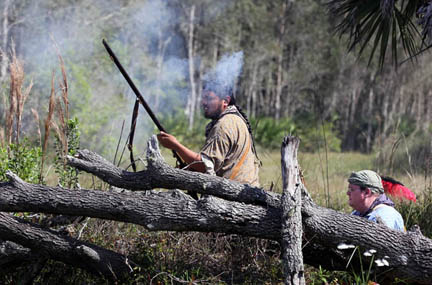 The Tribal Historic Preservation Office exhibit provided an overview of the Seminole Wars, complete with a timeline and photos of leaders on both sides of the conflict.

“We have to make sure we get the truth out,” Moses Jumper Jr. said. “There aren’t a lot of reenactments with Seminoles. A lot of young people don’t know about our past and the battles we never lost. I hope people get to see a side of this that they don’t see in history books.”