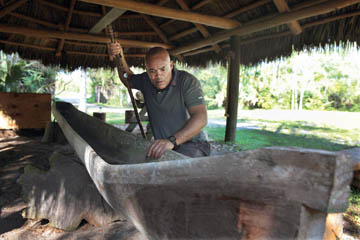 Mooney, a Canarsee Tribe descendant from New York, has spent the last decade attempting to cross the Atlantic Ocean to raise awareness for AIDS testing. During his fourth attempt, he finally succeeded when he made landfall on the Caribbean Island of St. Martin after rowing about 3,000 miles for 130 days from the Canary Islands off the coast of Africa. The final leg of his journey will take him from South Florida to New York’s Brooklyn Bridge.

Mooney strives to encourage individuals to get tested for HIV and AIDS. He lost a brother to the disease and has another living with HIV. March 20 was National Native HIV/AIDS Awareness Day, and Mooney said he felt compelled to spend the day with other Native Americans.

He reached out to the Seminole Tribe and began the day with Daniel Tommie well before sunrise. The men built a fire, watched the sunrise, paid tribute to their ancestors and gave thanks for the journeys on which they are traveling.

“It was a privilege for me to assist him,” Tommie said. “I prayed for his safe journey and for him to complete his task. We talked about our personal challenges, what made a difference in our lives and about not ever giving up. It was a great experience; I was honored to meet Victor.”

Fire represents strength to Mooney, 49, so he burned a piece of his damaged boat, the Spirit of Malabo. The Republic of Equatorial Guinea is his major sponsor, so he named the boat after the nation’s capital.

“What I was hoping for to start the day was achieved,” he said. “The highlight was interacting with Daniel; I made a new friend. We shared stories our grandfathers told us. Oral history is a big part of our culture and we agreed it’s important to share it.”

Mooney also toured Ah-Tah-Thi-Ki Museum, walked through the boardwalk to the village and learned about native plants and animals. A rower since he was a young boy, Mooney was impressed with the authentic dugout canoe on display in the village near the ceremonial grounds.

“The holes in the canoe aren’t for drainage, but people think they are,” community outreach specialist Reinaldo Becerra said. “They were so whoever was making the canoe would know how deep the wood went.”

Never give up are words Mooney lives by and now he knows how to say them in Mikasuki. Tribal member Linda Beletso taught him to say, honchetek, during his visit to the village at Ah-Tah-Thi-Ki. Mooney spent the night in a chickee at Billie Swamp Safari.

“I knew it was important for me to be on tribal land today to reconnect with Mother Earth and say thank you,” he said. “I feel a special connection to my ancestry and am proud of it. What better sendoff than to come home to your ancestors.”

Mooney’s first attempt to cross the ocean began in 2006 but ended when his boat sank off the coast of Senegal. He tried again in 2009 but aborted the mission when his water system failed. The third time wasn’t a charm in 2011 when his boat took on too much water to continue and he spent 14 days in a life raft.

His latest boat, custom-made from wood and fiberglass in Brazil, was certified for the trans-Atlantic crossing. It was equipped with the latest technology, the same as any yacht or container ship, and includes an automatic identification system radar (AIS), which made his boat appear “as big as a cruise ship” to other vessels, Mooney said. A second radar system, two satellite phones and additional standard marine equipment kept him in touch with authorities worldwide. He was in communication with local coast guards, the U.S. Coast Guard and the National Oceanic and Atmospheric Administration.

After training for five months, Mooney left the Canary Islands on Feb. 19, 2014 and landed in St. Martin more than four months later. From there he visited the British Virgin Islands, Puerto Rico and the Dominican Republic.

During the journey, he was attacked by whitetip sharks, which left holes in his boat, and by Haitian robbers, who left him with nothing but a severely damaged hull.

Mooney left Monte Cristi on the northern coast of the Dominican Republic in late October, and after a few days at sea, he noticed four boats following him. They got close enough to bump his boat and finally threw a line and tied his boat to theirs. Mooney sought refuge in his cabin, where he turned on the emergency signal monitored by government agencies as his craft was dragged back to land near Tortuga, Haiti by the pirates.

“I didn’t understand their language,” Mooney said. “Since they have nothing, they believe anything that comes near them belongs to them.”

When they reached land, Mooney said about 40 people jumped aboard and he was taken off his boat. The Spirit of Malabo was stripped bare by the time the U.S. Coast Guard arrived by helicopter. He was taken to Port-au-Prince, where he made arrangements for what was left of the boat to be transported by container ship to Miami. The boat is undergoing complete renovation at the RMK Merrill-Stevens shipyard on the Miami River.

Mooney is nearing the end of his 5,000-mile journey. He plans to row 1,500 miles up the Intracoastal Waterway to New York, which should take about two months. He plans to donate the boat to the United Nations in September as a symbol for an AIDS-free generation.

Mooney lives in Queens with his wife and three children. For more information and to follow the rest of his journey, visit www.GoreeChallenge.com.