BRIGHTON — Sharing history and personal stories was the theme of the Jan. 19 tribal wide Senior Culture Day in Brighton as seniors from every reservation gathered to enjoy each other’s company, a traditional Seminole meal and some shopping.

Around the tables and on the big-screen TV under a large tent, Tribal members shared stories and reminisced about their youthful activities and escapades.

“Thanks to everyone, there will be a lot of stories told today and you are giving me a chance to learn something,” said Brighton Board Rep. Larry Howard in his welcome remarks to the crowd. “You have all paved the way for me to have the opportunity to represent you.”

In 2004, a video was produced by the Board because Tribal citizens needed home sites but no one knew the precise history of the camps on or near the sites. The Tribal Historic Preservation Office didn’t exist yet, but information was necessary before home sites could be approved. Johnny Jones, who served on the Board at the time, spearheaded its production.

The video, which was the highlight of the day, featured Tribal citizens talking about growing up in Brighton. Memories were shared of grandparents, parents, camps, childhood, family life, school, work and more. The crowd of about 100 seniors appreciated the trip down memory lane.

“It’s always good to get seniors together to swap stories and tell on each other,” said Big Cypress Board Rep. Joe Frank.

Childhood memories that were shared included making things with palm fronds to play with instead of dolls, and riding wooden stick horses in the woods all day long. Stories of fishing, hunting, horseback riding, swimming in ponds and swinging on vines like Tarzan were met with nods of recognition by the seniors.

“We always had someone to play with,” Willie Johns said on the video. “We were dirt poor but nobody knew it because we always had food to eat. It was a great life and I don’t regret it at all.”

“Red Barn was our playground,” Amos Tiger said on the video. “We’d go up in the loft and play. They used to get mad at us for dumping the hay down. It was our historic playpen.”

Stories of hard-working Seminoles were recalled and included grandparents and parents who spent time picking produce in Florida fields, their children along with them. Earnings were tiny, about one dollar per day, but groceries didn’t cost much at the time.

“My family was mostly labor workers,” Johns said. “They planted grass and probably planted all the good grazing pastures in Okeechobee and St. Lucie counties.”

Keeping a subsistence garden was a common practice throughout Brighton back in the day. Corn, pumpkins, pole beans and potatoes fed families.

“We mixed sour orange juice with honey, that was our lemonade,” Connie Whidden recalled in the video. “It was that or sofkee.”

Medicine was practiced in the traditional way. Many grandparents mentioned in the video knew how to do Indian medicine, but sometimes they would recommend going to a medical doctor.

“My sister got sick with the flu and Josie Billie told my mom to take her to the hospital,” Edna McDuffie said in the video. “It was double pneumonia. Even the medicine man knows what he can and cannot do.”

Schools and school nurses were discussed and at the memory of shots being administered, seniors erupted into laughter.

According to the stories on the screen, the nurses used the biggest, sharpest needles they could find.

School was also the place many Tribal students first felt the sting of discrimination. Since the students weren’t proficient in English, they were not allowed by teachers to play with the other children. Cultural differences, such as being taught at home not to look someone directly in the eye, were also barriers for them. At school they learned reading, writing and arithmetic along with
how to talk to people and look them in the eye.

Women from the Big Cypress, Brighton, Hollywood and Immokalee culture departments worked together in the cooking chickee to prepare a Seminole feast. Sofkee, fry bread, lapalle, fried chicken and catfish were some of the traditional fare on the buffet table.

After the video ended and before lunch was served, a few seniors spoke to their peers and everyone else in attendance.

“You lived the culture, what you observed from your elders is what you learned,” said Martha Jones. “It’s up to you to pass this down to the next generation and tell them they need to pass it down to their kids. We teach our children to make sure our culture doesn’t get lost. What you know, that’s what you will live by.”

Willie Johns echoed that sentiment and voiced his concerns for the future of the Tribe.

“My uncle Willie Gopher said a profound statement that stuck with me my whole life,” he said. “If you don’t speak your language and don’t have a clan, what are you going to tell people who you are? That made it my point in life to learn everything I can.” 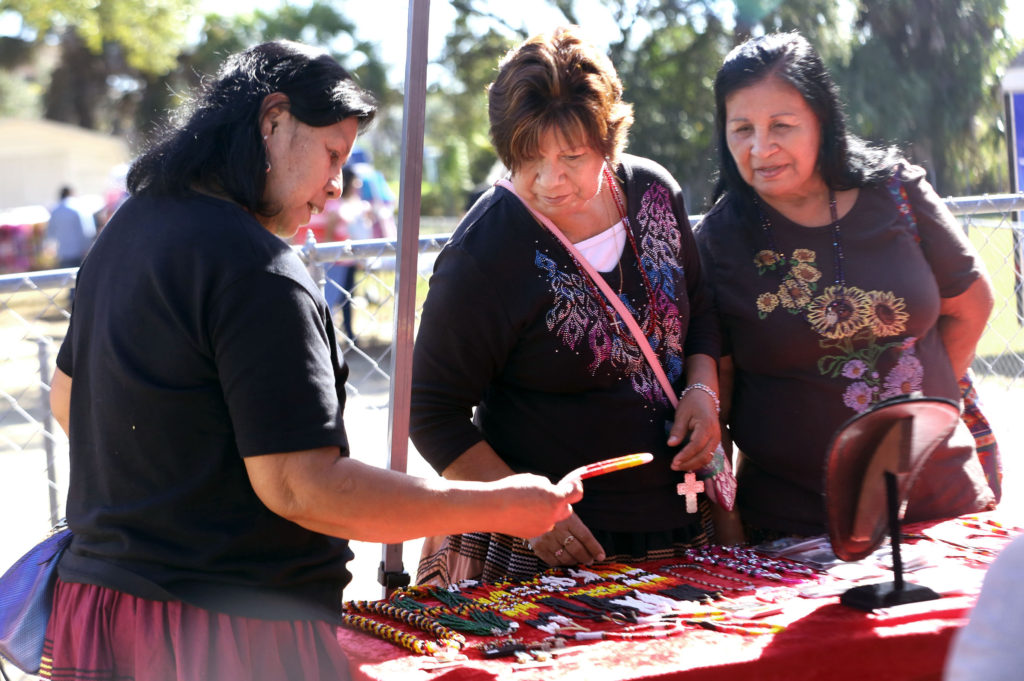