HOLLYWOOD —The 17th annual Rez Rally brought together all the Seminole Tribe’s reservations with 474 people who ran and walked amid a nostalgic environment on the Hollywood Reservation as many Tribal citizens hadn’t seen each other in years prior to the rally.

“This is one of the few events throughout the year where the entire Tribe gets together,” said runner J.D. Bowers. “I enjoy the rally because it creates positivity and encourages health in the community; especially, for the kids.”

Walkers and runners registered in the Classic Gym. They were designated different color t-shirts according to their reservation before setting out for the 2.9-mile course.

Miranda Motlow, of Tampa, said she had a fun time with family and the race was a great way to stay healthy. “I hope everyone had a good time, and I hope more people continue to come out and participate,” Motlow said.

Tables inside the Howard Tiger Recreation Center were decorated with diabetes brochures and information as part of an effort to combat the disease that plagues the Tribe. An awards reception and brunch, sponsored by the Seminole Hard Rock Hotel and Casino in Hollywood, was held after the race.

According to one of the brochures, 68-year-old Tribal citizen Nancy Shore has managed her type 2 diabetes with medication for 30 years. In the last two years, she has managed to lose weight and reduce her glucose and cholesterol levels by participating in diabetes management classes, diabetes-friendly cooking classes, and weight loss challenges.

Nearly 16 percent of Native Americans suffer from diabetes and are almost three times more likely than any other ethnic group prone to getting the disease that inhibits the body from producing hormone insulin, according to the American Diabetes Association. The Rez Rally’s purpose is to help gather people together to beat odds against the disease and to promote fitness within the Tribe.

“[Seminoles] love to eat; so they gotta get a little bit of exercise,” joked Rosie Alanis, event coordinator for the Rez Rally.

Alanis, of Tampa, participates in at least three marathons a year, including the Marine Marathon, Gasparilla and the Miami Marathon. She walked with Tribal elders Mandy Frank, Peggy Cubis and Suzie Doctor in the race.

Other highlights were not hard to miss as certain volunteers went the extra mile this year in cheering on runners and walkers.

Brownie Girl Scouts Teena-Maree Covarrubias and Avahny Jim teamed up with their fellow Brownie and Junior Girl Scouts to cheer on runners and walkers as they passed out water and later handed out medals at the finish line. The Girl Scouts continued to help volunteer in different capacities,they won a community service award, and were even able to sell their entire Girl Scout cookie inventory onsite at a remarkable amount of 156 boxes.

“I’m so humbled by how united the Seminoles are and how family-oriented the Tribe is,” said Marite Ricardo, Girl Scout troop leader. “It’s a beautiful experience to be a part of such a unified culture.”

The Girl Scouts weren’t the only ones who achieved a milestone. Hollywood captured this year’s trophies for most tribal participants and for overall team participation.

“Running is fun,” said Rhett Tiger, who participates in the event every year. “I run track, and I like getting out and having  friends and family around.” 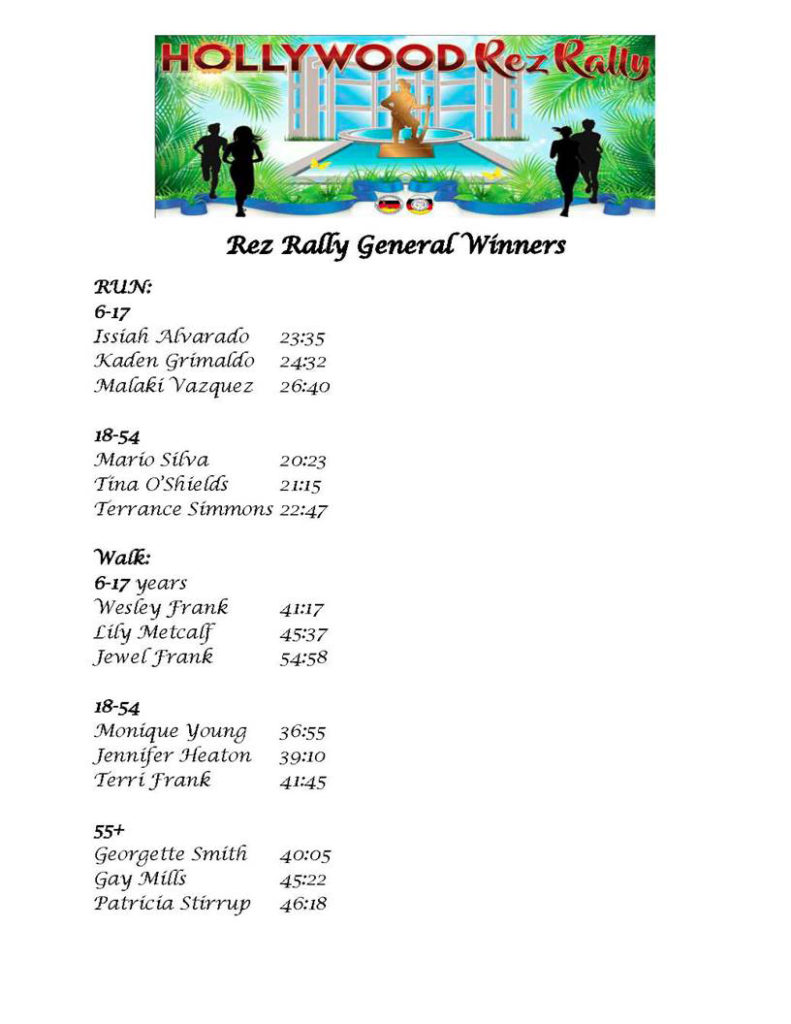