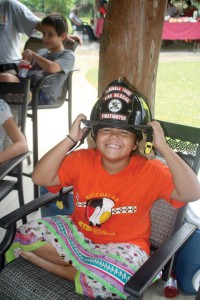 NAPLES — The children of the Naples community ran out waving their hands to greet representatives of the Seminole Fire Rescue Department when they first caught sight of the big red fire truck pulling into the driveway on Sept. 22.

As the team of professionals dismounted the truck, it was immediately apparent that this wasn’t their first encounter but a greeting of old friends. The boys and girls take fire prevention seriously and look forward to interacting with the Fire Rescue crew on a regular basis.

Swarming around the truck, they were given a thorough tour of all its compartments and equipment and learned valuable lifesaving tips to take home and teach their parents.

Kicking off the first demonstration, the boys and girls learned how fast a fire can flare up in dry grass and leaves and the importance of spreading a help alert as fast as possible. They eagerly took turns examining the fire extinguisher and learning how it works.

“If I’m burning up, I won’t run around. I’m going to stop, drop and roll,” yelled 5-year-old Angelina Osceola-Lugo as she threw herself on the ground. “I learned that from Sparky the Fire Dog.”

Fire Marshall Robert Brown assured her that Sparky and his other puppet friends Stan, Joey and Bill were prepared to take the stage for an informative show. Cheerful music announced the puppet performance, and the children crowded around to interact with the program.

“When the call comes to fight a fire, we have to move quickly,” Lt. Bruce Britton said. “Being prepared and able to move rapidly can mean the difference when saving lives and property. We have our protective clothing, 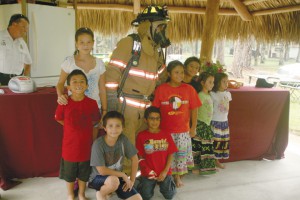 boots, oxygen tank and mask arranged in the station for immediate action to save time.”

While he dressed, the purpose of each piece of equipment was explained. Afterward, the children took turns trying on the fire hat and asked numerous questions about the oxygen mask.

Each youngster received an insulated tote bag with an assortment of school supplies to commemorate Fire Prevention Month.