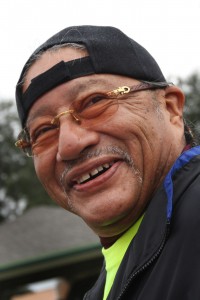 BIG CYPRESS — Mitchell Cypress is a sober reminder that redemption after addiction is possible.

The 65-year-old has lived for the past two decades painfully aware that his past had caused those he loved the most to suffer the worst.

“I drank alcohol all the time, and when I met my wife and we had our two daughters, I was still drinking,” said the former Tribal Chairman.

In 1983, Mitchell was diagnosed with diabetes; even that was not enough to make him quit the bottle. It was a rollover car accident, after a night at the bar in 1990 that scared him into rehab.

“That night I tossed my last can of beer away,” he said.

Today, he is a different man.

Mitchell, who adopted healthy eating and daily exercise as a way of life through the Seminole Health Department Diabetes Program, was elected Chairman of the Tribe in 2003 and helped establish the annual Rez Rally to prevent and combat diabetes.

In 2004, the Mitchell Cypress Fitness Trail was created to provide a pleasant outdoor workout environment for all Tribal members. In 2007, he put his unhealthy, destructive life experiences on the pages of his inspirational book, “Having Diabetes & Acting in an Honorable Way.”

Mitchell’s road to recovery was potholed by years of excuses.

He grew up hard on the Big Cypress Reservation just off the Josie Billie Highway where the clinic now stands. His father abandoned his mother, Mary Frances Cypress, who was left to raise nine children on her own while she worked at the Indian Village’s Thompson’s Wild Animal Farm.

“Tourists used to come by to take pictures of us,” he said. “They’d give us candy and at the same time, we were told how the government worked against us. We were never sure if we could trust them.”

As a student, Mitchell learned about American history – how Europeans took over the country and how the U.S. Army battled the Seminoles into the Everglades. Still, he knew he was an American citizen and at age 16, while attending the Chilocco Boarding School in Oklahoma, he joined the 45 Infantry Division of the U.S. National Guard.

Meanwhile, Mitchell collected $90 each month as a reservist and worked as often as possible as a laborer on cattle farms to buy his own clothes and food and to help support his mother back home.

After his high school graduation, during the Vietnam era, he was drafted into the U.S. Army Infantry where he played softball and was a boxer in the United States and Germany. When the war ended, Mitchell became involved in Tribal government, eventually holding several high-profile Tribal positions through 1989, which required an intense work schedule and plenty of nights out.

All the while, Mitchell was drinking. Being a husband and father of two daughters came second and third.

“I should have been a better father, but I wasn’t and now (my daughters) are deceased – both from alcohol-related reasons,” he said.

His wife is also gone. Mary Ann Billie-Cypress died before their daughters in 1987, while in his arms on the way to hospital, from complications of kidney disease.

Mitchell regrets that he used alcohol to ease his own pain of living with a sick wife rather than putting drink aside to give her a happier life. And he is forever saddened that his behavior likely led to his daughters making dangerous choices that ended their lives – Michele Cypress in 2002 at age 30 and Angie Cypress in 2010 at age 35.

“I know God has given me a second chance,” Cypress said. He has a daughter, Nichele Brandy, now 2, with his girlfriend of five years, Amy Adame, who is expecting a second daughter soon.

“I feel that the two daughters I lost to my alcohol days are returning to me,” Mitchell said. “That’s how God is working. It’s time to be a good father.”

Mitchell has no desire to return to Tribal office, but he continues community service. Daily, he helps out at the Big Cypress Senior Center.

On certain days, he heads a pack of seniors on three-wheel bikes, works out with senior friends at the Herman L. Osceola Gymnasium or checks his zen in yoga class.

“I’m not a role model by any means. I just want people to understand the two sides of life,” he said. “I was the dark side once. Now I am living brighter in recovery.”

He wants seniors – and everyone else – to know it’s never too late to adopt a healthier lifestyle and start over.

“The first step is the heaviest, but the second one is easier,” he said. “Think of it as having a tool within your reach, but the tool only helps if you pick it up and use it.”