Skip to content
You are here
Home > Community > Brighton Red Barn: Back in the saddle again 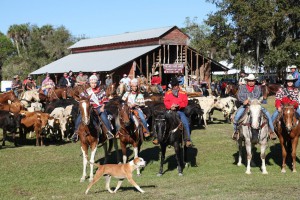 BRIGHTON — The historic Red Barn, abandoned and covered with vines for decades, flashed back to its agrarian past on Jan. 26 when cowboys herding cattle and horses, a hayride, a barbecue and the sounds of country western music once again filled the air amid blue skies, green pastures and the bright winter sun of Florida Seminole Cattle Country.

At one time the largest and most important building in the Seminole Tribe, the Red Barn was built by the federal Civilian Conservation Corps (CCC) – Indian Division in 1941, an effort to help kick-start the fledgling Seminole cattle industry. The Red Barn was placed on the National Register of Historic Places (NRHP) in 2008, though few in the Tribe knew.

That honor was celebrated, before hundreds of guests, complete with the unveiling of a plaque, speeches, a cattle drive handled by the Florida Seminole Cattle Women’s Association, an oil painting from artist Dorothy Gardiner and a full day of quips, one-liners and precious history from master of ceremonies (and Brighton’s eldest male senior) Stanlo Johns.

“The Seminole Tribe did not get organized until 1957. That’s just been a couple years ago,” Johns said. “This cattle program’s been going on since the 1930s. At one time there were seven sets of cow pens on this reservation. All this was all native pastures. Only thing we had at that time was some old milk cow someone drug up here.

“All of a sudden the federal government came in and said, ‘We gonna send you some cattle to take care of.’ I don’t know whose idea that was, but it worked out pretty good cause they sent us 400 head of straight Hereford cattle up here. Everyone in this area said the straight Hereford will not make it in this environment here.

“A terrible ordeal we had here…We had to doctor these cattle wherever they were, anywhere. When this started there were no barbed-wire fences. We had a heck of a time keeping our cattle together.

“Then they built this barn.”

“I really don’t know why [the NHRP designation] was never really officially announced before,” said Dilley, who wrote successful NRHP applications for both the Red Barn and the Council Oak.

Despite the fact the Tribe had a limited history of preserving historic buildings, she found strong support among Tribal members to save the barn.

“When we inspected the structure it was clear that the entire barn was in extreme disrepair, in real danger of falling down. Everyone we talked to was in favor of saving the structure. So a committee was formed and we decided a celebration like this would be the best way to get the ball rolling.”

“As time went along, I would ride by here on Sunday afternoons with my son Eecho. We would go down to the turtle farm and shoot ducks or something. And never really gave it much thought. People would come by and say, ‘Can we take the boards off that building so we can put it into our house?’ I said, ‘I don’t know; I wouldn’t touch it.’ Thank God they left it alone. It’s still here.

“I guess I took it kind of lightly. It’s just an old barn. You know how it goes through your head. Who the heck wants to go see an old barn? Next thing I know, it took momentum, and even this morning I thought, ‘Who the heck is gonna be out here?’ I drove around the corner and I saw all of these cowboys, all you people. Thank goodness we got something going. It’s monumental, something we can look at for a long time. I’m glad you folks came out to give this old barn a little revitalization here.”

Johns continued to delve further into the history of the cattle program.

“Cattle started in Florida. Ol’ Ponce (de Leon) left his cattle here when he was run out of this country,” he said. “They came from Spain, those old fighting bulls; they drifted on up north, west and now Texas claims ’em, and they got ’em in every state in the union. But if you trace the bloodline back, they come from here.”

President Tony Sanchez Jr. spoke of the barn’s importance as a gathering place.

“It was the meeting place for Tribal members and non-Tribal members,” he said. “It’s well-known throughout the area.”

Brighton Board Rep. Larry Howard remembered playing in the building: “We’d go down and scare folks late at night. I look at this building today and I know where we started. Today we are one of the top six cattle operations in the nation. I think that right there tells us a whole lot about where we are today. This cattle industry was started by our ancestors. They built this thing, they walked this land. Now we are here today and we’re gonna keep doing it the way they did.”

“When I was growing up in Big Cypress, I played a couple times in the Red Barn they had down there. I think it was torn up in the early ‘60s, late ‘50s, but it was the same layout as this. Back then, all the people who were in the cattle program built their camps right around the Red Barn.

“The late Morgan Smith, Henry Jumper used to have their camps situated right around the Red Barn and when they moved the shop over to where the new Tribal offices are, they moved their camps there, too. Brings back a lot of memories. Congratulations to the Brighton community for getting this accomplished.”

Councilman Bowers thanked the committee: “I think we got a good start. It is a significant thing that this structure behind me was recognized as a national historic place or building…I remember we would play football around here, and Charlie Micco used to run his horses in and out of this structure. It’s been around awhile.”

A highlight of the festivities was the introduction of Happy Jones, 86, Brighton’s eldest woman and one of the founders of the Florida Seminole Cattle Women’s Association. She was joined onstage by her sister Shula Jones and other Tribal cattlewomen.

“Hello, young people. I’m the oldest one here. I’m gonna tell you all things that I got to know,” Jones said in Creek, as Johns interpreted. “I used to come and play here as a young girl. Most of my family came from the Fort Pierce, St. Lucie County area and Indiantown.

“My daddy’s brother is Charlie Micco. Charlie had a big family. My daddy was Sam Jones. Years ago, we had a family reunion at the barn. People would trade horses for cattle, traded for whatever you need. I was one of the first women cattle owners.”

Backhouse praised the work of the Red Barn Committee and the attendance.

“It’s great to see so many people who care about a historic structure like the Red Barn,” he said.

When it became apparent that the 72-year-old structure’s deterioration had reached the point that a strong storm could level it, Gloria Wilson and the Tribal Community Planning Department stepped forward to fund the initial emergency repairs. Planks removed from both the east and west ends of the Red Barn revealed the extensive termite and water damage, as well as the first structural repairs by Armstrong Contractors Inc. and TRC Worldwide Engineering Inc. Small removed pieces of wood were given to the crowd as souvenirs.

Seminole songwriter Andy Buster and his band played throughout the day, combining their own Seminole music with favorites from Hank Williams and other country singers.

With a strong tug from Seminole royalty, the NRHP bronze plaque was unveiled for all to see. A similar marker was installed at the intersection of Highway 721 and 721A (Red Barn Road), but it will be replaced with a larger sign.

“Don’t read it too close,” warned Johns with a smile. “That’s our culture: We never correct anything after writing it down. Especially on stone.”

Red Barn Committee organizer Louis Gopher, whose family on both sides were in the cattle business, summed it up: “We need to do this. We need to preserve things like this. That’s what my mom tells me. She says you got to know where you came from before you can know where you’re going.

“This is a very important building to us. This is the grandfather of our businesses for the Seminole Tribe. You see the casinos and the commercials, but that’s like the granddaughter, the grandson. This is…where it all started, right here, for the Seminole Tribe. We kept horses here to take care of our cattle…You can’t put a dollar amount on what this means to us.”

Hard Rock International designer Rob Schaeffer, whose services were provided by Seminole Gaming CEO Jim Allen, sent a sketch of what the Red Barn and surrounding lands could look like in the future. Schaeffer incorporated ideas from community members, who were solicited for input by the Red Barn Committee. With a park, a museum, a working 4-H barn and a recreated 1940s ranch scene, he deftly merged all the best ideas into his drawing, which will be on display at the Brighton Field Office.

“We’ve got to keep on it,” said Johns, who told a story about a historic Tribal bowling alley that was torn down. “Steel ball, concrete slab, we’d set up the pins. We were going to designate that a historical area, but somebody moved in there before we had a chance. Built their house right on the place. You got to keep after it.

“It’s history…We need to have this show every year, make it an annual event.”

Gardiner, a nationally known artist, spent many days over several weeks standing before the Red Barn and painting. She produced 25 prints of the original, which she presented to Councilman Bowers, and sold most of them before the end of the day, donating all proceeds to the Red Barn recovery effort.

“I felt this was an excellent subject for me to paint,” said Gardiner, who preserves threatened places on canvas. “I am very proud to be a part of a project that will preserve this precious historical structure.”