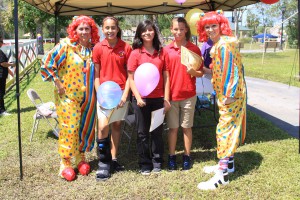 BIG CYPRESS — For the Ahfachkee School’s Third Quarter Awards Ceremony, principal Lucy Dafoe wanted to do something different this time around.

She enlisted her staff to brainstorm ideas that were outside of the box. When all was said and done, the March 30 awards presentation featured sumo wrestling matches pitting students against each other.

The event took place at the Herman L. Osceola Gymnasium.

“This is the first time we have left campus,” Dafoe said. “Usually, we take care of it on campus, but we wanted to make sure that we don’t become passive as we recognize our students. We wanted to change it up a little bit and make them feel like they’re getting rewarded for their efforts.”

“It seemed like they were really enjoying themselves and the awards they were going to receive,” said Tribal member Jarrid Smith, stepfather of pre-kindergarten award recipient Eric Green Jr. “The kids were definitely into it.”

It was the first awards presentation of its kind at Ahfachkee.

During a PowerPoint presentation, the academic awards recipients were revealed in the categories of grades, citizenship, attendance, punctuality, reading, culture and E-la-pon-ke.

“As parents, it’s good to see this happening,” Smith said. “It takes the involvement of everybody – teachers, students and parents – to make it happen.”

Ahfachkee second-grade student Daleen Osceola’s mother, Jessica Billie, also attended. She said she was happy to see her daughter and all her peers having an out-of-school experience of this magnitude.

“It feels good to see them having fun out there,” Billie said. “It opens everything up and gives them something to look forward to when they’re doing well.”

“I know they’ve come a long way,” she said. “They’ve improved a lot. I keep up with them every day, and it has paid off.”