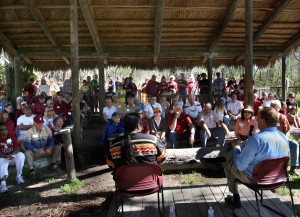 BIG CYPRESS — FSU Day with the Seminole Tribe at the Ah-Tah-Thi-Ki Museum was like homecoming of a different kind.

“Many FSU alumni think football when they think Seminoles. We’re going to show them the meaning behind ‘The Unconquered,’” said Seminole Tribe IT Tech Services supervisor Douglas Zepeda, an FSU graduate and member of the alumni Seminole Club of Naples.

The FSU Alumni Association and Seminole Tribe partnership event featured tours of museum exhibits, traditional Seminole art demonstrations, a behind-the-scenes peek at the library and archives, and a mile-long boardwalk stroll over marsh that led to a chickee village where Tribal elders fashioned jewelry, clothing and sweetgrass baskets.

Dozens met under a large chickee for one of the day’s highlights: a discussion with FSU Department of History associate professor Andrew K. Frank, who specializes in Florida Seminole Indians, and the Museum’s Traditional Arts and Outreach coordinator Pedro Zepeda.

Seated on rows of massive cypress logs, guests asked questions that ranged from the complicated, “How does the Tribe benefit from its thriving casino business?” to the basic, “What language is spoken by the Seminole people?”

The latter question was harder to answer. It depends.

“Creek primarily in Brighton; Mikasuki in Big Cypress. But people on both reservations will say they speak Seminole, and we all say we ‘speak the talk,’” Pedro Zepeda said.

Frank said student interest in Seminole culture is growing. About 1,200 students have completed his class, History of the Seminoles and the Southeastern Tribes. So far this year, 330 students have registered for the class.

“It’s one of the school’s most popular classes,” Frank said. “The biggest thing students learn is that the Seminoles and Seminole culture is living. It is not just historical.”

Students are also surprised to learn that “The Unconquered” was rooted long before becoming a slogan on FSU T-shirts.

During the Second Seminole War from 1835-1842, the Seminoles outgunned the United States Army thanks to long-established trade relationships with European countries, Frank said. For generations, people of southeastern Tribes made deals with government leaders abroad and in the United States. Trading led to Seminole survival, freedom, cattle and tourism markets, and eventual wealth.

“My great-grandfather used to buy baby alligators from Seminole men in the parking lot of University of Miami. The Seminole were never disappeared,” Frank said.

And there is much more to the tradition of beloved school symbols Osceola and Renegade than what happens on the football field.

FSU alumnus Kyle Doney represented Osceola several times. Now deputy director of the Native Learning Center, Doney said he hoped the event at the Museum would give alumni a more intimate view of the Seminole people.

“Seminole is more than a college nickname,” he said.

Allen Durham, the head of the school’s Osceola and Renegade program, explained how the tradition was started by his father, Bill Durham, in 1977, with permission from then-Chairman Howard Tommie.

“We promised to portray Osceola with reverence and respect,” Allen Durham said. “When our student takes the football field, it is done in the spirit of Osceola’s memory and a chance for him to ride again. It’s a great tribute to a great people.”

The program accepts no outside endorsements, makes no commercial appearances and never uses Renegade and Osceola to market the college, yet it is continually named first among the greatest stadium traditions of universities in the United States.

John Day, class of ’65, said he always felt honored that the Tribe allowed the school a portion of the Unconquered tradition.

“It’s not silliness on the sidelines. It’s almost religious and we respect that,” Day said.

Sandy and Paul Lambert, both ’68 FSU graduates, attended the first game that Osceola and Renegade charged the field. They drove from their Tallahassee home to attend the Museum event. More than a quarter of alumni traveled from North Florida and beyond for the event.

“It made a deep impression on all of us that Osceola was real, and we were and always will be honored to have such a hero be associated with our team,” Sandy Lambert said.