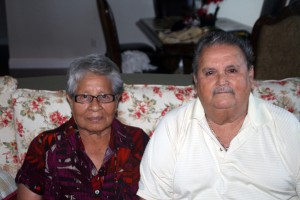 IMMOKALEE — In her 74 years, Mary Motlow Sanchez has seen the gradual transition of the Seminole people from the isolated lifestyle of their ancestors in the Everglades wilderness into the 21st century. She said that the ability to adapt and change is an important part of survival but stressed that it is equally important to remember where you came from and to preserve your heritage.

A member of the Panther Clan, Mary was born in an Everglades camp in southeastern Collier County in 1937 to Jack Motlow and his wife, Lena Billie Motlow. Her father was a hunter and helped her mother raise a garden near their main village to feed their growing family.

“When I was little, I remember that we used to set up small camps as we followed my father on his hunting trips,” Mary said. “Sometimes we would go to visit other families or trade in Everglades City or Smallwood’s Store in Chokoloskee.”

“The Silver Springs attraction near Ocala used to invite Seminole families to spend the season living in their camp to draw tourists. It provided a place for them to sell their arts and crafts,” Mary continued. “We stayed there for a short time with Charlie and Lee Cypress. I was very young, but I remember the fun we had swimming in the spring after the attraction closed for the night. The tourists would sometimes give us candy.”

The Tamiami Trail brought tourists, settlers, farmers and logging companies into the Everglades by the 1930s and 40s. As a young girl, Mary witnessed the Seminole lifestyle and economy undergoing many changes and before long she was accompanying her parents to work in the vegetable fields picking the harvest.

In search of a steady income Jack Motlow took his family to the tourist camps in Miami, and they settled at the Dania Reservation. Mary was in her early teens but had never attended school. They met William and Edith Boehmer, who had established the school in Brighton and were visiting the Seminole communities encouraging the parents to educate their children.

Lena Motlow’s father, Billy Conapatchee (a.k.a. Billy Corn Patch or Little Billy), had been South Florida’s first educated Seminole in the late 1800s. He was born near Fisheating Creek around 1856 at the conclusion of the Third Seminole War. As a boy, Little Billy lived with Capt. Francis A. Hendry at Fort Thompson (LaBelle) and Fort Myers where he attended school. He worked as an interpreter for Dr. Clay MacCauly when he made his census report on the Seminoles to the Secretary of Indian Affairs in 1880.

Unfortunately, Mary’s grandfather lived at a time when his elders had vivid memories of the Seminole Wars and distrusted the white man’s interference in their lives. He was threatened with death or expulsion from the Tribe if he did not quit school and return to his people. Little Billy married Nancy Osceola (a.k.a Little Nancy) and their children included future Tribal leaders Josie and Ingraham Billie.

Her father may have been ahead of his time, but Lena Motlow recognized the fact that her children would need an education to survive in their changing environment. Mary was sent away to boarding school in Cherokee, N.C. where she spent four years and returned home each summer to her family.

When Mary was 17, the boarding school closed. She rejoined her family who had moved to the old camp on the curve in Immokalee, so they would be close to farm work and the local school that started accepting Seminole students.

Joining the farm labor force, Mary met her husband, Tony, while working in the fields just west of Big Cypress. They have been married for 54 years and have raised five children. They currently have 17 grandchildren and nine great-grandchildren.

“I worked in the fields with Tony while our children were young and sometimes took them with me,” Mary said. “Back then whole families worked together. Picking was hard work for the kids, but it taught them to be responsible and helped them to realize that they needed an education if they wanted to get a better job. For many years, I would stay in Immokalee with our children while Tony had to follow the crops up north to support us. Finally he was able to get a job in construction and worked on a dredge.”

Mary said all parents need to encourage their children to stay in school and try to get a career they can rely upon. The children of today are the leaders of tomorrow. All of her children went to school and some have attended college and vocational training schools. Clifford joined the Marines; Chris has his own business and has worked for the Tribe; Ralph served as Immokalee Council Liaison; and Tony Jr. managed the Seminole Casino Immokalee and currently serves as the President of the Seminole Tribe. Some of her grandchildren have already graduated college and others currently attend.

“It is very important to remember that we are all God’s children,” Mary said. “When I was little and living at Dania, the Rev. Stanley Smith came from Oklahoma for revivals. This is when I was first saved and I was later baptized out at Big Cypress. My uncles Josie Billie and Ingraham Billie both found the Lord and followed his path as ministers and leaders.”

Mary and Tony have been members of the First Baptist Church of Immokalee for many years and actively participated in the fellowship of the Christian Tribal Members from Brighton, Hollywood, Big Cypress and Trail in a mission to their community. The recent completion of the Immokalee First Seminole Baptist Church fulfilled their lifelong dream of a place of worship for their family and friends.

“You need to bring your children to the church and teach them to follow the ways of our Lord,” Mary said. “Pray for our Tribal leaders that they may have guidance and the strength to make decisions that will ensure our future and preserve our heritage.”