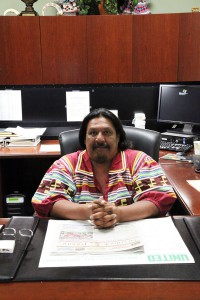 TAMPA — Among today’s Tribal officials, which Seminole Tribal government leader has been in office the longest?

Richard Henry, who is now in his 17th straight year as the Tampa Liaison to the Seminole Tribe of Florida Tribal Council. And, thanks to the community’s first Liaison election in October, he’s got four more years of service to go.

“I am very privileged to have earned so much trust that the people of Tampa brought me back to office,” said Liaison Henry from his office in the tiny Tribal headquarters building northwest of the original Tampa Seminole Reservation. “I must have done something right.”

Liaison Henry was elected by a 43-17 vote in his race against fellow Tribal citizen Keith Mitchell Simmons. Prior to the October vote, he had received appointments from Chairman James E. Billie and former Chairman Mitchell Cypress. When Chairman Billie returned to office in June, he felt an election was in order for the now 170-member Tampa community. The Tampa roll includes 80 registered voters.

Liaison Henry was one of the original 18 Seminoles – the Ruby Tiger Osceola family – who left “the flower and tomato fields of Manatee County,” he said, and moved onto the new Tampa Reservation in 1979. The expansion of Tribal gaming into the Seminole Hard Rock Casino on the site, however, caused residents to move in 2003.

“We are scattered today all over the place, from Howey-in-the-Hills to Brandon, to Plant City, three-four counties, you name it, we’re there,” he laughed, admitting that bringing his family and community back together is his biggest challenge. “We try to get together for fun and camaraderie as much as we can out at the new property. But everyone really wants to live together again.”

In 2006, the Tribe purchased 752 acres of pasture and woodland north of Lakeland, just off I-4. Forty more acres were added later. Plans exist to build some 150 (1 acre) single-family homes to accommodate the community. “It’s all waiting for the government to get its ducks all in a row,” he said, referring to the Tribe’s request for federal trust status on the property. “There’s a lot of paperwork, studies going on. I guess it could happen any time. Before we moved here, we were all dependent on each other for everything. Now, that we are apart, we are totally dependent on the Tribe. We have lost our independence. We can’t wait to become a real community again.”

Liaison Henry said he hopes he can contribute to the formation of the new community, which he said will have facilities for youth recreation and elders similar to other Tribal reservations: “But, I want to point out that we are only going to develop a fraction of this land. I want the folks in Polk County to know we really want to keep it natural.”

“My grandmother was so looking forward to it happening. She was there the day we purchased the land, but passed away without knowing if it would go into trust,” said Liaison Henry, who said county, city and state officials have been agreeable to the Seminoles’ plans. “We’ve always made a point of getting along with our neighbors.”

Once, during a severe 1985 drought in west central Florida, Bobby Henry, a Tampa Seminole resident known as the rainmaker, was called to the steps of city hall by exasperated municipal officials worried about the area’s dwindling water supply and fires. Immediately following a ceremony, the skies darkened, shocking area weathermen.

“Oh yeah, it rained gooood,” laughed Liaison Henry. “We will do anything we can for our neighbors!”