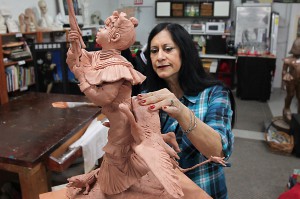 Florida “A Seminole Girl,” to be created in life-size bronze by the internationally recognized artist with help from Seminole artist Elgin Jumper and her daughter Stephanie Sneed, will grace Stranahan Landing, a tiny patch of green along the river in the city’s downtown historic district.

“She will be part of the landscape, by the river, as the Seminole always were,” Comas said from her studio, a short walk from the sculpture’s eventual destination.

Stranahan Landing is directly across the river from the 1901 home of Frank Stranahan, considered the father of Fort Lauderdale, who four decades after the Seminole Wars had established a lucrative and trustworthy trading business with the Seminole people.

Entire Seminole families parked dugout canoes at the landing and then were ferried to Stranahan’s trading post near the home where the families camped several days each time.

In 1900, Stranahan married the area’s first teacher, Ivy Cromartie. As was socially expected, she quit her job but began unofficially teaching Seminole children at the trading post camps, which further bolstered the Stranahan and Seminole relationship.

“Elgin and Jimmie Osceola inspired me to recreate a piece that is Seminole and Florida, something that represented the oldest living culture here,” Comas said. “I want to convey the message that Seminole is Florida.”

Comas was subsequently invited to view protected Seminole archives that are vaulted at Ah-Tah-Thi-Ki Museum. There, she studied photographs from 1910 through 1920.

The roughly 12-foot-tall finished sculpture will be historically accurate. The little girl’s dress, though pieced together in sections, will represent the era’s pre-patchwork designs. The palm fronds she whimsically fans through the air are still used to roof traditional chickee homes.

The threatened sandhill crane dancing at her side will take a protective pose as it pushes her forward into the future. At her skipping, dancing feet, a juvenile alligator will symbolize fearlessness, Comas said.

The sculpture will be cast using the ancient Etruscan lost wax method. In the end, its patina will be the color of terracotta.

Painted tiles purchased for $100 each by project supporters will be placed in approved patchwork designs around the base. Additional tiles, painted by students of the Tribe’s Ahfachkee School on the Big Cypress

Reservation will further embrace the sculpture base.

Interactive devices will allow spectators to hear sounds of the Everglades, children’s laughter and universal children’s songs, such as Frère Jacque sung in Mikasuki.

“It shows that we all are, after all, a patchwork of people,” Comas said.

Comas, born in Puerto Rico, earned a Master of Fine Art from the New York Academy of Art and maintains a second studio in Pietrasanta, Italy.