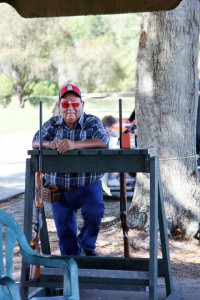 Marcellus, 67, is a man of determination and focus who cares deeply about his Tribe and family. He also likes to kick back and have a good time, cracking jokes any chance he gets.

He didn’t have it easy growing up, and he appreciates how far he’s come.

Living under an open chickee on the McDaniels Ranch just north of Big Cypress for his first five years, Marcellus remembers a simpler time with no air conditioning, no plumbing and no electricity. Kerosene lanterns lit the way, and fishing passed the time.

“When you don’t have anything, you never think about it,” he said.

His father operated a bulldozer on the ranch and his mother raised the children. She also made clothes, beaded and worked for the Miccosukee Independent Baptist Church in Hollywood and later as a secretary for the Tribe. It was a tough time for many Seminoles, and some worked alongside the migrant workers, picking tomatoes or oranges for little pay.

By the time Marcellus turned 6, the Osceola family moved into a one-room, reconditioned bath house in Hollywood to send their children to school nearby.

“My dad never went to school, so he wanted me to be better than him,” Marcellus said. His mother’s education ended in the sixth grade at an Indian boarding school in North Carolina.

Marcellus studied at Dania Elementary, Stirling Middle and McArthur High, where he graduated in 1964. He also enrolled in two trade schools, one for auto mechanics at Northeast High, and one for diesel mechanics in Miami.

Life had its own way of educating him outside the classroom. His father spoke mostly Mikasuki to him because he only knew broken English, and his mother spoke Mikasuki and Creek.

His parents also taught him about religion, raising him in the Miccosukee Independent Baptist Church in Hollywood, where he sang in the church choir and played guitar.

“They were hard-core Baptist,” he said. But he formed his own thoughts through the years, deciding, “You don’t have to go to church to talk to God.”

In addition, Marcellus learned from his father how to hunt, shooting his share of deer and hogs and grabbing alligators out of the water with his bare hands at night. And, he still has all his fingers.

“If I needed advice, I’d always ask my dad until he couldn’t help me no more,” he said. He spent much of his time with his father, his brother, Raymond, and his uncle Jimmie Osceola. He also enjoyed hunting and fishing with Howard Tommie and Eugene, Truman, Paul and Dan Bowers.

Being an athlete was also important to Native Americans while Marcellus was growing up, so he played baseball, softball and bowling. He said sports were how Indians gained some respect from white society, even though whites discriminated against them and usually refused to play them.

“They treated black people better than they treated Indians back then,” he said. “It wasn’t all that great.”

Marcellus experienced this firsthand, not just in sports, but also out on the streets. He walked into a Hollywood gas station to find two bathrooms labeled “Black” and “White” with no option for Indians. Some stores wouldn’t serve Indians either. But Marcellus wouldn’t put up with disrespect.

“I was always accepted because I made them accept me,” he said.

His fearlessness also came out in a few hobbies he picked up. In his early 20s, he drag raced his brother’s ’57 Chevy, winning a couple trophies along the way. He’s always been a sharp shooter with a gun, having ranked among the top 50 in the world in trapshooting, which he still competes in today.

Yet, Marcellus has a softer, romantic side. At the encouragement of his cousin Moses Osceola, he even learned ballroom dancing, swooning the ladies with his knowledge of the Waltz and Cha-Cha. Three wives, seven kids, 13 grandkids and a couple great-grandkids later, he is single and dating, always picking up the bill.

Marcellus loves spending time with his family and cherishes them. Like his father, Marcellus wanted a better education for his kids, so he paid for their private schooling.

Marcellus is particularly proud that five of his children work for the Tribe.

“I taught them that the dividend shouldn’t be the only thing they should live off,” he said. “I want them to know it wasn’t always like this.”

Marcellus has worked for the Tribe most of his life. As a teen, he ran the gift shop at the Indian Village, and he was a carpenter apprentice with Henry Gopher, learning form work and building concrete columns in Hallandale.

He feels most accomplished about pioneering the sale of discount cigarettes on Seminole reservations in the late ‘70s. His Seminole smoke shop was the first, once located on US-441 in what was then considered Dania. He believes it contributed to the Tribe’s financial success. He also started shops in California and New York.

Being an entrepreneur comes naturally to Marcellus by working hard and asking the right people for help.

“If there’s something you don’t know, somebody out there knows it,” he said.

After operating cranes, he started a lawn maintenance business for the Tribe.

He moved back to Big Cypress for a few years to head a construction project draining ditches and adding culvert pipes on the rez and continued his lawn maintenance work, mowing along Snake Road with his father. He returned to Hollywood when he finished the culvert job.

His next venture was a debris removal company on the Hollywood Reservation, which he still owns today. He also started an equipment business, Osceola Land Clearing, doing earth-moving, excavation and demolition jobs on and off the reservations.

“My dad was explaining to me how the Council took care of the people,” he said. “That’s what it’s always about.”

He said Tribal members kept voting him into office for this reason: “They respect me because I don’t run a welfare program.” He promoted hard work, not just handouts, which wasn’t always popular.

“The Tribe didn’t have money then,” he said. But that changed when Howard Tommie opened the Tribe’s first bingo hall and Marcellus started discount cigarette sales. He watched the money pour in, and in the late ‘80s, monthly dividends were enacted.

After his time in office, Marcellus ran the Indian Action Team Program, teaching Tribal members how to operate heavy equipment to earn a living.

He is now in his second year as Chairman of the Tribe’s Land Use Committee and is a member of the Gaming Commission.

He takes on all this responsibility for the benefit of the Tribe.

“It’s my kids and grandkids,” he said. “I want them to see what it’s like to be a member of something special…I’m not done yet.”