Skip to content
You are here
Home > Community > Pictures from the past: Rich history in black and white 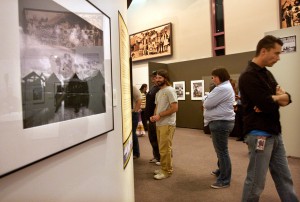 BIG CYPRESS — A photography exhibit at the Ah-Tah-Thi-Ki Museum provides a rare outsider’s glimpse into Seminole Tribal life from more than a century ago.

For Tribal member Wanda Zepeda who attended the Dec. 7 opening of “Camera-Man: the Seminole through the lens of Julian Dimock,” the nearly two dozen duo-tone photographs taken in 1910 reminded her of her own childhood not too long ago.

“When I saw the canoes, so many memories came flooding back. We used to ride them all the time; we’d go to Corn Dances…It makes me want to do it all over again,” she said.

In other photos, families pose for the camera dressed in beaded and silver jewelry and traditional Seminole garb. Men were capped in turbans decked in feathers or European straw and felt hats. Chickees were surrounded by lush wetlands as far as the eye could see.

Familiar surnames like Tiger, Cypress, Tommie and Billie are included in many photo captions.

“That’s my grandmother,” and “That looks just like my grandfather,” could be heard in whispers as students huddled in groups to check out Dimock’s work.

Milanich, on hand for the Ah-Tah-Thi-Ki opening, said he received a call in 2008 from Root encouraging him to come see 200 glass negatives from the Dimock collection of nearly 3,000 negatives that were gifted to the American Museum of Natural History in the 1920s and then forgotten.

“I’d put the negatives in the scanner, and it was like magic. We were seeing the images for the first time in 100 years,” Milanich said.

Dimock was the son of wealthy New York financier Anthony Weston Dimock who, after several successes and failures, enlisted his son as “camera-man” for adventure-driven expeditions from 1903 to 1913 in the United States’ Deep South. Much of their travels were documented in magazine articles, which Anthony wrote and Julian illustrated using two cumbersome 6 ½ by 8 ½ cameras – a single-lens camera and a tripod-view camera.

In 1910, Julian was commissioned by anthropologist Alanson Skinner, of the American Museum of Natural History, to document the Unconquered Seminoles living in the Everglades.

Clothing and other artifacts collected during the expedition, such as silver pendants and sticks used for playing ball games, are also on display.

Ah-Tah-Thi-Ki director Anne McCudden said the show, which runs through Dec. 9, 2013, serves many interests, including history, photography, geography and culture.

“It’s the perfect example of what every museum wants to offer. Everyone would want to see it,” she said.

Museum curator John Moga said the photos have inspired Tribal members to come forward with more information than Dimock originally provided. Names of previously unidentified people, locations of camps and cultural information have been added to prior descriptions.

Most of the photos were taken in what is now the Big Cypress Reservation. In fact, Brown’s Boat Landing, where the 1910 expedition landed, was located less than a mile from the current Big Cypress Landing store and restaurant on Snake Road.

“I bet that through oral histories passed down from generations, all of the camps and all of the people, not only on Big Cypress but on Miccosukee (Reservation), can be identified,” Milanich told Ahfachkee students. “It’s a project, but it’s one that can be done today in air conditioning.”

Later, when students gathered between two rows of historic canoes, the Museum’s Traditional Arts and Outreach coordinator Pedro Zepeda encouraged them to honor their heritage by learning the Seminole ways.

“But when you are learning to make a basket or play stickball or stitch patchwork, don’t just learn about the object. Learn the origins, the history, the stories, the language,” he said. “There is so much knowledge that goes with our culture.”