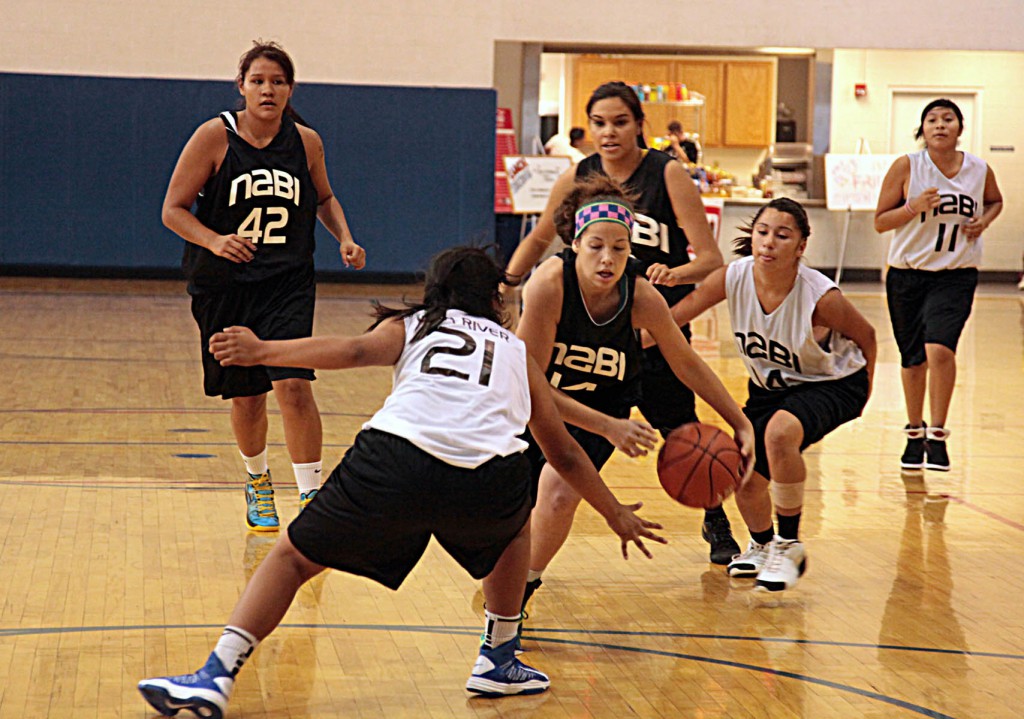 PHOENIX — Phoenix became a basketball haven from July 17-21 when more than 1,900 athletes and coaches representing 167 Tribes competed in the 11th annual Native American Basketball Invitational (NABI). The tournament, one of the largest in Indian Country, featured players ages 13 to 19.

Games were held in nine high school and college gyms, and the finals took place at the U.S. Airways Center, home of the NBA Phoenix Suns and WNBA Phoenix Mercury.

Before their first game of the tournament, J.U.S. Nation coach Andrew Jordan Bowers said the team was focused and felt good about their chances. They had been working toward winning NABI for the last four years, but J.U.S. lost by eight points to the Northern AZ Elite, known to be tough competitors.

“The game we lost was the epitome of the tournament,” Bowers said. “The gym was so crowded, people had to stand. We had about 20 fans; the rest were theirs and they all dressed in black shirts. It was so loud I could barely yell over the crowd to the team. That’s what makes it fun; you as brothers versus the whole crowd. In the last minutes of the game, we missed our free throws and they made theirs.”

Although the players were upset about the loss, it was the furthest the team had made it in four years of NABI tournaments.

“They definitely made a name for themselves,” Bowers said. “People recognized the J.U.S. name and other coaches even came to watch their games.”

College recruiters also took an interest in J.U.S. By the end of the tournament most of the team received scholarship offers, some from multiple schools, which included Little Big Horn College in Montana, Tohono O’odham Community College in Arizona and Scottsdale Community College.

“The tournament means a lot to me,” said J.U.S. point guard Phillip Jones, who received offers from United Tribes Technical College and Wentworth Military Academy. “I’ve been trying to win since I started coming here in my freshman year.”

The BBall Divas – comprised of three Seminoles, one Miccosukee and members of the Lakota Tribe from South Dakota – dominated in their early games. Their strength of play led them to the gold division bracket.

“It’s awesome to play with different Native Americans and get to know them,” said BBall Divas center Maleah Isaac. “They’re my people.”

Jude Schimmel, a star player for the University of Louisville and a member of the Umatilla Tribe in Oregon, was presented with the NABI Leadership Award at the final game. Although she never competed in NABI, she knows playing in basketball tournaments offers a positive experience for Native American youth.

“I’m impressed with the size of the tournament and the talent out there,” Schimmel said. “I believe it’s possible for anyone to achieve anything if they put their minds to it. When the door is open, you have to take advantage of it. That’s what Shoni [my sister and teammate] and I hope to do; just open people’s eyes to what’s possible.”

Since its founding in 2003, NABI has followed through on their commitment to support Native American youth through programs that encourage sports, higher education, health and wellness, and community building. The nonprofit organization’s board of directors includes the former president of the National Congress of American Indians (NCAI), the chairman of the National Indian Gaming Association (NIGA), the principal chief of the Muscogee (Creek) Nation and the vice president of the Phoenix Suns, among others.

“NABI is a great opportunity to showcase their talent and get college scholarships,” said GinaMarie Scarpa, NABI Foundation CEO. “We want them to use basketball as a tool to go on to higher education.”