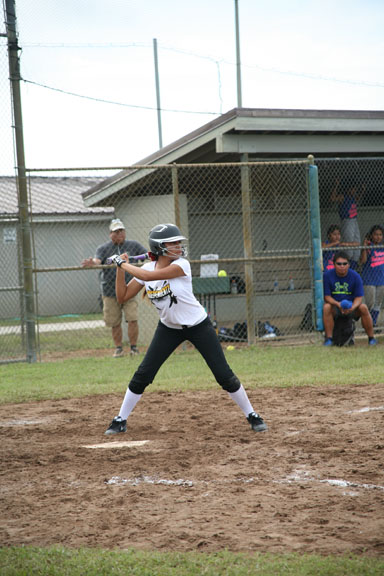 Tribes from the across the southeast United States were represented, including the Cherokees, Choctaws, Poarch Creek, Iroquois and Seminoles. The Seminole Tribe had nine teams comprised of various age groups and different reservations and captured three championship trophies.

The 7- to 8-year-old division started off tournament play on July 18. Four girls’ teams and six boys’ teams competed in the double-elimination tournament.

In the first round, the Lil’ Seminoles fast-pitch softball team lost 17-1 to MBCI Elite, of  Neshoba County, Miss.

The Seminole Warriors baseball team rallied back and forth with the Native Giants, from Choctaw, Miss., during their first round of play.

One key player, Ramone Baker, helped keep the Seminoles alive with a triple, but the Native Giants came out on top during the fifth inning. The Seminole Warriors lost 9-6.

The Seminole baseball and softball teams were eliminated during the second round of the tournament; the boys lost 8-7, and the girls were shutout 7-0. MBCI Elite went on to win the softball championship, while Poarch Creek won the baseball championship in their division.

In the 9- to 10-year-old division, the Seminole Warriors baseball team started off with an 8-0 win against the MBCI Krushers, and eventually defeated the Nation 1 team in the championship game.

The Seminole team in the 13-to-15-year-old division, Independentz, also won a championship trophy, rallying against the team Native Intensity.

Independentz, coached by Naha Jumper and Brighton Board Rep. Larry Howard, battled it out through three innings, in which the teams were tied 2-2. However, due to rain, both teams agreed to be declared co-champions for the tournament.

In the 16-to-18-year-old division, the Lady Seminoles never let up: They defeated the Poarch Creek Band of Indians from Alabama 7-3, the Cherokee team 5-2 and went on to defeat the Poarch Creek 8-1 in the championship game.  Player Janet Smith hit several home runs throughout the tournament, helping lead the team to victory.

The Hollywood Seminoles baseball team, coached by Leon Wilcox, suffered a tough 6-2, loss against the Poarch Creeks from Alabama in the championship game, putting the team in second place.