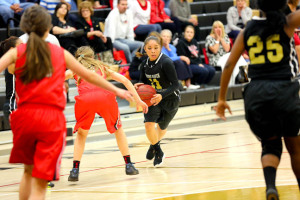 MOORE HAVEN — Before shifting outdoors for the start of softball season, the Cypress sisters made the most of their final season indoors as basketball teammates at Moore Haven High School.

Senior Darlah Cypress and sophomore Sydnee Cypress were the top two scorers for the Terriers, whose season ended Feb. 5 in a Class 3A regional quarterfinal loss at Community School of Naples.

Both girls averaged about 13 points per game and were part of a Seminole-dominated starting lineup that also included freshman Sunni Bearden and eighth-grader Chynna Villarreal.

Darlah and Sydnee have played together at Moore Haven for the past few basketball seasons, but this one carried additional significance, Darlah said.

“It’s just more sentimental. It means a lot more because we won’t get it back,” said Darlah, who scored a season-high 26 points in a win against Hialeah Educational Academy on Nov. 24.

Darlah’s last home game – a 57-37 loss to Fort Myers’ Evangelical Christian in the Class 3A-District 11 championship Jan. 29 – served as proof that Moore Haven will have a tough job replacing its captain. At times, Darlah was a force at both ends as she seized command with determined rushes down the court on her way to scoring a team-high 20 points while snagging seven rebounds. It was the third time this season she reached the 20-point plateau.

Sydnee, who hit double digits in scoring nine times during the season, finished the night with five points, six rebounds and three steals, an all-around balanced game from a versatile sophomore whose ability to play every position proved valuable.

“She played them all and did a fantastic job for us,” said Moore Haven coach Vincent Lewis, whose team finished 8-13.

Sunni, the hero in a district semifinal win two days earlier against Canterbury with 13 points, contributed nine points against Evangelical Christian. For the season, Sunni produced solid freshman numbers with an average of about eight points and five rebounds per game.

Chynna, the team’s youngest player, earned a promotion to varsity after starting the season with Moore Haven’s middle school team.

“Sunni has helped us out with our 3-point shooting and on the defensive side of the court. Chynna helps us with rebounds and defensively, too,” Darlah said.

Although Moore Haven didn’t dent Evangelical Christian’s double-digit lead in the fourth quarter, Darlah still produced a memorable final eight minutes as she scored eight of her team’s 10 points with three layups and a short jumper.

As district runner-up, the Terriers qualified for regionals for the second straight year following a 14-year absence. The Cypress girls from the Brighton Reservation played pivotal roles both seasons, which is one reason their coach delivered glowing adjectives.

Lewis described Darlah as “tremendous” both on the court and off, and “awesome” was the response when asked about Sydnee.

Lewis knows softball is the primary sport for the sisters, but he said both players have excelled on the court, which in Moore Haven just happens to be part of a new gymnasium that opened during the season.

“My ultimate goal is to get (Darlah) to an opportunity to when she graduates she will have a choice: basketball or softball,” Lewis said. “I want her to get a scholarship to further her education; it doesn’t matter what it’s in.”

Of course, the sisters still have one final sports season as teammates at Moore Haven. The softball team is expected to have another strong campaign after reaching the Class 3A state championship game last year.

“We’re really excited about the season,” said Sydnee, an outfielder and infielder.