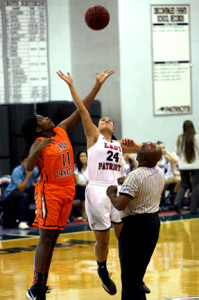 MIAMI — Blue and red banners hang from the rafters at Florida Christian School’s gymnasium recognizing the school’s athletic accomplishments since the 1960s. Baseball and boys basketball, with 12 and 10 district titles, respectively, fill up most of the allocated space on their district banners.

With four district titles entering this season, girls basketball still has plenty of wiggle room before its banner is fully occupied, but thanks in part to the Jim sisters, another year needs to be added.

As a freshman three years ago, Katherine was part of a district championship squad, but Lauren wasn’t on the team. Because this is Katherine’s final year, capturing a district title as teammates was high on the agenda for the Seminole sisters who are the daughters of Angela Lopez and the late William Jim Jr.

“We really wanted to win districts,” said Katherine, a 5-foot-8 starter who produced one of her top games of the season against Gulliver. She scored 17 points, which represented nearly half her team’s total output. She also had six rebounds and one steal. Meanwhile, Lauren, who is a smidge shorter than her sister and fills the sixth player role on a squad loaded with starting seniors, grabbed two rebounds and dished out one assist.

“It was our first district championship together and it’s her senior year, so I’m glad we got to experience that together,” Lauren said.

Five days later, Florida Christian kept the good times rolling with a convincing 61-36 win at home in Miami against Booker T. Washington in a Class 4A regional quarterfinal. After the game, Florida Christian coach Amanda Guilfoyle praised the leadership Katherine has shown throughout the season.

That leadership was tested when two early fouls forced Katherine to the bench in the first quarter against Washington. Without Katherine on the court, the Patriots struggled at times, watching their eight-point lead dwindle to three.

The lead was back to seven by the time Katherine returned midway through the second quarter. In the final four minutes before halftime, Katherine shifted into a higher gear as the lead grew from seven to 15. During the span, Katherine made three foul shots, seized two rebounds and finished a fast break with a layup.

As for that early foul trouble, Katherine didn’t commit another infraction the rest of the night. She finished with 12 points, eight rebounds and one steal.

With aspirations to play basketball in college while studying criminal science and psychology, Katherine has put in extra hours on the court. The hard work paid off. Her 9.6 points per game average was third on the squad. For the second straight season, she led the team in rebounds, this time with an average of seven per game. She had six games with 10 or more rebounds and recorded four double-doubles in points and rebounds.

“Katherine is a powerhouse. She’s fearless,” Guilfoyle said. “She works on and off the court constantly on her game. She’ll be here at 8 o’clock on a Sunday night training with her personal trainer.”

“It was very emotional,” Katherine said. “It didn’t hit me until a few hours later because my mind was so focused on the game.”

The Jim sisters’ final season together almost didn’t happen. Lauren wasn’t certain she wanted to play this season but opted to return.

“I’m glad I did,” Lauren said. “Considering how far we’ve gotten, I wouldn’t want it any other way.”

Lauren, whose top games came in victories against St. Brendan (10 rebounds) and Keys Gate (10 points), answered a challenge from her coach.

“I want you to play at such a high level that when you’re on the bench, you’re saying in your head, ‘Wow, coach is taking a risk by not having me on the court.’ That challenge has allowed her to blossom as well, and now she loves the game,” Guilfoyle said.

When the five seniors depart after this season, Lauren’s role will increase.

“She will be – without a doubt – a starter next year as a senior,” Guilfoyle said. “She’ll be the only senior. We’ll be a very young team. She’s ready to lead.”

Florida Christian finished with a 21-7 record, its second straight 21-win campaign. The Patriots’ season ended Feb. 10 with a 50-41 loss to Pace in a regional semifinal.