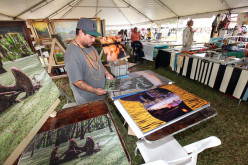 Bowers, who grew up on the Big Cypress Reservation where AIAC was held Nov. 7-8, followed in the footsteps of his favorite radio personality.

“Howard Stern’s hobby was photography, so I took it up,” said Bowers, who was among nearly 40 vendors at the annual celebration that highlights American Indian arts, culture, dance and music.

Bowers’ portfolio of work – most of which are photos on canvas – includes peaceful landscape images from remote areas of Big Cypress, such as the Kissimmee Billie Slough. Bowers literally immersed himself in his work by wading into a wet portion of the slough to get the shot he wanted.

The extra effort paid off at AIAC because his work from the slough proved to be popular with festival attendees.

Bowers, 43, arrived during AIAC’s second day as a rookie vendor, setting up a display for the first time anywhere. The Tampa resident had never sold any of his work but that quickly changed. Within the first five hours, six of his pieces, including a canvas print of the slough that fetched $350, were bought.

The financial rewards for hard work in the field wasn’t what made Bowers bask while he sat encircled in his display. Instead, he said chatting about photography with people who stopped by was his biggest thrill.

“The thing I’m enjoying the most are the questions,” he said. “They take out their phones and show you their photos. They’re letting you into their lives.”

While Bowers and other vendors worked under tents, lively entertainment filled a nearby patch as Van Samuels served as emcee. Performances ranged from a stomp dance led by Seminole medicine man Bobby Henry – whose procession included spectators – to the folksy sounds of the Chief Jim Billie Band to a dazzling display of hoop connectivity by world hoop dance champion Nakotah LaRance.

AIAC organizer Carrie Dilley said the event featured more performers this year compared to last. She added that with almost 40 vendors, it was a “full house.”

The 17th annual event also paid homage to skateboarding. With the “Ramp It Up: Skateboard Culture in Native America” exhibit from the Smithsonian Institution Traveling Exhibition Service nearing its final weeks at the Ah-Tah-Thi-Ki Museum, young skateboarders took part in a parade, a Museum tour and a competition.

Motor vehicle traffic at the corner of West Boundry Road and Josie Billie Highway was briefly shut down in front of the Museum to allow the “rolling parade” to commence. The parade attracted about a dozen skateboarders – including a few Museum employees – and kids on scooters.

Under the guidance of Ah-Tah-Thi-Ki and Tribal Historic Preservation Office trainee Quenton Cypress up front and Ah-Tah-Thi-Ki director and THPO Officer Paul Backhouse in the back of the pack, the group exited from the western driveway of the complex, cruised onto an open straightaway and then hung a right into the Museum’s main entrance.

Inside the Museum, the kids carried their skateboards as they toured the “Ramp It Up” exhibit before it was scheduled to depart later in the month.