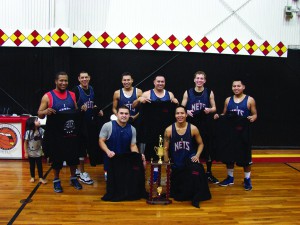 HOLLYWOOD — As they have for nearly three decades, Tribes from across the country came together to play in the annual Native American Sports Association (NASA) basketball tournament. This year, they brought their talents to South Florida for a weekend of competition and fun in the sun.

Twenty-nine teams from five Tribes competed in the Jan. 10-12 tournament at the Hollywood Gym and the David Posnack Jewish Community Center in Davie. Tribes included the Seminoles, Miccosukees, Choctaws from Mississippi, Senecas from New York and Cherokees from North Carolina.

Founded in 1985, NASA began as a way for southeastern Tribes to get together and compete in sports. Seneca coach, Eddie John, was there for his Tribe’s first tournament.

“I played in the tournament when I was a young boy and have played and coached in it most years since then,” he said. “It’s just a great tradition getting back together with Tribes from across the country. Most of the players’ dads played against each other before they did. They watched those games, and so, they get really into it.”

“It comes once a year and everybody gets so excited about it,” he said. “We don’t even have to publicize it too much. Everybody knows it’s coming, and they look out for it. You can see how they’re joking around during the games, smiling, high-fiving…these guys are just happy to be here together.”

Has Beens win the men’s tournament, despite their team name

Before the finals, the Choctaw Express led off the afternoon of the tournament’s final day on Jan. 12 with an energized win over the Savages, a Cherokee team. Justin Bell, the Choctaw point guard, put up 30 of his team’s 47 points in the victory, using his speed and game knowledge to push through the defense.

Choctaw Express coach Robert Garcia Jr. had high hopes for his team after the win.

“Hopefully, we can use this momentum to make it back to the finals like we did last year,” he said. “We lost to the other Choctaw team (Has Beens) and we’d like to get them back.”

Unfortunately, they would miss out on the chance by running out of steam in the men’s quarterfinals.

The tournament’s real stars were the victorious Has Beens from the Choctaw Tribe. Sporting their old-school New Jersey Nets jerseys, they were nothing but nets.

The Has Beens tacked on an astonishing 101 points in the championship game, winning by more than 40 points against Nothing Fancy. Players Shaun Daugherty and Demando Mingo combined for more than 50 points in the win.

Nothing Fancy, a team with members from all the visiting Tribes, hobbled into the finals with some injuries and overall exhaustion from the marathon of hoops. They couldn’t handle the onslaught of three-pointers from the Choctaws. The Has Beens took home the men’s championship title.

Early on in the women’s finals, it looked like the Ladyballers, a team of Choctaw and Seminole Tribal members, would run away with the game. Point guard Jana Plumley had wheels, controlling the pace of the first half of the basketball game.

The Seminole You Don’t Want it (YDWI) women’s team slowed the game down though, and with two minutes left in the half, center Justina George took control. Offensive rebound after offensive rebound led to second-chance points, and YDWI went into halftime with a comfortable lead. Not even Teresa Dorsett, the Ladyballers’ inside presence, could handle George.

YDWI controlled the game’s pace in the second half, cutting Plumley off early before she could zip past them. They padded their lead, and with the vocal leadership of veteran point guard, Ryneldi, the Seminole women took home the pink NASA jackets.

“I like that the tournament brought Tribes together from different states,” said Jo Jo Osceola, captain of YDWI. “I’m glad we hosted it so we could play in front of family and friends. We had a lot of support, which we appreciated very much.”