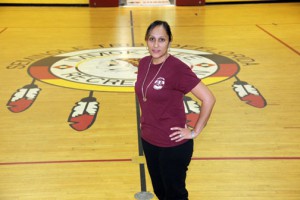 IMMOKALEE — Tribal member Cecilia Pequeno loves kids and has the energy to keep up with them all day every day. She has six children at home and spends her working hours interacting with Immokalee youth.

After seven years working with the Immokalee Recreation Department, Pequeno was recently promoted to site manager.

“I love working with the kids; they are awesome,” Pequeno said. “They make the days go by so very fast.”

As site manager, Pequeno handles programming and schedules events at the gym and the new Youth Center, and provides leadership and direction to a staff of 10 full- and part-time employees. She said her role is giving kids direction in life and keeping them physically active to prevent diabetes in adulthood. To that end, Recreation works very closely with the Fitness Department to encourage kids to stay active. Pequeno also works closely with other Tribal departments, including Education, Culture and the Ranch.

“We’ve come a long way in the years I’ve been here,” Pequeno said. “We never had a big program. We used to just let the kids come in and have open gym. Now, we are programming every hour and give them more things to do. We encourage them to try everything.”

Some of the programs offered include Sweet Rebound basketball, baseball, golf and skating. Immokalee does not have a Boys & Girls Club, but Pequeno wants to get one. Attendance during the school year ranges between six and 14 kids for each event, but during the summer, 30 to 40 children play onsite every day.

Pequeno came to the Recreation Department after spending a year with the 4-H Club. She transferred to Recreation and has loved every day on the job.

“Our doors are always open, and the kids can always come in and talk to us,” she said. “I want this to feel like a safe place; some kids in the Tribe have tough lives at home.”

In addition to interacting with youth, Pequeno appreciates the stability of the staff; most have worked in the department since she began.

Raised in Immokalee, Pequeno lived in LaBelle for a few years but came back about five years ago. She loves the convenience of the community and being surrounded by family and friends. She could see herself as a director one day or even a liaison for Immokalee.

Pequeno advises Tribal members who are wary of the rigors of working every day to just try it. She knows going to work is satisfying once you get into it and strongly encourages people to work for the Tribe.

“My mother always told me to find a department I like and go to work for our people,” she said. “I jumped right in and I love it. Working with the youth is the best because the kids are the future of the Tribe.”