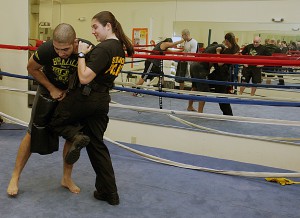 HOLLYWOOD — Sonya Cypress comes from a military family – her late father, Billy Larry Cypress, was a Native American combat platoon leader and some of her uncles served in the armed forces. Combat and weapons training is not unusual to her. Her background also led to a strong interest and aptitude in various types of martial arts.

Cypress’ latest achievement in the field is a recent certification as a level 2 instructor of Krav Maga.

Krav Maga, the official self-defense system and fighting system of the Israel Defense Forces, has been taught to law enforcement agencies, militaries and civilians around the world. Although it’s not a traditional martial arts form, it focuses on close-quarter, hand-to-hand combat in real-life conditions with the intent of stopping an attacker. Meaning “contact combat” in Hebrew, Krav Maga emphasizes simultaneous defensive and offensive maneuvers, as well as aggression.

“Krav Maga is a combat system,” Cypress said. “I want to bring it to the rez and have classes.”

She also wants to hold seminars on bullying and rape prevention.

Cypress came with Krav Maga Universal lead instructor Ernie Kirk to the Hollywood Boxing Gym on Jan. 22 to generate interest in the program and to train Seminole Police Department (SPD) officers. The previous day she held a Bully Buster Workshop for youth, which was designed with events such as Columbine in mind.

“Today’s lesson is the same one we did with Homeland Security,” said Kirk, a 3rd-degree Black Belt in Krav Maga. “We do takedowns to the handcuff position, weapon defenses and retention.”

SPD officer Christina Swindler was fighting a cold as she fought to take down the Krav Maga instructors. Dressed in uniform with her heavy utility belt, Swindler fought off her opponent while taking instruction from Kirk to improve her technique.

Cypress trained for nine years to become an instructor. She originally learned about the method when her children were in a Tae Kwon Do program. They had a Krav Maga program for adults, which she took and realized she was good at it. She also does other forms of martial arts and has competed in tournaments. Now, she wants to teach others.

“Becoming an instructor takes a lot of hard work, and Sonya has been training for a while,” Kirk said. “We teach the instructors how to teach and make sure they have the skills and knowledge to do it.”

Cypress has lived off the reservation since she was 9 years old, when her family moved to Washington, D.C. She has also worked at the Ah-Tah-Thi-Ki Museum, which was founded by her father. She has two children, Aaron, 20, and Rebecca, 15, who are both involved in Krav Maga.

Cypress’ goal is to have her own space for classes and seminars.

“I like teaching Krav,” Cypress said. “Hand-to-hand combat and weapons training is a family thing; we all do it.”