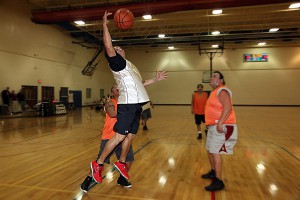 HOLLYWOOD — It is fast paced, exciting and physical, so many consider basketball a young person’s game – unless the game is part of the Native American Sports Association (NASA) tournament, where basketball lovers of all ages compete on the court.

Seven teams from three Tribes competed in the NASA Legends tournament on Jan. 10, and the players were only as old as they felt. The teams were made up of players older than 40, with the average age at 45.

“I’ve been playing basketball for about 35 or 40 years and I love it,” said Charlie Tiger, who at 50 was the oldest Seminole man to compete. “I’ve played against these Tribes, and they have some good players. But we want to win it all. We have some guys that can really run; they still have young legs on them.”

Most of the Legends players grew up playing in the Native American Youth Organization (NAYO) and graduated to NASA when they finished high school. Many of the athletes have competed against each other for years.

“The Legends are the generation that grew up in NAYO and even though they are older, they still want to play basketball,” said Moses Jumper Jr., a founder of both NASA and NAYO. “It’s good to see people I’ve known over the years. It’s also good to see some of these guys can still make their way up and down the court.”

Founded in 1985, NASA began as a way for southeastern Tribes to get together and compete in sports. Annual basketball, baseball and fast-pitch softball tournaments rotate among the member Tribes: Seminoles, Cherokees, Choctaws, Senecas and the Poarch Band of Creeks. The organization strives to promote and ensure a standard of excellence in the performance among Native American players and coaches and strives to enhance good sportsmanship, honesty, integrity, sobriety and good relationships with Native America. Jumper said NASA and NAYO are the strongest Native sports organizations in the U.S.

During the tournament, play on the court was competitive, and the Seminole teams were the ones to beat. Teams in the men’s competition included defending champions Ol Skool, a Cherokee team from North Carolina; Native American Printing (NAP), a Choctaw team from Mississippi; and Still Got Game, a Seminole team. Their initial games were played at the David Posnack Jewish Community Center in Davie. The final was played at the Hollywood Gym.

“We’ve got to bring our ‘A’ game,” said Allen McInturff, a member of Still Got Game. “For me, it’s just being able to have time with my friends and cousins from different rezzes.”

“Every rez is represented on this team,” added Gary McInturff. “We’ve been playing these guys for 20 years.”

The tournament was a double elimination. With only three teams in the men’s Legends tournament, a blind draw was conducted to give one team a first-round bye. NAP got the bye. Still Got Game played Ol Skool in the first round and won 43-41. As winner, Still Got Game then played NAP but lost. They again had to play Ol Skool and lost, sending NAP and Ol Skool to the championship game. NAP won 59-51.

The women’s games were equally competitive. Two Seminole teams played in the competition: Southern Smoke and Jus Playin. The other teams were Rez Angels, a Choctaw team from Mississippi, and 4 Corners, a Cherokee team from North Carolina. The women played all their games at the Hollywood Gym.

To get the tournament started, Southern Smoke played Rez Angels and won 33-13. The other Seminole team, Jus Playin, then took to the court and beat 4 Corners 70-39. The final matchup for the championship game was all home-grown. Jus Playin defeated Southern Smoke 69-42.

The tournaments lasted well into the night, but the teams played their hardest. Although the tournament may have been exhausting for the Legends, the chance for victory was well worth the effort.