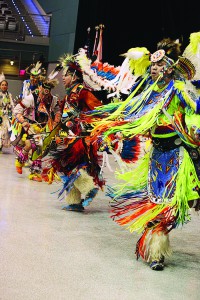 HOLLYWOOD — Not everyone is familiar with Native American culture but many have a natural curiosity about it. For those inquisitive types, the 42nd annual Seminole Tribal Fair at the Hollywood Hard Rock from Feb. 8-10 was the place to be. People from all over South Florida – and far beyond – learned about Tribal culture, enjoyed authentic Seminole food and witnessed daredevils wrestle alligators.

The weekend began with the grand entry of Seminole dignitaries, royalty and preschoolers. Tribes from across the country displayed their cultural heritage through traditional dances and colorful costumes as about 2,000 school children watched in awe.

Throughout the weekend, visitors were treated to music, dance, wildlife, alligator wrestling shows, canoe races, concerts and rodeos. Another highlight was a performance from Native American Kenny Dobbs, the 2012 NBA All-Star Weekend Amateur Slam Dunk Champion, in which he jumped over Brighton Councilman Andrew J. Bowers Jr. before reaching the basket.

“I look forward to Tribal Fair every year,” Brighton Board Rep. Larry Howard said. “Our ancestors paved the way; I just wish they could see this today. They passed the culture on to us.”

The Tribal Fair committee worked long and hard to produce the event, which ran smoothly.

“I’m getting a lot of positive feedback,” said Virginia Osceola, an organizer of Tribal Fair. “Thanks to the hard work of everyone on the committee, we’ve met our expectations.”

The purpose of Tribal Fair is to showcase Native American culture, including Seminole.

“People don’t know we are here. They know the Hard Rock, but they don’t always know the Tribe,” said Gloria Wilson, another organizer of Tribal Fair. “It’s good to get our message out to the general public.”

Members of the public appeared to be impressed by what they saw, which included 52 Native American vendors from Indian Country. The booths were busy as people bought items, including patchwork clothing, Seminole dolls and jewelry, both beaded and silver.

“We just love learning about the culture,” said Stephanie Christiansen, of Davie, who attended the fair with her son Cade, 6, and their home school group. “Cade’s great-great-great-great-grandfather on his father’s side was Mohawk.”

A couple from Italy perused the vendors searching for the perfect item.

“Everything looks interesting,” said Virginia Girolami, who attended with her boyfriend, Michael Lee. “I was interested to know if there is something remaining of the Indian culture. I didn’t know if the culture was alive.”

She learned it was and purchased a few items to take back to Florence. Even local residents’ eyes were opened by Tribal Fair.

“This is my first time here and it is more than I expected,” said Karen Black, of Davie. “I saw the alligator wrestling and the dancers. It’s all very exciting; I’m overwhelmed.”

Other locals look forward to the annual event.

“We come every year,” said Shannon McGale, of Hollywood. “We love the culture.”

Carloads of high school and college student cyclists from Team Quebec, an international group of cyclists based in Canada, made their way to the rodeo after an afternoon at Billie Swamp Safari.

“It’s pretty awesome to watch a rodeo in the United States. To see Native Americans riding is even better,” said Marc-Antoine Noel, 17, of Montreal. “We’ve all seen cowboys and rodeos on television but never in real life.”

For cowboy Greg Louis, of the Northern Cree Tribe in Browning, Mont., competing in the rodeo that honors Bill Osceola, the first Chairman of the Seminole Tribe, has become an annual family event. Louis, who is a two-time world champion bull rider, competed in the rodeo with his sons Dakota, 20, and Preston, 16.

“It’s part of the circuit and we get to see lots of family and friends here,” Louis said. “But in the end, we come to do what we have to do – win. Our goal is always Las Vegas for the championship.”

The Louis’ planned to stay in Florida for Brighton Field Day and the annual Junior Cypress Cattle Drive and Rodeo in March.

Sheila Carrillo, an anthropologist and educator who spent time in Mexico studying the Aztec Indians, attended the fair for the first time.

“All the dances were absolutely authentic,” said Carrillo, of New York. “Americans don’t have enough familiarity with Indian culture, so I appreciate that they are trying to perpetuate their culture.”

Most people came to Tribal Fair ready to be immersed in culture.

“I always love coming here,” said Robin Morini, of Coconut Creek. “There is a beautiful energy and a lot of knowledge to be had. Of course the frybread is great, too.”