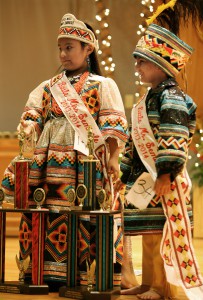 HOLLYWOOD — Pint-sized princesses and princes dressed in Seminole regalia strutted across the stage at the Hollywood Headquarters auditorium to vie for the title of Little Miss and Little Mr. Seminole 2013.

Nine boys and 20 girls, ages 5 to 7 from all reservations, showcased poise and personality while answering important questions, such as “What is your name?” “What school do you attend?” and “Who is your teacher?”

Judges came from near and far to judge the contest.

Sarafina wowed the judges with her demure princess personality. Choviahoya was outgoing. He waved at the audience, gave thumbs-up to judges and announced that he wants to be a firefighter when he grows up.

Jordan, who participated in 14 parades during her reign, gave advice to the winners.

“You have to take care of the crown and sash and take the role very seriously,” Jordan said. “Be yourself and never give up.”

Nunez, who with Aguilar, was crowned during the Tribe’s Miss and Jr. Miss Florida Seminole Princess Pageant in July 2012, said representing the Seminole Tribe is the most important responsibility, especially at events outside reservation communities.

“A lot of people do not know about our culture. They are always curious and start shooting questions at us – like if we make our own clothes or if we watch television. They are always surprised to find out that we don’t live in the woods and that we have normal lives,” she said. “It can be funny sometimes. We have to stand tall, hold our heads high and be proud.”

The event, part of the 42nd annual Seminole Tribal Fair, follows a tradition begun in 1957 when the first Tribal Council elected the first Seminole Princess. The first official pageant was held in 1960.