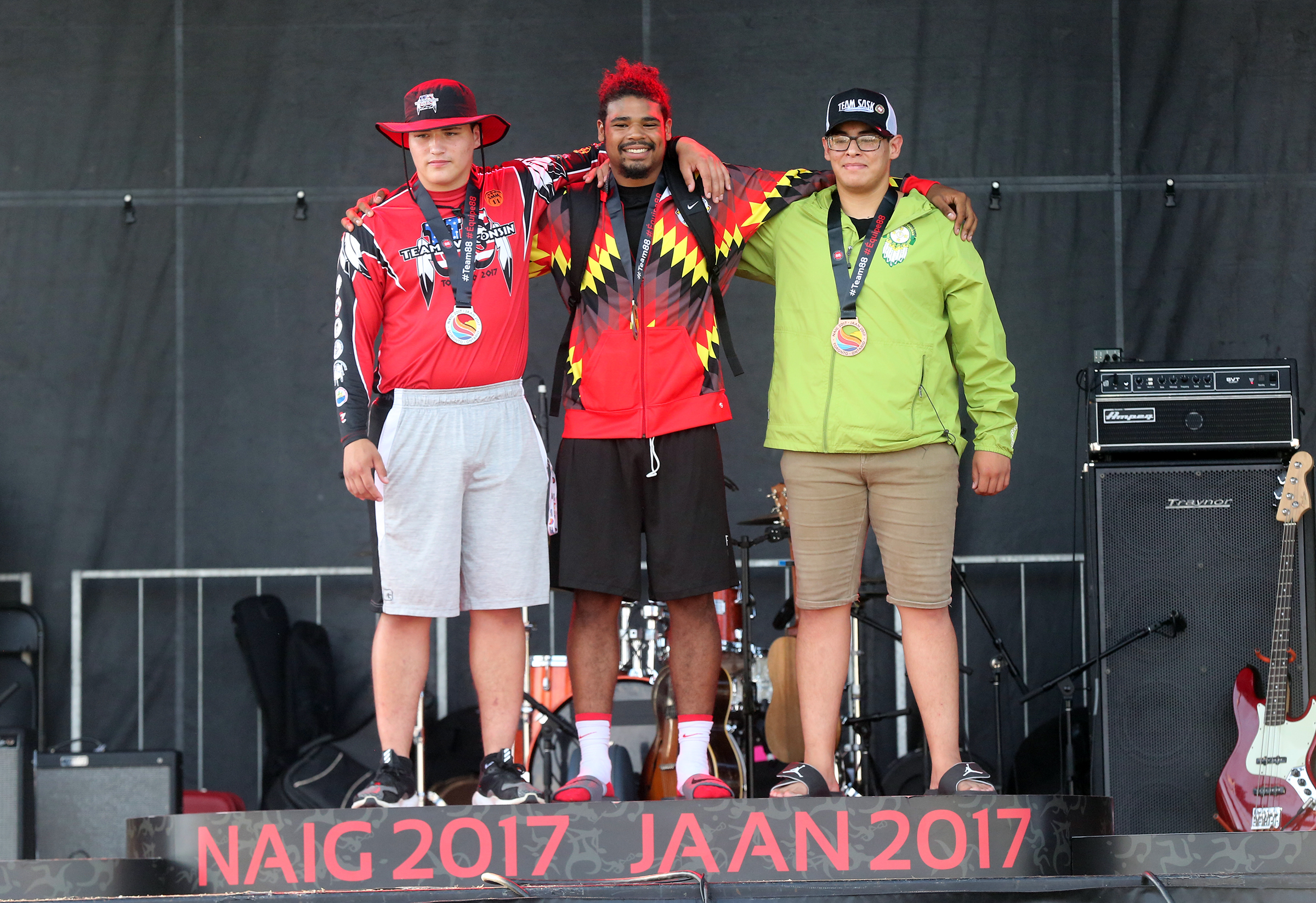 TORONTO — As thousands of athletes filled up most of Aviva Centre, Team Florida’s Seminole colors appeared to be only a speck among the colorful, flag-waving masses that surrounded them. Compared to squads such as Team Ontario, Team British Columbia and Team Wisconsin – which brought hundreds of competitors – the two dozen young athletes from the Seminole Tribe were far outnumbered as the 12,000-seat tennis stadium hosted the opening night ceremony for the 2017 North American Indigenous Games on July 16 in Toronto.

Florida athletes occupied about three rows while some of the larger teams required entire sections.

Despite fielding one of the smaller contingents, Team Florida spent the next six days not only competing in six sports, but often excelling as well. Coached in most sports by staff from the Seminole Recreation Department, Team Florida departed Canada with the proof of their success: four gold medals and one bronze.

Two gold medals were earned by Santiago “Eecho” Billie, of Brighton, whose accuracy in rifle shooting made him the class of the field. Conner Thomas, another Brighton resident with pinpoint accuracy, captured gold in archery with an outstanding performance over three days. Wrestler Sammy Micco Sanchez of Fort Gibson, Oklahoma added to his gold medal collection by winning his weight class for the second consecutive NAIG.

Aubee Billie, the younger sister of Eecho, made a lasting first impression by earning a bronze medal in her first archery competition.

NAIG is an Olympics-style competition held about every three years for indigenous athletes ages 13-19 from Canada and the U.S., although a few younger athletes competed, such as Florida swimmers Talena Holata and Kimora Alex, both 11.

nvolvement included the city’s mayor, the Premier of Ontario, an energetic opening ceremony performance from Taboo and appearances from famous indigenous athletes.

Threatening weather delayed the start of the opening ceremony by more than two hours, but it proved to worth the wait as Native performer Taboo from the Black Eyed Peas performed an electrifying show. 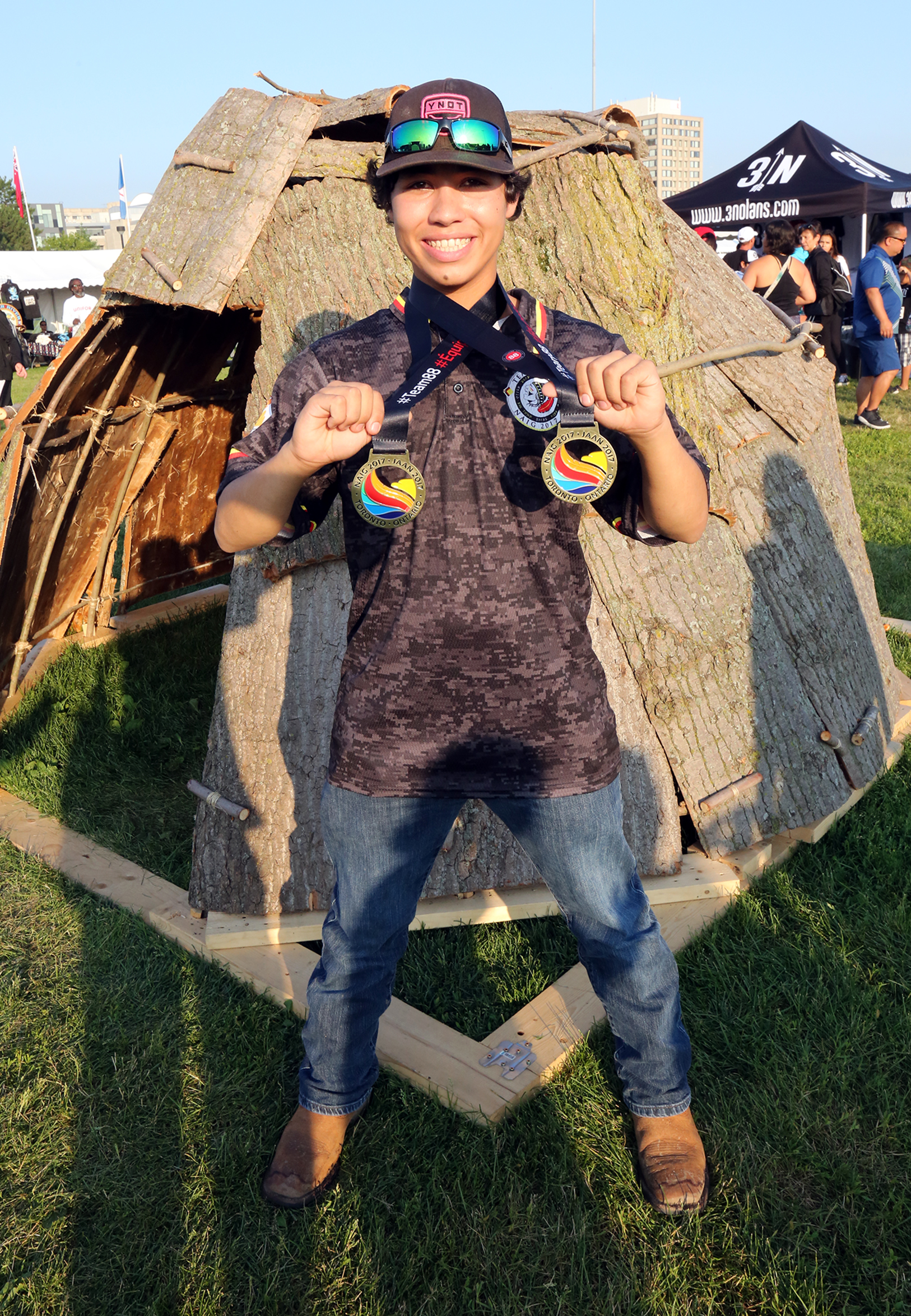 The weather delay forced officials to alter the scheduled parade of athletes. Instead of all athletes parading on the stadium’s court, a few from each squad did the honors. For Team Florida, Trevor Thomas held the Team Florida sign, Conner Thomas carried Florida’s flag and Eecho Billie proudly waved the Seminole Tribe flag.

Even with all the show’s highlights, perhaps the biggest part of the night for most of the athletes came away from the court with the NAIG tradition of trading pins, which continued throughout the Games. Each state and province brought their own team pins. The athletes gladly traded, which proved to be an ideal icebreaker for the kids to meet each other. Time after time at the opening ceremony and other venues, athletes were not shy about asking for pins.

“The opening ceremonies were really cool,” Florida archer Aubee Billie said. “I loved having everyone there, mingling, trading pins.”

“It’s fun,” said Florida track and field athlete Silas Madrigal. “I made some new friends. I met them at the opening ceremony trading pins. They’re from Ontario, Alberta, Saskatchewan.”
Silas said the friendliness of the athletes extended beyond trading pins.

“They were good at sportsmanship. Before the race, they would shake hands and say good luck, and after the race they said good job.”

Jordan Nolan, a First Nation hockey player for the Los Angeles Kings, shook plenty of hands as he doled out medals to rifle shooting’s top performers, including Eecho Billie. Nolan is a good example of an indigenous athlete whose dedication and perspiration has paid off.

“Work hard,” said Nolan, who helped the Kings win the Stanley Cup in 2012 and 2014. “It doesn’t matter where you come, a small community or a big community. I’m from a small First Nation in northern Ontario, about 1,000 people. I found a way to make it to the NHL and make my dreams come true. Just a lot of hard work and a lot of dedication.”

For indigenous kids who are struggling with issues, Nolan is proof of what can be accomplished.

“I was overweight as a young kid,” he said. “I had to lose a lot of weight when I was turning pro. I had a few off-ice issues. I’ve been sober for three and a-half years now, so I dealt with that. That’s something for these kids to know, and realize that if you have a problem to seek help and talk with your family and friends. You definitely need a team to overcome it. Hopefully the parents talk to the kids about me and say he’s from a small community and had some issues and look where he is.”

Only one Florida basketball team – the U19 boys – participated. Meanwhile, Florida did not have any baseball or softball teams, due in part to the Games occurring at the same time as NAYO’s baseball and softball tournament in Alabama.