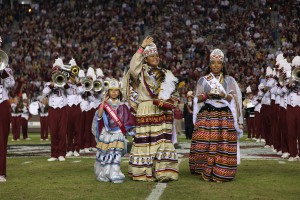 The newly crowned Miss Florida Seminole Princess Jewel Buck and Junior Miss Jaryaca Baker, joined by a host of other Tribal alumni, got their first taste of the whirlwind experience Nov. 18-19.

“It was a great experience,” Buck said. “I got to meet a lot of people and it was an honor to represent my Tribe like this. I can’t describe it all. It was a once-in-a-lifetime experience.”

The annual homecoming parade ushered in the day on Nov. 18 and proceeded on its usual route through the FSU campus with several Tribal citizens participating.

Tribal citizen Emma Urbina, Buck’s mother, said she enjoyed the first-time experience. “I was very excited for Jewel,” Urbina said. “It was all very fun because I didn’t know what to expect coming in. I am still so proud of her.”

“We (the Seminole Tribe) continue to support FSU so much that the Tribe should recognize our own graduates for their accomplishments,” Chairwoman Bowers said. “This will hopefully motivate our kids also. It’s a good way to show support through education.”

For the fourth time, Doney participated in the homecoming tradition of the flaming spear toss in the middle of Bobby Bowden Field at Doak Campbell Stadium. The tradition of more than 30 years symbolizes the Seminoles’ warrior spirit while igniting the crowd of thousands before the game.

“Even though I’ve done it before, it doesn’t take away from the fact that it was awesome,” said Doney, a member of the Alumni Association Board of Directors. “Even in practice my heart was racing.”

Beginning in 1978 in a home game versus Oklahoma State, the much-famed pregame rite featured an FSU student dressed in traditional Seminole regalia and makeup playing the role of the legendary Chief Osceola riding a horse named Renegade. Both have become steadfast traditions of FSU football, motivating thousands in attendance with tremendous dedication.

Allen Durham, program director of Renegade and Osceola, said he has taken the job seriously ever since he took over the program in 2007. He assumed the role after the retirement of his father, Bill Durham, a 1965 FSU graduate who designed, developed and paid for the program.

“Just to have the honor of playing the role of Osceola and knowing what he stood for is important,” said Durham, who played the role from 1992-94. Durham was also part of the Seminoles’ first national championship under legendary former head coach Bobby Bowden in 1993. “They (the students) need to have a great respect for the spirit of who they are personifying.”

In order to take on the coveted role of Osceola, students must maintain a 3.0 GPA, complete an essay on their desire to play the role, read about the life and impact of Osceola and have extensive experience riding horses, among other criteria.

“We want to show continued respect to the Tribe,” Durham said. “Kyle (Doney) was a graduate; his interest and the Tribe’s support is a huge honor for us at Florida State University to have.”

Spirits were also high coming into the game, as FSU put their five-game winning streak on the line against foe Virginia in a pivotal conference match-up on the gridiron.

However, in heartbreaking defeat, the Noles lost 13-14 on a missed 42-yard field goal attempt in the last minute. The Seminoles would end their regular season on a high note the following week, beating in-state rival Florida 21-7 and finishing with an 8-4 mark.