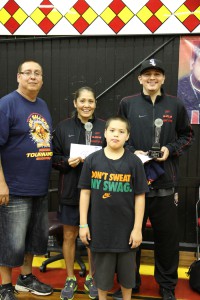 This year, teams from several states competed in the double elimination event. From recreational to professional, 17 mens and 10 womens teams participated. Trophies were awarded to the winners, and the first place team received a $12,000 prize.

Once again, members of the Huggins family coordinated the three-day tournament held Dec. 1-3 at the Seminole Recreation Gym.

“For me, it (the tournament) continues to be a healing process, so people don’t forget who he was,” said Norman Huggins, father of Randall and liaison for the Trail Reservation. “We’re just picking the ball up where he left it and it’s a family effort.”

The late Randall Huggins began the tournament prior to his death in 2000 using his own money as a way to unite and connect with the youth and his community. His legacy and efforts continue with the help of his two brothers, four sisters, other family volunteers and his mother, Kathy.

“The whole tournament reflects who he really was. He was giving and full of hospitality,” said younger brother Kelvin Huggins.

Oklahoma player Vincent Coon and his eight-member squad, named Oklahoma Criminal Indians (OCI), said it was worth the 1,400-mile trek all the way from Okemah, Okla. for the tournament.

“We select this tourney every year to come to and they (the Huggins family) really take good care of you also with all their hospitality,” Coon said.

“I still like seeing all the other (Native) nations come together through sports each year,” father Norman added.

The championships offered the exciting and familiar as the womens title game pitted Another Bad Creation (ABC) against the Native Ballers, consisting of a mixture of players from several states. ABC would control the tempo early and often with double-digit leads throughout and headed into the break up 17, with a score of 40-23.

In the second half, the Native Ballers would start out on a 10-2 run and would close the gap to within five points at the seven-minute mark of regulation. They would surge to within one point, but they got no closer; ABC would win 58-52. Raeanne West of ABC led her team in the win with 23 points. Gwynn Grant would earn tournament MVP honors.

The mens side featured the dynasty-driven Big Town, winners of the last three mens titles facing the Plainsmen, another perennial favorite.

The Plainsmen showed a spark early out to a quick, energized start and a 6-0 run in the first. BT would roar back going on an 8-2 run minutes later for their first lead. They would head into the break up 34-31.

The always formidable muscle of BT on the post proved to be the difference in the end, however, as they pulled ahead by 13 with five minutes to play. A last-minute run by the Plainsmen made it interesting cutting into the lead to within four. They missed two point-blank layups inside 15 seconds and BT would win their fourth straight championship 78-74.

Eric Beatty led the way for BT with 25 points, with Gary Parker selected as the mens tournament MVP.

The car show featured a mix of classic and modern cars. Although it was not put on in 2010, it made its reappearance this year under the organization of Tribal citizen Eric Osceola, owner of Bigg E. Customs. Trophies were given to the winners and included categories such as: Best in Show, Best Interior, the Family Choice Award and Best Motor with special guest emcee and Florida State University football great William Floyd on hand for the judging.

“It was a good turnout and I felt good about it all,” Osceola said. “People that come by the shop (Bigg E. Customs) supported it also. I hope this is something the family will help me to continue and maybe get some of the kids in the communities involved to help them stay out of trouble.”

Tribal Board of Directors President Tony Sanchez Jr. also made an appearance.

“I’m always amazed at the cars and what they can do,” President Sanchez said. “I continue to be surprised pleasantly at the number of Tribal members that have developed an interest and creativity in their vehicles. The commitment made by Norman (Huggins) and the family each year and sharing it with everyone is tremendous.”