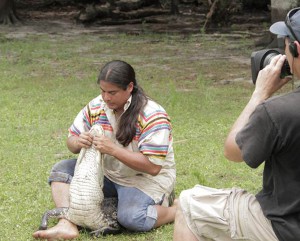 BIG CYPRESS — It’s all about the swamp.

The National Geographic television network has filmed a series entitled Swamp Men at the Big Cypress Reservation for the past three seasons, and it has generated a lot of positive buzz for the Tribe.

Several Tribal citizens have played an integral role in how the show has come about since its 2009 inception, adding to the authenticity and credibility of the well-received program.

Big Cypress Tribal citizen Cory Wilcox, one of two Tribal members involved with Swamp Men since the beginning, said the experience of being seen on televisions worldwide has been one he’ll never forget.

Wilcox was born in Fort Pierce, but he has spent most of his life on the Big Cypress Reservation.

“Being a part of Swamp Men has impacted my life to the point where I am known better by my people within the Tribe,” said Wilcox, who has been working with the Tribe’s Wildlife Department (formerly called Hunting Adventures) for the past nine years.

“The reason why I appear on the show is because I’m known for removing hogs and buffalo from the Billie Swamp Safari,” Wilcox said. “Until recently, when I wasn’t guiding hunts for the (Wildlife) Department, my job included trapping of mainly hogs, American bison and Asian water buffalo. I also had to replenish the game that had been harvested by hunters. So, because of my knowledge in the field of trapping, I was asked to be a part of the Swamp Men show.”

Meanwhile, fellow Big Cypress Tribal citizen Billy Walker, the other Tribal member in the Swamp Men since the start, has been involved with the series as a cultural adviser for the cast. Walker said that two of his cousins, Tribal citizens Jacob “Jay” Osceola and Brian Zepeda, suggested him.

“Anything that has to do with culture, they (Jacob and Brian) wanted a Tribal member to come in and share some knowledge with the world,” Walker said. “So I went out there as an alligator wrestler to show them how I catch alligators. I got a chance to show how the Seminoles and Miccosukee Indians used to go alligator hunting for a food source.” 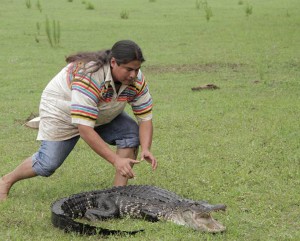 Hollywood Tribal citizen Everett Osceola, who joined Swamp Men this season, said that having Tribal members involved has been a much-welcomed and much-needed addition to the series. With on-camera face time as a past anchor for the Seminole Channel and some past acting experience, the Tribal television personality saw the opportunity as a way to represent his people from a cultural standpoint.

“I came up with the idea of asking for permission to perform alligator wrestling,” Everett Osceola said of the live, on-camera footage. “I was trying for a cultural outlook, but I did not want to step on any toes, as far as the elders are concerned. I had asked my aunt, Elsie Bowers, for permission before, but I had to ask again.”

With his aunt’s permission, Everett Osceola was filmed by the Spectrum Productions crews as he caught an alligator with Walker one day in Big Cypress. Osceola said he thought the live footage could be good to show the cultural aspect of the sport.

“It was fun for the most part, but my feet were all cut up,” he said of the experience, which will be aired on one of the 10 scheduled episodes for Season Three.

“I guess they’re not as callous as Billy’s yet, but it was a great experience and it was pretty dangerous. I saw Billy step on a gator and the gator climbed a tree like a cat. It was a sight to see, but at the same time, I was like, ‘I could step on one too.’”

For Osceola, his main concern was how his aunt would feel about the sequence being aired on the NatGeo Wild network.

“The only thing for me was this: Is Elsie going to be OK with it?” Osceola wondered. “I found out that she was fine with it all. From what I heard, it turned out to be a good episode.”

Swamp Men has an avid fan in Claudia Selva, who said she regularly watches the show. Selva recalled a show in which Jacob Osceola explained how his grandmother taught him about life on the Big Cypress Reservation and how he learned to catch alligators as a youngster.

“I like the fact that the show lets us see the history of how the Seminoles interact with the animals,” Selva said. “It’s really interesting to see how they (the Seminoles) are dressed in Native and modern clothing. It’s cool to see the Indians using ancient and modern techniques to catch the gators.”

At this time, whether the Swamp Men series will continue after this season is unknown, according to Everett Osceola and Wilcox. But one thing’s for certain: it has given the Tribe far-reaching exposure.

“You never can tell, but hey, at least I can say that I had my 15 minutes on a gator and crashing swamp buggies,” Everett Osceola said. 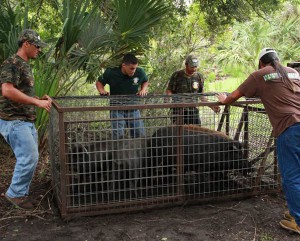 “I have had my fellow Tribal members wanting to take pictures with me, which is weird for me,” he continued. “I thought they were joking with me, but it was cool because it made me feel like a Hollywood star for the day – a Hollywood, Fla. star that is. But if the show ends tomorrow, at least I had a good ride. I tried my best, along with my fellow Tribal members and family, to help spread the beauty of our culture.”

“Swamp Men, being filmed on Big Cypress Reservation, deeply impacts the Tribe’s image and will continue to do so for years to come,” Wilcox said.

“People all over the world now know that the Seminole Tribe still exists and to this day, they can come to Big Cypress to see things you can’t possibly see anywhere else in the world,” Wilcox continued. “I just hope that I have correctly portrayed my Tribe in a respectable manner and that my people know I did my best not to offend any of my fellow Tribal members.”

The Swamp Men episodes currently air on Monday nights at 10 p.m. on the NatGeo Wild network. For more information on the series, visit www.billieswamp.com.

One thought on “Tribal members featured on National Geographic TV”