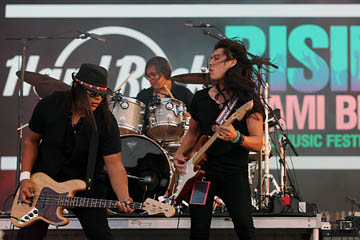 Hard Rock Rising concerts, which began in London with Hard Rock Calling in 2006, provide a forum for music icons and up-and-coming artists to connect with fans around the world, according to the Hard Rock website. In 2014, Hard Rock International hosted more than 28,000 live music events around the world to support the music industry and its performers.

“This is an amazing night for them,” he said. “We hope to give them this opportunity for many years to come.”

Spencer Battiest, who has performed at Hard Rock Rising in London four times starting in 2007, belted a heartfelt rendition of “Mary Jane,” a new original song. He watched the crowd dance to his music as he sang.

“It’s always an awesome experience to perform at any Hard Rock event and represent the Tribe,” Battiest said. “This isn’t a tribal event and they don’t have to like you, but it was a great validation to see a crowd like this respond to me.”

It was no easy feat to produce Hard Rock Rising Miami Beach; the organizers didn’t approach Hard Rock International until December 2014. Allen said other concerts take up to two years to plan but that Miami Beach Mayor Philip Levine wanted a seasoned company to produce the event.

“We have a lot of talent from around the world and we are blessed to have so much talent here,” said David Gold, Hard Rock Live vice president of entertainment, who spent two weeks on-site with his team to ensure the concert’s success. “We are pleased with the eclectic group of talent and are looking forward to next year.”

Allen said he hopes Hard Rock will have the opportunity to produce more concert events in Miami Beach during the next three years.

The Osceola brothers said they did exactly what they set out to do during their performance; they played “loud and in-your-face rock ‘n’ roll,” Cameron Osceola said. It was the largest crowd the brothers played for, and they were primed to take the stage.

“We give our all for each show,” Cameron said. “You never know who is watching or if this will be your last day.”

After darkness had fallen and parachutists with flares on their heels landed safely on the beach, Andrea Bocelli took the stage. The crowd stayed until the wee hours to hear Secada, Estefan and Gibb perform and to watch fireworks. A dance party ensued with Fantine, Flo Rida and Wyclef Jean, who provided the soundtrack.

The next Hard Rock Rising will take place July 24-25 in Barcelona, Spain.