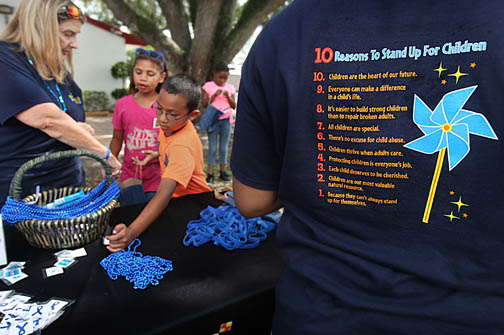 By all accounts, Ahizya Osceola should have turned 4 years old on April 15. Instead, when a solitary candle was lit on his birthday cake decorated with SpongeBob SquarePants toys, only memories provided glimpses of his happy smile and quick laugh.

It was an unreal moment for his mother, Karen Cypress, who tearfully blew out the lonely candle and thanked more than 50 family and friends who turned out to mark National Child Abuse Awareness Month at Junior Cypress Rodeo Arena in Big Cypress.

“My son should be here, but he is watching over us,” Cypress said. “Please, we have to watch, too. Be aware. Don’t overlook a single thing.”

Ahizya’s life ended tragically a few weeks earlier in Hollywood from physical abuse allegedly at the hands of his stepmother, who was subsequently charged with aggravated manslaughter, child neglect with great bodily harm and giving false information to police. His custodial father was charged with one count of child neglect.

It was because of Ahizya that tribalwide events scheduled for April to educate against child abuse took on weighted meaning.

“He was born for a reason. Ahizya will bring a lot of positive changes in the Tribe and the world,” Mitchell Cypress said.

At the rodeo grounds, white kites with blue streamers to be flown in memory of all abused children were also decorated with birthday wishes for Ahizya. A blue and white balloon release, also planned, was led by his extended family – aunts, uncles, cousins and grandparents.

“As a community, as a family of people, we have to watch out for red flags especially those little things that can go unnoticed. Sometimes, when children suffer horribly, it’s because no one speaks out,” said Pastor Salaw Hummingbird, of Big Cypress First Baptist Church.

Johnson urged attendees to become more involved – if they see something, say something.

Many Big Cypress departments staged booths that doubled as activity and information stations.

At the Boys & Girls Club table, children bedazzled hand fans that declared, “Hands are for helping, not hurting.” Adults, at the rodeo table, wrote names of children on blue ribbons and then tacked them to a larger blue ribbon poster. Erin Sexton, of the Housing Department, distributed homemade cupcakes topped with blue icing.

Big Cypress Councilman Mondo Tiger said he hopes to launch a training initiative soon for employees, Tribal and non-Tribal, across all departments for all to become more keenly aware of the signs of child abuse.

“I want to see everyone who comes in contact with our kids, from Ahfachkee School to the gymnasiums and the Culture Department, to be able to recognize the signs. Forget about the stigma of being afraid to hurt a person’s feelings. It takes the entire village to save our children,” Councilman Tiger said.

Hosted by the Family Services Department, the event fliers promised that “together we can build brighter futures for our children and families in our community.”

In Hollywood, about 40 people dressed in blue T-shirts marched through streets in a show of solidarity. But first, everyone pledged to “speak up for the rights of children; help when I suspect that a child is being abused; speak with other people in my community about protecting children … do everything in my power and authority to end the abuse.”

Participants then planted blue pinwheels in the grass to represent their pledge.

Martha Tommie, of Brighton, who had just returned from the National Indian Child Welfare Association (NICWA) convention in Oregon, said she was compelled to attend the Hollywood event because Ahizya was her grandson by clan. The NICWA conference this year focused on child abuse and neglect.

“After [Ahizya] died I knew I had to do something – that’s why I went to NICWA. There has to be some changes or there will be more children who suffer,” Tommie said as she dabbed tears from her eyes. “This is about families needing to care more about their children than alcohol, drugs, television and Happy Meals.”

Both of Ahizya’s custodial parents, and other adults who lived at the home, were known drug abusers with long arrest records.

Tommie said she knows the grip of substance abuse because she fought it herself when she faced losing her own children years ago. But she knows the battle must be waged and won.

“I don’t care if you hate me for saying it. I don’t want to come into your home and tell you what to do, but you better do something. We have to bring love back,” Tommie said.

Hollywood walkers streamed from the old gym, through the neighborhood and back to the gym. Many walked in silence while others expressed sadness, regret and determination to make the community safe for children.

“It’s so sad, but I have to come out and stand up for awareness. I can’t help at home,” he said. “My goal is that this never happens to another child. We have to stop it. There has to be a change.”