My name is Randean Osceola and I am a part of the Seminole Tribe of Florida. I am a member of the Wind Clan family and am a freshman at Sagemont High School in Weston. This summer I decided to intern at the Ah-Tah-Thi-Ki Museum through the Tribe’s Summer Work Experience Program (SWEP). I decided to write this article to inform people about our past. Below are important pieces of Native American history from A to Z.

A: Abiaka Jones “Sam” was the head of a band of Miccosukees during wartime. Seminoles joined him on his quest against the United States. For this reason his “campaign” against the U.S. was one of the most successful. His legacy is a big part of why we are here today.

B: (Chief) Billy Bowlegs “Billy Bolek” was a leader of the Seminoles in Florida in the second and third Seminole Wars against the United States. 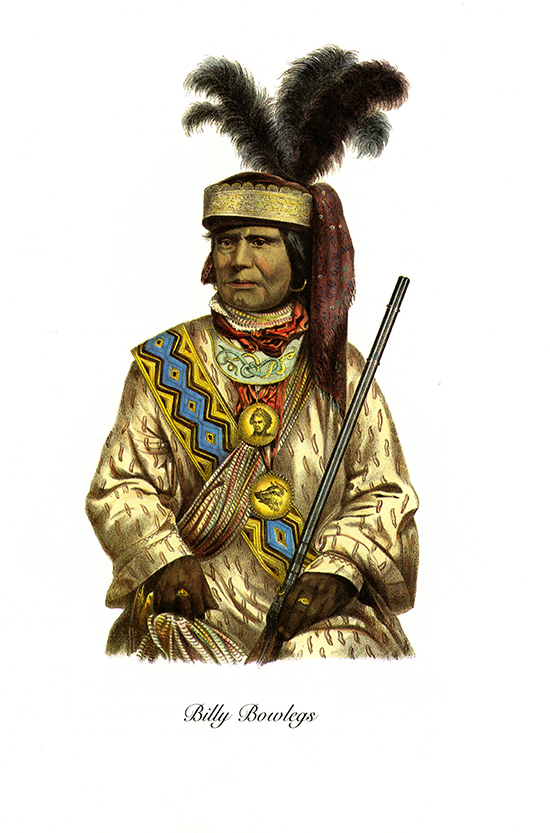 He resisted at first, but eventually moved to Indian Territory.

C: Chief Cowkeeper was the Hitchiti-speaking Oconee chief at Payne’s Prairie. He challenged Jonathan Bryan, who was trying to steal Native American land. He was torn between peace and war, but later decided to fight for his land.

D: Dunlawton Plantation Sugar Mill Ruins is a Seminole war site. It was destroyed in 1835. In 1846 attempts were made of reestablishing the sugar mill, however those attempts failed.

E: (The) Everglades was a safe place for the Native Americans during wartime. While the Seminoles knew the ways of the Everglades, the soldiers were lost.
F: Fort Brooke, located on the west coast, was significant in the Removal era. In March 1841, Wildcat, a war leader, went to Fort Brooke to have a meeting with the soldiers. It was in Fort Brooke that President John Tyler allowed the Seminoles to stay in Florida, but they were not allowed to leave their land except to go to Fort Brooke. They would receive no food or water.

G: Geronimo “Go-Tay-Thlay” was an Apache chief and a medicine man. Geronimo led his followers on a series of escapes from the soldiers. However, he eventually surrendered to General Nelson Miles and stayed in captivity until his death.

H: Hills Hadjo was a Seminole leader during the 19th century. He was an active part of the Seminole Wars. He was one of the chief instigators of the second uprising.

I: (The) Indian Removal Act was signed into law by President Andrew Jackson on May 28, 1830. This gave Jackson the Mississippi land in exchange for Indian land. Only a few tribes went peacefully, many resisted and later agreed, but only a few stayed in their homeland.

J: (President) John Quincy Adams picked up on former President James Monroe and Secretary of Wars John C. Calhooun’s policy toward the Indians. He was determined that there should be no forcible removal of any tribes. Adams forbade the state of Georgia from surveying the Indian lands.
K: (Chief) King Payne was the son of Chief Cowkeeper and one of the leading chiefs in the Seminole Tribe. He led his people against the Spanish and the Americans during wartime.

L: Lake Okeechobee was desired by many soldiers during wartime, however none were successful. Not long after the soldiers were rejected, Seminole resident James B. Brighton used the land near the lake and made another reservation.

M: Muscogulges was the referred name to the Creeks, Seminole, Yahmasee, Tuckabatchee, Hitchiti, Koasati, Timuca, and many other ancient tribes. Rather than each being named, soldiers referred to the Native Americans as Muscogulges.

N: Naiche was the last chief of the Chirricahua Apache Tribe. He was the youngest son of Chief Cochise. He spent 27 years in captivity along with some of his people, until he was released in 1913. Naiche and his people continued to fight bravely against the U.S. and Spain until death did them part.

O: Osceola “Billy Powell” was a military leader during the Seminole Wars. He stood up for his people, as a force to be reckoned with. If it wasn’t for Osceola we wouldn’t be here today.

P: “Payne’s Prairie Preserve State Park” is land that was home to many Seminoles. It was the site of action during wartime, and now has a visitors center on the war.

Q: Quanah Parker was a war leader of the Comanche people. He fought in the Red River War during 1874-1875 with Colonel Ranald S. Mackenzie.

R: Rain-in-the-face was a Native American leader. He was a warrior at a young age: having fought in a December, 1866 battle against Captain William Fetterman’s troops during the Civil War.

S: Seminoles are Native Americans, many who live in modern day Oklahoma, but the descendants of the unconquered still live in Florida. The Seminole Tribe of Florida is a federally recognized tribe.

T: The Trail of Tears was the name given to President Andrew Jackson’s actions toward the Native Americans to vacate their lands. He forced them to go to Indian Territory. A Choctaw Indian told an Alabama newspaper that it was a “Trail of Tears and Death.”

U: The Ute people are the oldest residents of Colorado. Their home is in the mountains and vast areas.

V: (Captain Joseph) Van Swearingen was recognized because of his actions during the Battle of Okeechobee. His brave actions lead him to death. U.S. Army troops made a fort in Martin County, Florida during the Second Seminole War and named it after him.

W: Wilma Mankiller became the first female Cherokee leader. She won many awards for her leadership, includingWomen of the Year in 1986.

X: Xega or “Jaega,” are Indians who identified by 16th century Spanish explorers. There is little information about the Jaega Tribe, but there are known links to the Ais Tribe. The Jaega Tribe and the Ais Tribe are joined together by marriage. Just west of Boynton Beach in an area of agricultural reserve people have found what seem to be Jaega remains.

Y: Yoholo-Mico was a Creek Indian. He protested the Indian Springs Treaty. He was the head man of Eufaula town, as well as an outstanding warrior.

Z: The Zunis are from New Mexico. Spaniards found their land and demanded they move out. Instead of submitting, the Zuni’s resisted. The Zunis are still a part of New Mexico today.