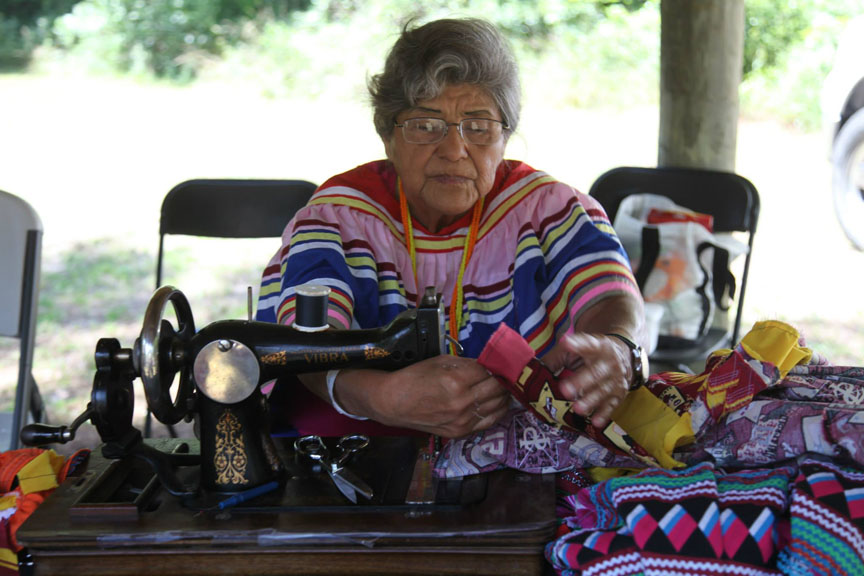 WHITE SPRINGS — Driving rains from weeks of unpredictable lightning and thunderstorms in North Florida caused the Seminole chickee builders to fall behind by the time Memorial Day weekend rolled around. So the planned new Ee-to-lit-ke Seminole Village, situated in the center of the Stephen Foster State Folk Culture Center State Park, was not quite ready for the 61st annual Florida Folk Festival.

But that didn’t dampen the festivities or spirits of this event. The old village was built by Seminole craftsmen during the 1950s on a site where Seminoles used to camp in the 1940s just outside the entrance gate to the park. After a few repairs directed by Chairman James E. Billie and chickee builder Bobby Henry, the old village was used one last time.

Beneath old chickees of varying sizes, Tribal members demonstrated crafts and culture, while musicians strummed guitars onstage beneath a chickee – one of 13 stages of continuous music over the three-day event.

Resplendent behind tables filled with colorful authentic Seminole crafts, Bobby Henry and wife, Annie, daughters Linda and Barbara, and granddaughter Jamie demonstrated and sold their items. Bobby Henry, a recipient of the Florida Folk Heritage award, entertained old friends and festival patrons he had not seen in many years.

“It was great to see so many Seminoles at the Florida Folk Festival,” said Florida Park Service director Donald Forgione. “They have been an integral part of this festival since the very beginning. We can’t thank Chairman Billie and his Tribal members enough for all their support over the years.”

The 2013 Florida Folk Festival, sponsored by the Florida Department of Environmental Protection’s (FDEP) Division of Recreation and Parks, included many different aspects.

The festival served up a variety of foods, from the Beulah Baptist Church selling chicken pilau, grits, collard greens, cornbread and sweet potato pies to the jerk chicken and curried goat at the Island Café food truck. Cowboys snapped whips, blacksmiths pounded red-hot iron and visitors learned to play the harmonica and square dance, among many other cultural traditions.

“There’s so much,” said Florida folk musician Frank Thomas, a native of Clay County who lives on Rattlesnake Road near Lake Wales, “there’s not ‘nuff hours in the day to see it all.”

Thomas was one of several headliners at the amphitheater stage, where thousands gathered each night to watch Florida folk stars such as Jim Stafford, Jubal’s Kin, Billy Dean, the Bellamy Brothers, Mindy Simmons and Bing Futch, a flamboyant singer and songwriter who claims a heritage with the Seminole Tribe.