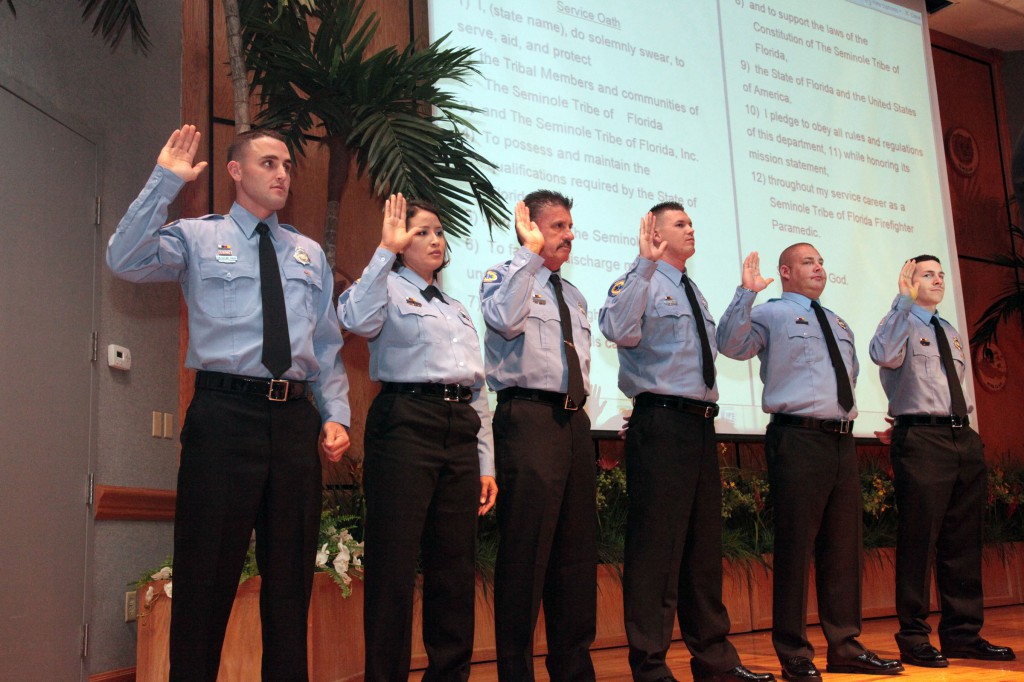 HOLLYWOOD — To become a member of the Seminole Fire Rescue Department, a candidate must complete a strenuous fire academy program and pass both the paramedic and firefighter state certification exams – not easy tasks.

Fire Rescue welcomed six new firefighters to its ranks at a graduation ceremony in Hollywood on May 23.

About 400 certified firefighters applied for the job, only 180 pre-qualified for testing with the Tribe’s stringent criteria, and the department hired only six. The new hires spent eight weeks training with the department to learn Tribal culture, the routines of working on different reservations and additional skills.

“We welcome you as new members of our family,” Fire Rescue Chief Donald DiPetrillo said during the ceremony. “These six are among the elite; they are 2 percent of the people who applied. It is our obligation to train you the best we can and give you the best equipment to make sure you go home safe to your family every day.”

Hollywood, Big Cypress and Brighton have fire stations; Big Cypress and Brighton also have wild land fire stations. (In 2009, the department assumed all wild land fire responsibilities from the Bureau of Indian Affairs.) The population on the reservations can swell to 22 million per year as people visit casinos, attractions and hotels, but the department has agreements with nearby municipal fire departments to provide mutual aide, as needed.

“You have to have knowledge of a broad spectrum of services and love what you do to be a good firefighter,” DiPetrillo said. “We’re really an emergency services agency. It’s a solid profession, the work never stops and there is always a need. At the end of the day, you’ve made an impact.”

“It’s a dream come true,” said Jeff Jones, of Plantation. “Learning about the culture of the Tribe was an eye-opening experience, and I’m proud to be part of it.”

“I’m looking forward to a good career for many years to come,” added Sal Zocco, of Pembroke Pines.

Dan Ferris grew up near the Hollywood Reservation and remembers coming to play basketball and baseball on the reservation as a boy.

“I’m familiar with the culture and know certain rules of the Tribe which will have an effect on how I’ll do my job,” Ferris said. “I’ve worked really hard for something I’ve wanted my whole life and finally got to it. It’s amazing.”