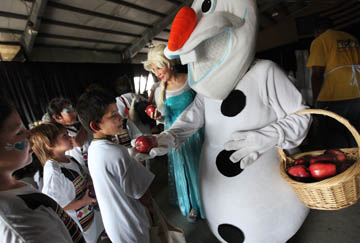 BIG CYPRESS — Many of the nearly 300 people who streamed through the Big Cypress Health Fair April 17 at Junior Cypress Rodeo Arena probably thought they knew everything about the path to a healthy life, said Edna McDuffie, community outreach coordinator for the Seminole Health Department.

“But we just need to remind everyone, every once in a while, to keep on track,” McDuffie said.

Passports to health – sheets of paper that listed booths – were provided at the fair’s entrance. Participants who visited at least 15 booths were eligible for a special thank you card from Health Director Connie Whidden and various surprise gifts.

Similar health fairs are planned for Brighton (May 28) and Hollywood (June 9).

“We were very happy to have to add tables at the last minute,” McDuffie said.

“It’s as simple as this: If you can learn to handle your bills, you will have less worry and less stress. We know stress can cause health problems,” said Wilma Noah, of NLC.

“People came back to me saying they found out they were pre-diabetic. That’s what it is all about to us because that puts a person on prevention,” McDuffie said.

A handful of booths put the spotlight on foods as vehicles toward well-being.

Children from Ahfachkee School were treated to free apples hand delivered to each from Disney characters Elsa and Olaf.

And just in case visitors had too much fill of trail mix, parfaits or apples, Ah-Tah-Thi-Ki staff members, Roberto Luque, a geospacial analyst, and Eric Griffis, the Museum’s oral history coordinator, were on-site to promote the Museum’s 1.2-mile boardwalk that can be used for sightseeing and exercise.

“We have the boardwalk and at the end of it a native, traditional garden – and we need volunteers. People can get a workout and do something good for the community,” Griffis said.