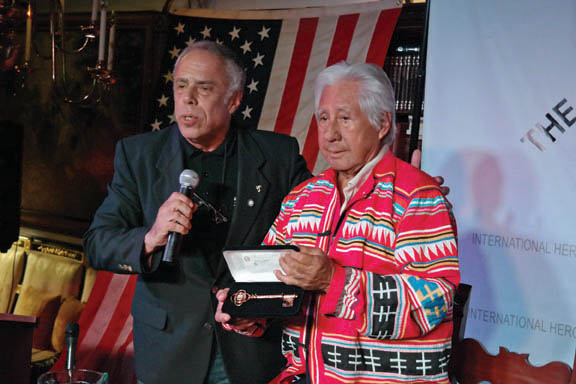 MIAMI — The Seminole Tribe’s Joe Dan Osceola, along with two other individuals, was presented the first International Hero Award July 16 by the Calle Ocho Chamber of Commerce USA.

The award honors businessmen who have excelled internationally in their trade for more than 25 years, exchanged culturally with other countries and set an example for future leaders.

Osceola was recognized for his service to the Seminole Tribe and United South & Eastern Tribes (USET), which is dedicated to promoting Indian leadership, improving the quality of life for American Indians, and protecting Indian rights and resources on tribal lands. Osceola served as president of the Seminole Tribe of Florida, Inc. from 1967 to 1971 and served as the first president of USET in 1969.

“Over 30 years ago we began with only four Tribes: Seminole, Miccosukee, Choctaw and Cherokee,” Osceola said during the event held at the Cuba Ocho Art and Research Center. “Now it’s 32 Tribes in the Southeast.”

Osceola has been an entrepreneur since leaving government work. In 1979, he opened the First American Tobacco Shop, and in 1984, Osceola and his wife, Virginia, opened Anhinga Indian Trading Post, where they sell not only Seminole crafts but also authentic Indian arts and crafts from all over the country and Canada. He has operated a chickee-building business called Tiki Huts for the past 25 years.

The other two individuals honored were Prince Emmanuel Aderele from Nigeria, Africa for his ambassador work with his country and South Florida, and Luis Suarez, a Cuban-American who serves as curator of the Suarez Museum of Natural Science & History.